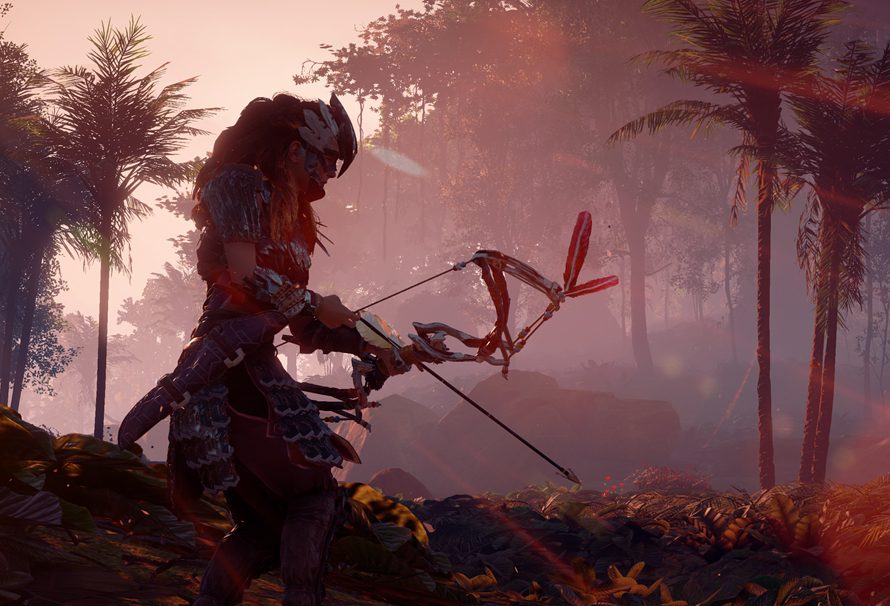 With the NewGame+ and Ultra Hard Mode coming to Horizon Zero Dawn, it’s a good idea to stock up on the best gear should you want to carry everything over to your Ultra Hard play through. Here are some of the best Armour, Weapons, and Gear which will help you when tackling the new game mode.

WARNING: Parts of this article may contain spoilers. If you haven’t jumped into Horizon Hero Dawn Yet, then why not check out our beginner tips here.

You need to kit yourself out in the best armour possible, and make sure you equip the best mods to that armour as well. The best Armour you can obtain in game is the is the Shield Weave Armour which puts even Master Chief’s overshield to shame. The shield weaver armour gives Aloy an overshield which has a short call down period once it has been depleted. This armour can absorb a surprising amount of attacks making Aloy pretty much invincible if used correctly.

Getting the armour is no easy task however, as you will need to track down a number of power cells scattered across the open world in order to gain access to a secret underground lab where the armour is hidden. Well it wouldn’t be much of a game if the developers just gave you the armour on a silver platter.

If you want more of a challenge when it comes to ultra hard mode, you can just skip the armour entirely and rely on one of the other armour sets within game. Personally I was a big fan of the Oseram Arrow Breaker Heavy Armour, as it gave the best defence and especially against projectiles. As well as the Shadow Stalwart Heavy Armour because it gave you a nice stealth upgrade plus gave you good defence against blindness, which was perfect for those watcher flash bangs.

Make sure you equip some good outfit mods too, the best tactic I found was keeping a couple of different sets of armour on you for different situations. For battles against other humans I suggest going for more fire resistance and stealth modifications to keep yourself guarded against those pesky fire arrows and pyro enemies. Make sure you also keep corruption modifications handy as well as these will help you when trying to take down corrupted machine zones.

When it comes to weapons you have plenty to choose from, so it is best to really get a feel for what you are most comfortable using. For example, during my play though I hardly touched the slingshot and focused heavily on the Ropecaster and the Tripcaster in order to take down machines effectively.

When it comes to the Ropecaster it is simply a case of getting your hands on the strongest one possible so buy the Shadow Ropecaster as soon as you can. Even though the Ropecaster is a passive weapon of sorts it still does inflict 150 tear damage so you could use it to take off components as well.

The Tripcaster is one of my favourite weapons and possibly the handiest weapon on your arsenal. Make sure you get your hands on the Shadow Tripcaster as soon as possible as this will allow you to lay 3 different types of trip wire. Electric, Blast and Fire wire will take down machines with ease, just make sure you pinpoint the machines weaknesses before you select the tripwire you want to use.

There are three types of bow to choose from in Horizon Zero Dawn, each one has their own attributes and players should consider which bow to use before launching themselves into battle.

For most situations players should try and get their hands on the Lodge War Bow as soon as possible. This bow will allow you to use elemental arrows such as shock, freeze and corruption. If you combine this with the Shadow Tripcaster you are able to inflict some hefty elemental damage to any unsuspecting machines.

The Shadow Sharp Shot Bow is ideal for those who like to snipe. This bow is built for pin point accuracy and it’s ammo types are designed just for that. This bow is perfect for component harvesting as well and getting the most loot. out of the machines.

The most effective armour and weapon combination I found was the Shadow Stalwart Heavy Armour which had maximum fire and corruption resistance mods. This gave me good stealth whilst giving me a helping hand should I get spotted. I also heavily relied on the The Shadow Hunter Bow for taking out enemies quickly and the Lodge War Bow for dealing high elemental damage as well as corruption arrows to momentarily corrupt machines to do my bidding. Lastly I would use the Shadow Tripcaster a lot to lay down the perfect elemental traps for unsuspecting machines, or quickly lay the trip wires down in front of charging enemies.

If however you just want to take on the world just find yourself the Shield Weave Armour and hit the ground running.

Have you played Horizon Zero Dawn? If so what were your favourite weapons and armour. let us know in the comment section at the bottom of this page.