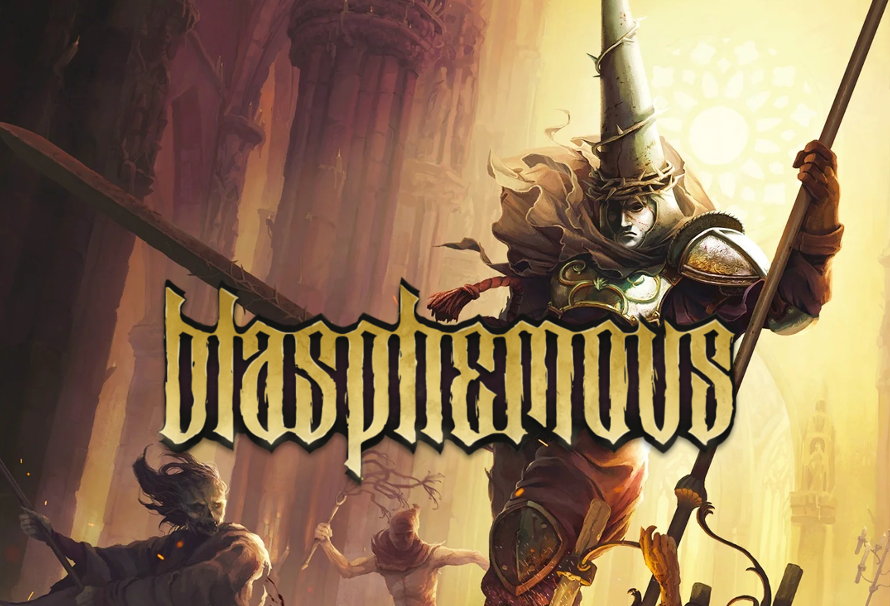 There are no shortages of Souls-like games to choose from these days. Consequently, when a new one comes along it needs to stand out; to do things a little differently to entice players in. Blasphemous looks to do just that as you enter the cursed land of Cvstodia.

Blasphemous started life on Kickstarter back in June 2017 where is raised over $300,000 and smashed it’s target to successfully fund development of the game. Clearly people were very interested in playing this game and it’s not hard to see why.

In Blasphemous you play as the The Patient One – the sole survivor of a massacre known as the ‘Silent Sorrow’. You now find yourself trapped in a cycle of endless death and resurrection. It’s down to you to free the world from its affliction.

Explore a nightmarish world of non-linear levels covering vast and varied landscapes filled with hellish abominations, deadly traps and challenging platforming. Travel deep into the twisted regions to discover the secrets hidden within.

Throughout your journey you will discover relics, rosary beads, prayers and sword hearts that will unlock new abilities and powers to help you overcome some of the terrible bosses you will face.

With the discovery of new items that you find and loot from the world you will be able to experiment with different styles of play to find something that suits you.

It’s hard not to notice the distinctive art style spread across Cvstodia. As a result you’ll come across heavy religious themes throughout the game, both in the characters – friend or foe, you encounter and the lore surrounding Cvtodia itself. It’s not just dark and oppressive dungeons you’ll be exploring though.

There are a number of distinct areas each with contrasting visual styles across the whole game. From snow-covered mountains and sandy dunes to the dungeons we know and love from souls-like games gone by, you won’t be short of new places to explore. With rich lore spread throughout the game, the more you progress the more about the curse simply known as ‘The Miracle’ you will discover.

When I say this game has brutal combat I mean it. Wield the sword Mae Culpa – a weapon born from guilt, and use it to perform devastating combos in fast paced and skilled combat. Limbs will be severed and blood will be shed as you fight through Cvstodia. Don’t let the art style fool you, this game is full of gore and isn’t afraid to show you.

Blasphemous is obviously heavily influenced by other souls-like and metriodvania games using a lot of familiar mechanics. Expect to see fewer checkpoints as you play. Meaning death will be punishing and require backtracking or making your way through the same areas multiple times. There’s also an estus flask like healing system, but there is no stamina based combat.

Some of this might put people off, but it definitely isn’t in the realm of the toughest of those in the genres and is – dare I say, easier. That’s not to say it’s a cake walk, you will still face tough challenges that will test even the most seasoned of souls-like players.
Blasphemous is out now and is already receiving widely positive reviews.