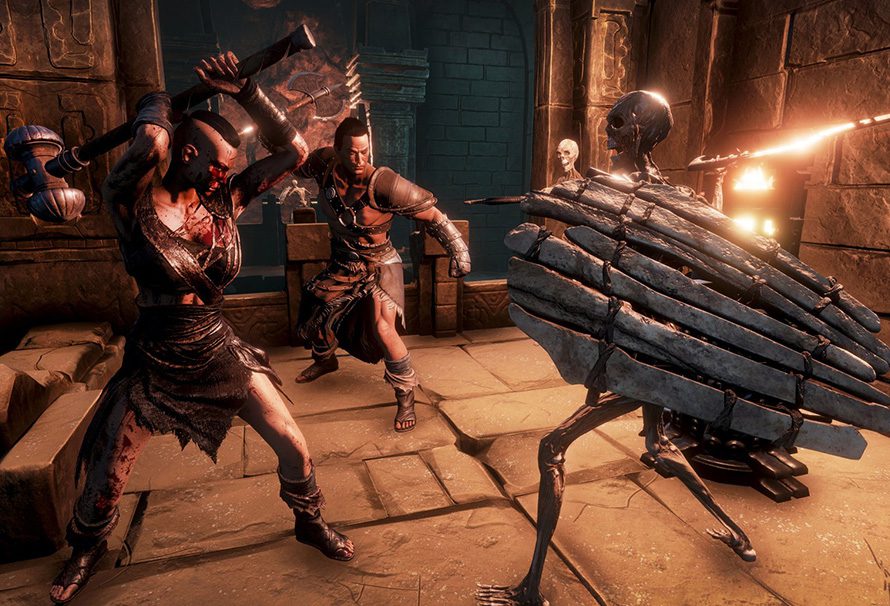 If you like your games epic, the chances are that you’re properly pumped about the imminent release of Conan Exiles. Funcom’s open-world survival game, set in the universe of the much-loved Conan the Barbarian, as defined by the books of Robert E Howard and once portrayed on celluloid by Arnold Schwarzenegger, is poised to exit its Early Access period (which has lasted more than a year) and seek fame and fortune in the real world. If ever a game promises to be epic, Conan Exiles is it.

Story-wise, Conan Exiles’ watchword is definitely epic – it kicks off with your character nailed to a cross, exiled to a harsh world which takes in deserts, icy regions and every form of environment in between. Luckily, Conan himself is at hand to cut you down and rescue you, but from then on, you’re on your own, and it’s up to you to find a way to first survive and then prosper in an unforgiving and harsh world.

Conan Exiles is also epic in its sheer scope. It takes place in a vast and varied environment, replete with dungeons. It involves combat, farming, castle and city-building, sieges, dungeoneering, establishing a religion (and taking on other religions), enslaving bandits to learn new skills, boss-battles and full-on wars. It lets you take on other players in PvP, or forge alliances with them to prosper in PvE gameplay. Or you can choose to play out your own story in splendid isolation on your very own server.

It’s fair to say that there aren’t many games which spend over a year in Early Access – but we’ll all be thankful that with Conan Exiles, developer Funcom chose to take such an unconventional approach. That’s because, during that period which stretched back to January 2017 on Steam and August 2017 on Xbox One, Conan Exiles has been altered and improved beyond all recognition. So let’s examine what, precisely, you can expect from the game as it prepares to ship on PC, Xbox One and PlayStation 4.

Since Conan Exiles entered its Early Access period, Funcom has pretty much ripped out the combat system and started again from scratch (dedicating vast resources to the process). The result is deeply satisfying: each weapon (running from daggers up to hammers and greatswords) has its own attacks and animations, and those attacks include the likes of lunges, sweeps, cleaves, slashes and dashes. Plus there are light and heavy attacks that can be chained, to culminate in spectacular finishing moves. Combat-wise, Conan Exiles stands comparison with the highest-budget action-RPGs.

In Conan Exiles, your journey begins in an inhospitable desert called the Exiled Lands. When the game entered Early Access, that was the only environment it boasted, but it was soon augmented by a wintry land entitled the Frozen North. Conan Exiles’ emergence from Early Access will add two new areas beyond The Frozen North: The Volcano and The Swamp.

The volcano is the first area you’re likely to encounter, as it sits quite conspicuously above the Frozen North, with rivers of lava running down its slopes. Inside the volcano, you will find ruins and the Well of Skelos, from which an ominous light emanates. There, you can use a forge to create obsidian weapons. The volcano’s dungeon is particularly challenging, having been balanced for max-level characters.

To the east lies the swamp, replete with deep jungles, miasmic marshes and a sunny coastline which may look idyllic but is populated by pirates. The swamp offers a whole new set of monsters along with a raft of places to explore, including the Pagoda of Boundless Lusts and Jamilia’s Liberty, a beached ship which has become the home of the Black Hand pirates.

Elsewhere in the swamp, you’ll find the Forgotten City of Xel-ha – the ruins of an ancient Lemurian city – and the Palace of the Witch Queen dungeon. It’s even possible to build an entire city in the swamp’s giant trees, and the whole area has been designed for level 20 to 40 characters.

Another new feature Funcom has added to Conan Exiles, which greatly increases the scope of its gameplay, is the Purge. Once you start establishing an empire by building settlements and cities, the Purge will begin to kick in periodically. When the Purge occurs, you will find yourself under attack from the likes of frost giants, locusts, the undead, relic hunters, gorillas or countless other types of enemies: the type of Purge you get depends on where you have built your settlement.

Only the southernmost areas of The Exiled Lands – that is, the first areas you explore – are immune from the ravages of the Purge, so at least your first faltering attempts to create defensible settlements won’t have to contend with that. But the longer you play, the more you build and the more enemies you kill, the quicker your Purge meter will fill up. Luckily, you get plenty of warning of an incoming Purge, and successfully defending against a Purge can yield all manner of legendary weaponry and loot.

The Purge also offers an illustration of how configurable Conan Exiles is: if you’re playing in single-player or on a private server, you can turn the Purge off, or can define the intensity of Purges by tweaking settings like strength, duration and the number of waves.

During the Early Access period, Funcom also revamped Conan Exiles’ attributes system, so that for every ten increases in each attribute, you get a perk that unlocks a special ability. For example, getting 50 points in the Agility attribute unlocks a double-jump, and amassing 40 points in Strength means your heavy attacks will do 25 per cent more damage.

Armour also plays into the attribute system – collecting exotic armour sets from the various cultures will increase your attributes and help you earn your perks quicker. And Funcom has introduced the concept of warpaint, which also adds to whatever attribute you have selected: you can only wear one warpaint at a time, but warpaint provides a handy means of getting that most-wanted perk more quickly.

Gear-wise, Funcom has added a huge amount to Conan Exiles during its Early Access period. Legendary weapons with unique bonuses abound, and the best way to get hold of those is via the game’s world boss system, which lets you take on massive bosses and reap the rewards in loot.

Cementing its reputation as a no-compromise game, Funcom has tweaked Conan Exiles so that when you play it, you no longer heal over time, so eating food and drinking potions is very important. Funcom introduced farming to the game during Early Access, in order to make resource-gathering easier.

Other new additions for launch

Conan Exiles’ launch will see a new religion added to the game, centred on Derketo, who is the goddess of both fertility and death. Derketo’s giant avatar is definitely a sight to behold: she’s half beautiful woman and half rotting corpse. Funcom also added a fast-travel system to the game, in acknowledgement of the huge expansion of the map. For a general overview of what Funcom added for launch, you might want to peruse this blogpost.

Because of Conan Exiles’ sheer ambition – offering support for PvE and PvP, as well as the chance for players to create their own custom servers – its server situation is pretty complex. Luckily, Funcom has chosen to explain it in this blogpost.

The key pieces of server-related information are that the full launch servers will go live on 12.00pm UK time on May 8. There will be 225 servers at launch, across several regions. And three types of servers will be available to players, namely:

Hopefully, that should help you to prepare for immersing yourself in the irresistible world of Conan Exiles. May your exile prove to be an epic and long-lasting adventure.