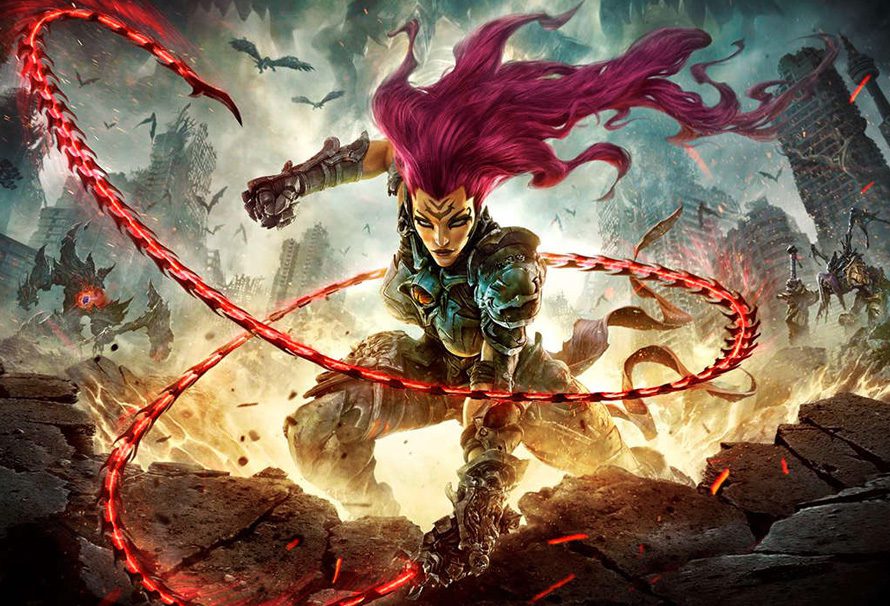 Darksiders III arrives tomorrow the 27th of November. It’s been quite a while since the last Darksiders game came out, barring definitive editions and remasters, it’s been a whopping six years.

So it’s entirely understandable that you may have forgotten just what’s going on. Have no fear, it’s time to get your lore hats on and let us guide you through the previous two games in the Darksiders series and let you know just what the hell is going on.

In news that will surprise precisely no-one, Heaven and Hell don’t get along.

To stop them from fighting so much the Charred Council was created. To maintain order and balance they formed a group of warriors, the Four Horsemen of the Apocalypse. The first game in the series focuses on War, who turns up in the present day where the fight between Hell and Heaven has kicked off on Earth, killing quite a few humans (aka all of them).

But oh no! War isn’t supposed to be there, the Seven Seals are unbroken and the horsemen aren’t supposed to have ridden yet. As a result of War’s arrival, Abaddon the general of Heaven’s army is struck down and the Charred Council nab War to give him a grilling. War protests his innocence and asks to be sent back to find out what the hell is going on. They allow this, on the condition that he takes along a Watcher (called The Watcher) and that he’s also depowered, because reasons.

Off War goes and finds that a hundred years have passed since the apocalypse. Demons have pretty much taken over, led by a colossal demon called The Destroyer. Meanwhile Heaven’s soldiers are running a guerilla war against Hell, to little avail.

A lot of fighting goes on, War kills a load of demons and finds Azrael, the Angel of Death. Azrael tells War that there was a conspiracy to start the apocalypse early. A group of Heaven’s angels, including Azrael, Abaddon, and Ulthane, wanted to get the apocalypse out of the way so that Heaven could win and everyone could relax and have a nice time. War turning up threw a spanner in the works though, and well, now look at the mess.

After freeing Azrael from imprisonment, War goes off to talk to a tree. The Tree of Knowledge in fact.

The ol’ smart tree lets War know that there’s worse news. Not only did Heaven conspire to start the apocalypse early, they collaborated with the Charred Council who knew that War would descend to Earth and kill all their enemies in the pursuit of the truth.

Shocking news, I know. It’s also revealed that The Destroyer is Abaddon, War’s old friend from the start of the game. Learning how to defeat The Destroyer from Uriel, an angel voiced by the improbably named Moon Bloodgood, War sets off to give it a damn good thrashing.

The Charred Council and The Watcher betray War but not before Uriel and War kill The Destroyer. All’s happy, the end.

Well, not quite. Heaven and Hell both decide to go have a scrap with War, but not before Fury, Strife, and Death all turn up.

The sequel to Darksiders runs along the first game, as Death tries to erase War’s ‘crime’ and resurrect humanity. He travels to the Icy Veil looking for the Keeper of Secrets so Death can prove War’s innocence. Alas things go awry because it’d be a short videogame otherwise, and Death gets his soul-filled amulet embedded in his chest and plonked on a realm called the Forge Lands.

The Forge Lands is a place of plenty, where a race called the Makers who made Creation live. Again though, things have gone a bit wrong. The Corruption has overrun the realm and things have gone pretty wrong for everyone involved. But that’s OK, Death’s here, and Death is good at kicking arse.

Corruption attacks Death, Death kills a load of Corruption, finds a massive Guardian that is meant to protect the Makers, finds out it’s Corrupted, kills it. So far so Death.

But oh no, the nephilim are angry with Death. See for the Horsemen and the Charred Council to get their power, Death killed all their race and imprisoned their souls in his amulet. So understandably, they’re peeved and they’re letting Death know. They also caused the Corruption, so they’re bad news for everyone.

Death travels to the Land of the Dead where he finds that in order to resurrect humanity, he needs to find the Well of Souls. This well has the power over life and death, and within it souls are cleansed and sent out to be reborn. To access it, Death requires two keys: one in the hands of the angels, the other in demons’ hands.

Off he pops, time to kill some angels who have been corrupted by, well, The Corruption, and get his first key after a brief trip back to Earth. Next up he heads to the demon lands where the Corruption is causing trouble again and here he meets, fanfare please, Lilith. His mother.

More fighting ensues and now Death has two keys. Entering the Well of Souls he meets the nephilim who was taunting him earlier who proceeds to taunt him. Death has enough of this taunting, so gives the smackdown to the nephilim, sacrifices the souls in his chest, and resurrects humanity.

The end of the game recreates the ending scene from the first with Death, Fury, Strife, and War all about to face off against both Heaven and Hell. The End.

Lucifer isn’t happy that humanity’s back. The Actual End.

So there you go, everything that’s happened in the last two games. Are you ready for Darksiders III now? Let us know in the comments below.