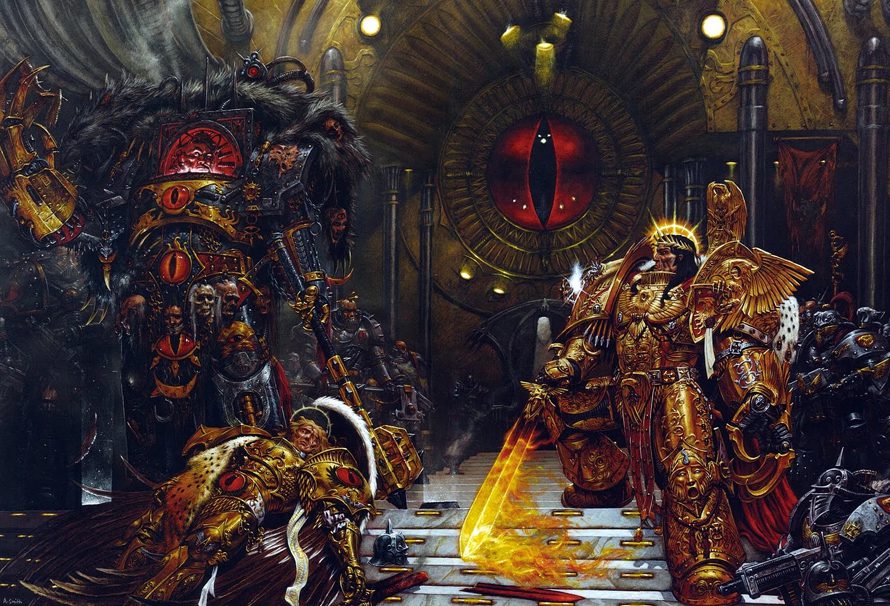 “In the grim dark future there is only war.”

It has been ten thousand years since Horus led his dark crusade across the galaxy, burning his brothers and setting the Imperium ablaze.

The remembrancers will tell you that the so-called traitor legions turned against their father, their god, and led the galaxy into pain and suffering and a nightmare that lingers over us all. The Legiones Astartes will tell you that their former brothers are twisted by the warp, the Space Wolves will tell you it is Maleficarum that brought the heresy. The Inquisition will tell you that it is daemons, xenos, unsanctioned psykers, heretics, and mutants that caused the rift in the Imperium, a rift that can only be sealed with blood.

The Emperor though, the Emperor will tell you nothing. He is a withered corpse atop a throne of gold, barely alive, barely cognizant.

It is not enough.

The heresy, the ten millennia of torture, the pain humanity and the galaxy has suffered all lies at the feet of the Emperor. He deserve to suffer, and he deserves to know his creation, the Imperium of Man, will fall.

Look back through time, look back to ten thousand years ago, to the time of the nascent Imperium spreading its wings across an entire galaxy. Look at the Emperor as he strode across planets, a golden titan, bringing world after world under the flag of his imperial eagle. Look at the godhood he claimed in all but name. He led us all with the promise of a shining future and a home for us all.

A million worlds lent their support, their lives to the dream of the Emperor, and he lied to us all. Was he a god? Was he light made flesh? He denied us worship, he told us he wasn’t a god, but then acted with a god’s powers and a god’s arrogance. How could we not worship him? How could the entire Imperium not bow down in praise for this holy being?

Then we found them. The pantheon, the real gods. Beings so far beyond our experiences that the only word we could apply to them is ‘gods’, but even that does nothing to encompass their enormity. They exist beyond reality, beyond time itself. Four gods stand there, real gods, gods that grant powers and can reach into the hearts of men and see the truth that lies within.

This is why the False-Emperor must fall, and why our war of ten thousand years cannot abate. He sits still, a testament to the lies he told through his actions of his own divinity, his entire existence a blasphemy against the true pantheon of the ruinous powers.

The entire Imperium of Man rests on a foundation of lies, that there is no divinity and that the warp is evil and twists man into unnatural forms.

The pantheon has shown us the truth. Divinity is real, and it reaches out to touch us. We are behoven to serve it, and every day we spend not worshipping the divine powers of Chaos Undivided are a blasphemous waste. Look at the beauty of our marines, they are blessed by divine powers. Flesh no longer bound by the petty mind of a half-dead Emperor, they burst out in beautiful ways, their armour mere shapes now as their holy forms spill out into the universe. How can you doubt the power and beauty of Chaos when looking upon our new forms? We are the holy right hand of our gods, and the Imperium will fall before us.

Even our Primarchs surpass those weak fools who stayed at the Emperor’s side. Whilst theirs are missing or dead, ours walk amongst us, living demigods whose forms and purpose are blessed by our holy pantheon.

Fulgrim is a divine serpent, devoted solely to pleasure and Slaanesh. Perturabo led his Iron Warriors into the depths of the Eye of Terror to fortify our worlds against incursion. Lorgar, holy Lorgar, devotes his time to worship and contemplation of the divine. Furious Angron rides a tide of anger, slaughtering all in the name of Khorne. Mortarion is the child of disease, his plagues bringing change and ruin to the galaxy. Magnus scries from his eternal tower, a burning eye that blazes through time itself to gaze at truth.

Where are the true sons of the Emperor? Dead or worse, apart from the patrician child Guilliman, they are are nothing compared to the beauty and stark terror of the Primarchs who opened their eyes to the holy truth.

You see, chaos is eternal. Chaos is entropy. Chaos is change. Without chaos, there is only stagnation. You can try to stave off chaos, but we were here before the universe and will be here long after.

(Dawn of War III is available from our store right now).