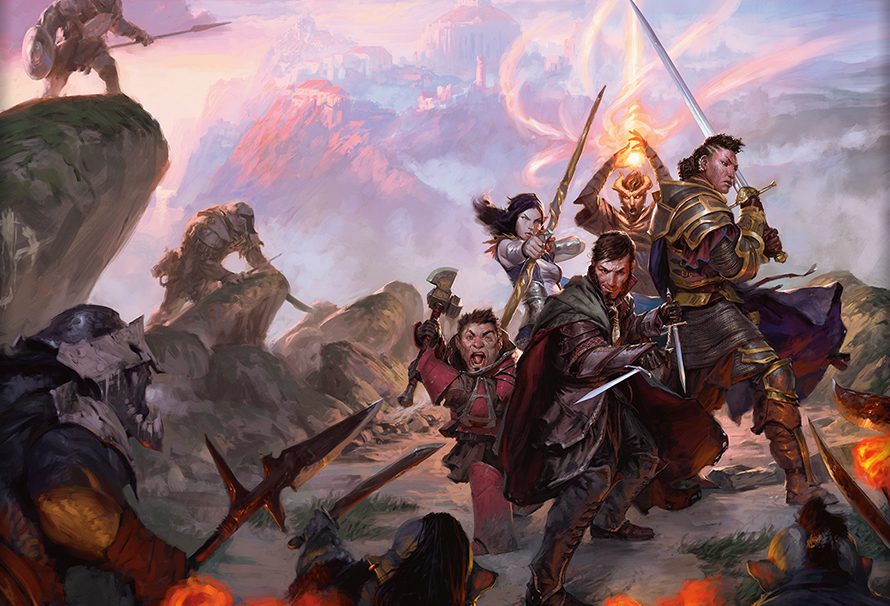 At the time of writing, there are at least three games of Dungeons and Dragons being played by various groups within Green Man Gaming – it’s clear that we like it a lot. I’ve written tips before on how to start a great campaign, and how to be a great roleplayer (we want you to be just great), but now we’d like to tell you the best classes in the game. This is absolute objectivity, and there is no reason to contradict what is hereby written, in the comments. Don’t even try it. Don’t.

And once you’ve figured out your class, head over to our new races ranked list to see what’s going to suit your brand new character.

It doesn’t really matter who’s playing the Ranger – it may or may not be yours truly – but they are one of the strongest classes. After a recent re-balance from Wizards of the Coast, the ‘Revised Ranger’ is not only a very strong martial character, but has a wealth of skills to use out of combat that can greatly benefit the party. Mine- er, I mean, theoretically you can have 16 Armour Class (AC), +7 to hit with your longbow, and enough Perception and Stealth to lead your party out of a Fey enchanted maze whilst blindfolded. You also get mad respect for basically being Aragorn. With an animal companion.

“You can run but let me ask you, what do you think will kill you first: the desert, the heat, my bow, or Mr Prickles, my giant scorpion companion?”

Paladins are your go-to wall of metal that’ll keep you safe. And even if they fail in that, they can heal you up all nice afterwards. A spell-casting tank with fearsome damage, the Paladin is one of the strongest martial classes there is. Outside of combat, you don’t have to be all Lawful Good anymore. There’s even options to be on a path of vengeance, or wanting to rule with an iron fist for the good of the land. In our group a level 2 Paladin did 68 damage to a skeleton in one strike. Said skeleton had 13 HP. Then the Paladin buffed himself and healed the unconscious wizard. Strong? Absolutely.

“Everybody should aspire to be a Paladin. For what higher cause is there than RIGHTEOUS FURY. A mighty hammer-arm anchored by an oath of vengeance. Every day is a new battle against the greater evil. Room by room, hall by hall, we clear the dungeons of the corruption that soaks the land. More bones remanded to the abyss, for even the dead my die again…”

If the Paladin is the front-line tank with some healing and support spells, then the Cleric is the front-line tank with lots of healing and support spells. One of the strongest healers in the game, they also benefit from wearing plate and wielding giant weapons just like Paladins. Where they differ though is their lack of damage. The weapons are more for show, since they’ll spend most of the time healing and shielding their more squishy comrades. But what healing. They also come with offensive spells from the get-go which can fill a gap depending on your party composition.

The Sorcerer, unlike other magic users, have innate magic that comes from within, and therefore do not rely on spell books and learning things. Instead, they summon great balls of fire from their own bodies, which they can augment to be even more powerful. If you want to sling spells and roast goblin fools, the Sorcerer is your best bet. Not only do you get high spell damage, but you have access to strong utility spells and use Charisma as your main attribute, meaning in social encounters you can also be your group’s ‘face’, instead of cowering at the back.

The Wizard is your all-access spell caster. Do you have a specific type of magic you like, whether it’s fireballs, illusions or raising the dead? The Wizard fills all and any of these rolls. They can be incredibly powerful and useful, if played correctly. And that is why they are in the middle of this list. They take a lot of preparation and study (somewhat appropriately) to be effective, and you could always be caught short with the wrong spells for the job. Still, if you don’t know what you want to do but you know you just want to make magic happen, take the Wiz.

“We’ve all got both light and dark inside us. What matters is the part we choose to act on. That’s who we really are.”

The Bard AKA Bill, Bardo, Skill-Monkey, is a swiss army knife of skills. Thanks to abilities such as Professional, it’s not hard for a Bard to be proficient in nearly every skill. This makes them fantastic out of combat, which is probably thematically for the best since they’re artists in nature. In combat they provide buffs and debuffs galore and can make themselves somewhat decent fighters. However you do have to sing and make music a lot, definitely one for you aspiring actor players with a gift for flowery speech.

The Druid’s biggest ability is that they can turn into animals. This gives them access to endless roleplaying silliness but also some combat prowess. If you don’t have a tank, why not turn into a bear and block the corridor, taking swipes at the enemy and taking all the damage? When you run out of health, you turn back into your normal self, who can still cast useful spells. If you wanted to combine the Ranger and the Wizard, you got Druid. Just make sure you have all the animal stats to hand. It’s a fun class but if you’re looking for the strongest, this isn’t it.

Oh, the Fighter. How many times are you skipped over because you’re considered “too boring”, or the player will be scared they’ll be called “too boring”? The Fighter is a broad class, just like the Wizard, and it’s limit is only your imagination. Ranging from knights on horseback, samurai, bandits and literally anyone from Game of Thrones, the emphasis is on you to create this character. If you don’t, you’ll get bored pretty quickly just hitting things over and over. We’ve already shown that many classes are strong martially, and fighters bring some utility to fights, but not more than others. No spells, not much skills, you could do a lot better.

Probably one of the most popular classes due to it’s classic status, the Rogue is a poster-child on the same level as the Fighter and the Wizard. Unfortunately, whilst the coolest (so so cool) it’s not necessarily the best. It has access to a lot of skills, but also tries to be a high damage dealer as well, but without armour. It’s an interesting but flawed mix. The Rogue doesn’t really top the Ranger or a Wizard once they get some good utility spells (like Invisibility), but it can be fun. Cranking up the sneak attack damage for those one-shot kills, or causing misdirection like Loki as an arcane trickster sub-class can definitely be great. Just please don’t be an edgelord about it.

“You know what’s great about being me? Basically everything. You just can’t argue with the blur of motion that is me in battle. A sword in each hand,sometimes also a lady in one or both hands. That’s just my style. Handsome. Dangerous. Charming. Modest.”

This is painful because Monks should be really cool. How many martial arts films have you seen, and how much do you want to play as one of those characters? Exactly. Sadly the Monk suffers from being outclassed by all our star players, much like most of the classes down this end. Then fun is in being able to punch a goblin 8 times until it explodes, before running across a lake with your twin tonfa glistening in the moonlight. Like the Rogue, you’re buying into the fantasy rather than the stats, which is perfectly alright. Also, it may just be me, but it’s really hard to play a Monk that isn’t a stereotypical martial arts film character.

“Empty your mind, be formless. Shapeless, like water. If you put water into a cup, it become the cup. You put it in a teapot, it becomes the teapot. Now, water can flow or it can crash. Be water, my friend.”

So you want to be Conan, I’ll give you Conan. The Barbarian is a fighter with less variety, and like the Monk, pigeon-holed by the archetypes it’s based off of. The Barbarian can go into a rage and do extra damage, as well as take less…which other classes can do by wearing armour or learning more spells. It’s very fun to be a character who goes into a rage and charges the enemy, but in a balanced party it’s more of a hindrance, and your out of combat presence is severely limited. Have you ever watched the bits of Conan between the fights?!

The Warlock sits at the very bottom of the pile, because the only thing it’s got going for it is Eldritch Blast. If you want 20 levels of varying power of Eldritch Blast, pick the Warlock. Frustratingly, the Warlock is actually significantly improved by multi-classing, where you take levels in another class as well. Take some levels in Fighter and you’ve got an Eldritch Knight, or a Rogue who can curse it’s enemies before plunging a knife in their backs. The Warlock’s reliance on a Patron is a cool roleplaying opportunity, but if you party is large you probably won’t get around to it.