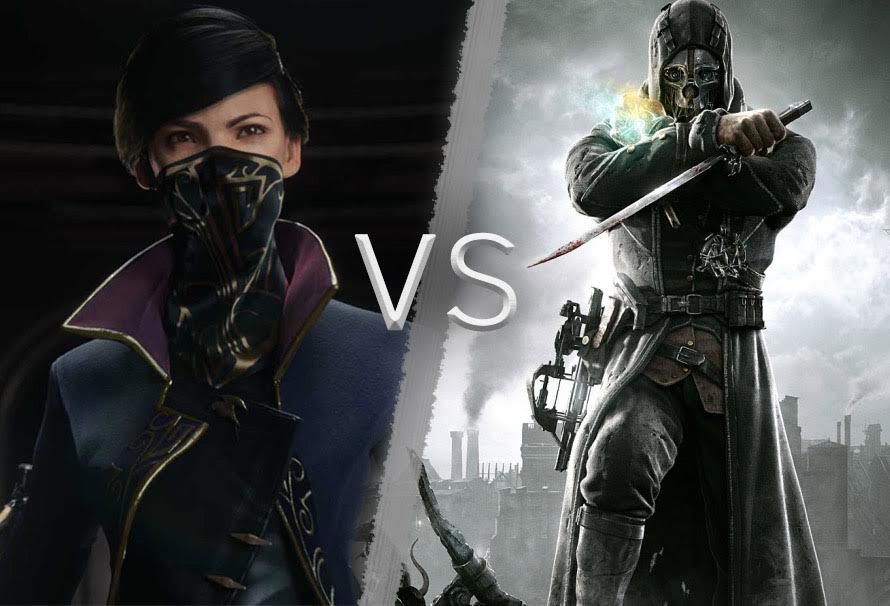 Who is better, Corvo or Emily? Here at Green Man Gaming the same question has been plaguing our minds for quite some time now. So we have decided to do a blog post with a difference! We are going to let you, the community, decide on who is the better protagonist.

Below you will find a detailed synopsis of each character, from story background to information about each of their abilities. Then next week we will let you, the community decide who is the better protagonist.

Without further a-do here is a break down for each character.

The main protagonist from the first Dishonored game is back! Before the events of Dishonored 1, Corvo was a Lord Protector to Empress Jessamine Kaldwin. He was stripped of this honour when he was framed for the Empress’ murder by the usurper Lord Regent Hiram Burrows. The Empress’ daughter, Emily is kidnapped and Corvo must clear his name and rescue her. On his quest he was given the ‘Mark of the outsider’ which gave him access to some unique magical abilities.

15 years after rescuing Emily (who we discover is actually his daughter) and defeating the Lord Regent, Corvo’s name has been cleared and he has been reinstated as Lord Protector to the new Empress, Emily Kaldwin. A new threat has reared it’s ugly head and threatens the new Empress’ reign, so it is up to Emily and Corvo to travel to the city of Karnaca to confront this new threat once and for all.

Corvo’s powers are a mixture of offensive and defensive skills that can work in both stealth and combat situations. His power are listed below:

Blink has been dubbed as Corvo’s teleportation move, and allows him to travel small distances within a ‘Blink’ of an eye. This is great power that really comes in handy when moving in the shadows and moving from one hiding spot to another. Blink is also great in combat situations as you can move from one enemy to another, it even works through glass. Okay so the glass breaks as you Blink though it but that in itself can be used as a great distraction.

This power pretty much does what it says on the tin. At first Bend Time only allows you to slow down time, once you have ranked the power up however you will be able to stop time completely. As you can imagine, this power is very handy for stealth missions. It can also be used to take out multiple enemies in combat and to dodge projectiles.

The only power that both Corvo and Emily share, Dark Vision primarily lets the player see creatures and item through walls. It also helps in stealth scenarios  as the power can visually alert the player to any sounds they are making. In Dishonored 2 this power has been upgraded slightly, sending out 3 pulses which are split 8 seconds apart as apposed to one big pulse in the first game.

Possibly one of Corvo’s most iconic powers. Devouring Swarm summons a plague of rats to either attack unsuspecting enemies or devour already defeated enemies, consuming their bodies without a trace.

Possibly one of Corvo’s most powerful tools in his arsenal, Possession lets Corvo possess animals and once it is ranked up he is able to possess humans. Different possessions give Corvo different options for both stealth and infiltration. For example if you posses a rat you can roam around relatively unseen through grates and along floors. If you possess a hound you will be able to move faster than usual. Possession can also be chained between creatures meaning you will be able to jump from creature to creature if you desire. Possession is a really handy power for Corvo and something every wannabe assassin needs.

This is a pretty handy power as this enables Corvo to fire a burst of energy which can blow enemies backwards. This power is increasingly handy should your target be standing on the edge of a building or in front of anything particularly hazardous. The power can also be used to remove obstacles and even shatter doors.

Now 15 years older than she was in Dishonored 1 Emily has grown up to be a very skilled swordsman and marksman with perfectly honed stealth and assassin techniques (thanks to Corvo’s training). She has also been bestowed with the mark of the Outsider which gives her access to some brand new magical techniques and skills which did not feature in the previous game.

Like Corvo, Emily’s powers are a mixture of defensive and offensive techniques that can be used in both stealth and combat situations, her powers are listed below.

Similar to Corvo’s ‘Blink’ ability, Far Reach allows Emily to transverse her surroundings at speed. Unlink ‘Blink’ however, the power needs to grab hold of something in for the player to be pulled towards it. This also helps Emily get to hard to reach places such as ledges. You can also sue Far Reach to pull enemies closer to you in order to nail those awesome sword executions.

The only true power that both Emily and Corvo share. This power is exactly the same as Corvo’s and really handy for navigation.

Possibly the ultimate distraction technique, Mesmerise tares open the fabric of space and time in front of it’s target and presents them with an image so powerful it renders them immobile. This power can ensnare up to 2 targets at a time. Be carful of your surroundings however, as other guards will notice something is up if they notice their colleagues are acting strangely.

Domino allows the Emily to link multiple enemies together. Once your enemies are linked then whatever happen to the first victim will happen to all other linked enemies. For example if you were to link three enemies with Domino and then shoot the first guard with a sleep dart, then the effects will link to the other 2 enemies. This power lets the player be pretty inventive with their kills so have fun with it.

Emily morphs into a shadow and has the ability to move at lightening speed across the floor. Much like when Corvo possesses a Rat she will be able to navigate through grates. She also has the opportunity to assassinate 1 enemy before she morphs back into her physical form.

This power allows Emily to clone herself and switch her consciousness between each clone. This is a great distraction technique which will always keep your enemies guessing. Emily can also use Domino on her clone and link it to any unsuspecting enemies.

So who do you think is the better character in Dishonored 2? Keep an eye out on Green Man Gaming’s social networks as we will be letting the community decide in the run up to the games release.