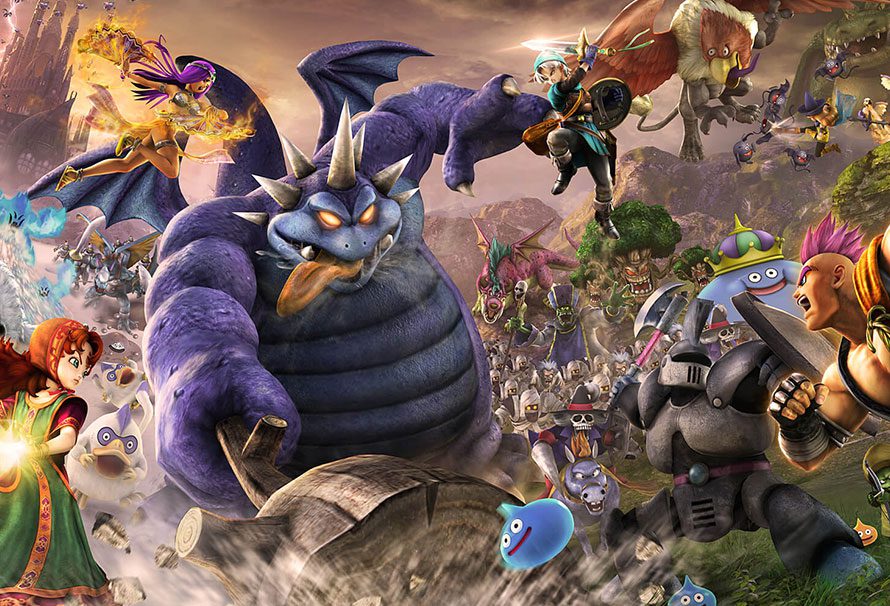 Dragon Quest Heroes II is coming out soon! It’s a hack ‘n’ slash RPG that takes you on a journey to a war torn world, where you might see a familiar face or two if you’ve played Dragon Quest games before!

Everyone loves Dante, at least that’s what you’d think given how angry a lot of people were over the rebooted Dante in DMC. Dante is a white haired chappy who enjoys slapping demons around with swords and looking stylish as heck when doing so. The Devil May Cry series really helped solidify the hack ‘n’ slash genre into what it is today, with the easy to pick up/hard to master combat that you see becoming a staple of action hack ‘n’ slash games.

DMC is awesome despite everyone being very frowny around it. It’s a reboot of the Devil May Cry universe and it features a much more asshole-y Dante without his trademark blond locks, but the combat is tighter than ever. Many fans were quite upset at this new direction, and as a result completely overlooked the game’s precision combat system that lets you chain together angelic and demonic moves into an armageddon of combat.

Now onto an RPG! Diablo III is the ur-hack ‘n’ slash RPG, it’s a big loot box of shining gold, raining treasure with every smackdown you lay on the millions of monsters you’ll chew through as you adventure across the world. Criticised on launch for being simpler than its predecessors, it really came into its own with the expansion pack Reaper of Souls, and now stands at the heart of the new wave of hack ‘n’ slash RPGs which appeared in the early 2010s.

The newest entry on this list! It’s not 100% a hack ‘n’ slash game, but due to its many fighting styles it definitely falls under the umbrella of hack ‘n’ slashery! Take your robot avatar on a lovely tour of Earth, and murder a whole heck load of robots while you do so. It’s got absolute rave reviews, and apparently has a plotline that makes you think and multiple endings depending on how many times you’ve completed the game. Nier: Automata is definitely a worthy entry to the pantheon of hack ‘n’ slash games!

From the same developers of Dragon Quest Heroes II, the Dynasty Warriors series sees you locate yourself into Chinese history, armed with many weapons and multiple characters, you plough your way through army after army. Despite being considered as a bit throwaway in some circles, the Dynasty Warrior series always has excellent and powerful fights, with the early games having combat that is somewhat reminiscent of the Soul Caliber series. They’re always good for a jump in, and if you want to destroy an army with your own two hands then the Dynasty Warrior series is always good for that.

So there’s some of our highlights! We bet we’ve missed LOADS, so let us know on social media or in the comments below!

NieR: Automata to get Game of the YoRHa Edition in February

Nier: Automata arrives on Xbox One