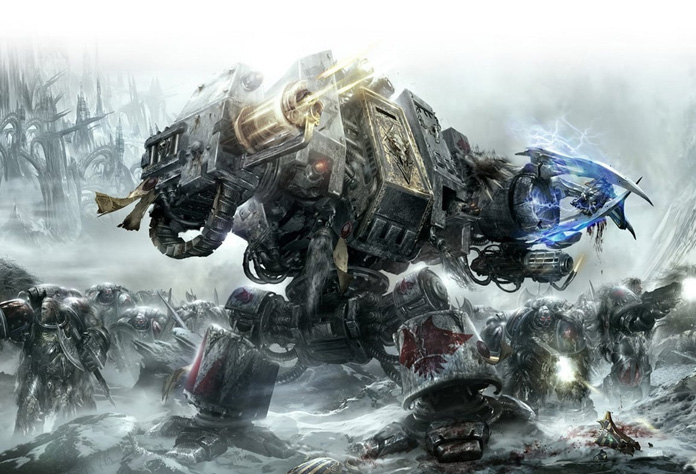 This year Games Workshop have issues one of their periodic refreshes of Warhammer 40k, which has had a huge effect on the game.

The rules have been simplified, the plot is moving on in the world, and there’s new models and game boxes available. All this means that now’s one of the best times to get involved with Warhammer 40k, and thankfully there’s a few of us here in the office who mysteriously have decided to get back into 40k at the same time!

So here I am, with my Warhammer Friends Olly and Milo, and we’re going to lead you through our advice about how to start getting back into Warhammer 40k, come join us. Come, play tiny people. It’s calling to you.

You’re going to want an army, that’s how the game works. Without an army you’re not playing 40k, you’re just musing about 40k. But what army?

The first advice we have for you is; don’t overthink it. If you think an army is cool and you like their backstory (the fluff), then go for them. Don’t sit there wondering who’s best in a fight or thinking about what all the stats are, that can come later. Just look at the different models and if you want to, read their backstories, and then grab whatever you think is cool.

Don’t even think about stuff that might be coming out in the future. If you think something’s cool today, you’ll think it’s cool tomorrow. Get things you love and you’ll love them forever.

So go with your gut, because then you’ll have something you love, today and tomorrow.

OK Step 1 works if you’re like me, I’m wanting to play the game for narrative and social reasons, and also because the Word Bearers were right.

If you’re wanting to win and win HARD, here’s Olly with some tips before you buy:

“It’s a big decision to pick an army and the units you want, if you have the chance, you should play with other people’s armies just to see what they play like. No amount of rule-reading will teach you how the armies will play out. You may like orks thematically and visually, but if you cringe every time you lose a model on the battlefield then you don’t have the facial creases spare to lose the 40 you’re going to need to lose in order to win. Try out fast armies like Eldar, slow ones like Necrons, and find out if you really care for space marines or not. There’s a good chance you’ll get sucked into buying some space marines at some point, you should probably find out if you actually like to play them.”

So by now, you should have an idea about what you want to play. Time to move onto the game itself.

Step 3. Don’t Be Afraid To Walk Away

If you’re very lucky you’ll be playing Warhammer 40k with your friends. If you’re not so lucky you’ll need to find someone to play with, which can be difficult.

Approach your local Games Workshop if you have one, if not try to seek out a local group you can join in with. There’ll be message boards or Facebook groups, they are out there just they might take a little finding.

Then go and meet them and when you’re feeling ready, jump in for a game.

But, and this is very important. Don’t be afraid to walk away.

If you’re not enjoying yourself, if you’re feeling bad, if they’re making ‘jokes’ you’re uncomfortable with, if you’re hating the game because of them.

Walk away. You don’t have to put up with anything and Warhammer 40k has a huge amount of people playing it, especially now. There’ll always be someone else you can play with, the right group is out there so just find them!

Step 4. Don’t Be A Stickler

We’re back to Olly for some advice about rules:

“The rules are vast, and you aren’t expected to know all of them. Instead of interrupting play with rules checking and page-flipping, roll a dice to settle disputes, or take the thing that sounds most right. We didn’t know if psyker spells needed line-of-sight, instead of looking it up we just decided that powers manifesting in the warp wouldn’t require the caster to see all of the opponent. Turns out we were wrong! But we looked it up after and learned the right way to do it, but it didn’t ruin the game. If one person is more experienced, then they should give the newer players benefit of the doubt and let them retry things (to an extent).”

It’s good advice, don’t take it too seriously, at least at the start. You’re a learner and even if you’ve played years ago, things have changed and you’ll take time to get up to speed. So have fun first and foremost. THEN crush your foes under your iron shod feet.

Step 5. Get Out Of It What You Want And Don’t Listen To Anyone Else

A long step, but one worth remembering. Take into account your personal position, your free time, your resource, your likes and dislikes, and focus on that. If you’re short on time and money, maybe just a few models that you paint slowly and a more narrative focus is best for you. If you’ve got more resources and free time, maybe you want to buy up an army and head to battle sooner than later. It’s all up to you, the hobby is big enough and open enough for you to get into it, however you want.

Just remember that your way is the right way, if you’re having fun, that’s all that matters. If the end of your Warhammer 40k journey is painting models, great. If it’s winning every tournament, then go for it. If you’re just there to have a laugh with some mates while bashing some plastic people about, awesome. If you just want to read the books and theorise on the lore, more power to you. If you want to field an entire army of snotlings painting in Hello Kitty colours, brilliant! Also send pics.

It’s up to you. That’s all that matters.

So There You Go

That’s some of the steps we’d recommend you think about when you’re looking at getting into Warhammer 40k. Hopefully if you were thinking of getting back into the hobby, these steps will ease some of the worries you might have. Just remember the golden rule: have fun. And the other golden rule: don’t be a dick to anyone else. Remember those, and you’ll be good.

And of course, once you’ve chosen your army, bought some stuff, and got used to the new rules, why not head down to the Green Man Gaming offices and challenge us? We’ll take you on. And lose, but hey, at least my lovely Chaos Boys will get an outing!