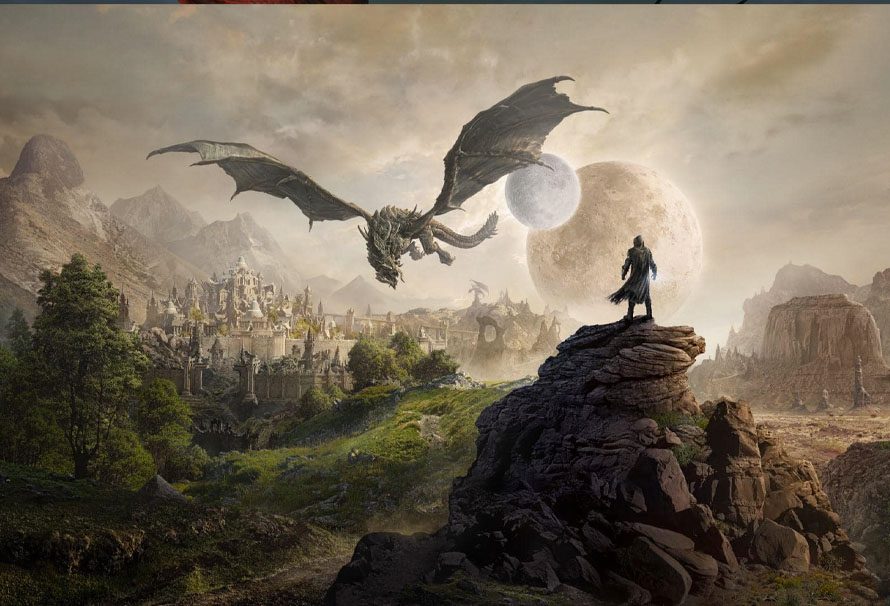 The Elder Scrolls Online is heading to cat-town, Elsweyr is the latest expansion to the long-running MMO and if you pre-purchased you can play it right now.

For twenty five years the Elder Scrolls series has taken us to many different places in Tamriel (and beyond). On the surface the series may appear to be a standard sword ‘n’ sorcery adventure, but there’s plenty going on that show just how weird the universe is.

To celebrate the release of The Elder Scrolls Online: Elsweyr, we’re taking a look back at some of the weirder things that Bethesda have put into their games.

Note: Before we get started, you’ll find scant reference to Sheogorath here. The Colin Hunt of the Elder Scrolls universe is more wacky than weird.

Warp in the West

It’s genuinely hard to overstate how ambitious Daggerfall is. A huge section of Tamriel for you to wander over with innumerable towns and cities to play through.

The plot is equally ambitious. What starts as an investigation into the risen ghost of Daggerfall’s former king becomes a race to find the Totem of Tiber Septim, a device that would activate a colossal construct, the Numidium. The player in Daggerfall must decide which of the seven factions in the game should receive control over the Numidium, furthering their own agenda as well as deciding the fate of the Iliac Bay region.

Except by the time Morrowind came about, it seems something went wrong.

By a strange twist of reality, every single faction in the Iliac Bay region gained their own Numidium, and used it to further their own goals. The Orcs gained their freedom, the Underking regained his heart, Mannimarco the King of Worms ascended to godhood.

There were forty-four states in the Iliac Bay before the Warp in the West. After, there were only four. And Tamriel was never the same again.

CHIM is a small word but capable of creating such ire amongst the denizens of r/teslore.

Known as the secret syllable of reality, CHIM is a concept that once known, allows the knower to have almost unlimited power to reshape reality.

Whispered through books in the series, the concept of CHIM is still an integral part of the Elder Scrolls lore. We don’t have any firm confirmation of what it exactly is, how one uses or gains CHIM, or what its limits are. But some books in-game theorise that, for example, the sudden change in climate in Cyrodil from jungle to temperate was undertaken by Tiber Septim using CHIM.

Described as a revelation of one’s position in the universe and the nature of reality, some fans have theorised that with CHIM comes the realisation that the Elder Scrolls series are just video games. This allows god-like users, such as Vivec, access to the game creation kit. Basically, they mod the game. From within the game.

Ah Battlemages. Good at magic, good at battle. But training a Battlemage is a tricky business. Lots of fireballs going through the air, lots of discovering the more war-like side to magic. Where can you train them up in relative safety?

Maybe you could try somewhere isolated. Or somewhere heavily fortified. Maybe you relocate your Imperial Battlemages to a different dimension so they can’t hurt anyone.

Or maybe all three. Enter the Battlespire, a floating fortress in a pocket dimension that serves as a training and testing ground for Imperial Battlemages.

Of course, even though it’s fairly safe, it’s still in a bit of daedric danger,

A staple of the Elder Scrolls series these days, first appearing in Morrowind he’s been in every instalment afterwards. M’aiq is a jolly fellow, a Khajiit with a direct line to the developers. Often giving cryptic clues or explanations for game systems, he’s weird enough in his own right.

But that’s before you discover M’aiq in Oblivion.

M’aiq’s adventures in Oblivion lead him across the land, always in the search for callipers. Every day he’ll stop and look for callipers, unless he has more than twenty of them already. This means that despite him being hard to find, you can bait M’aiq into coming to you. If you surround yourself with callipers, of course.

Khajiit and the Moons

Khajiit hail from the land of Elsweyr, which is why you’ll expect to see a lot of them in the next expansion for the Elder Scrolls Online. Their land is a mix of jungle and dusty desert, and of course, cats.

There are seventeen different variations of Khajiit, and they vary hugely between forms. Some are just small house-cat sized creatures, some have reversed knees like dinosaurs, and some just look like Tony the Tiger.

How do you get different Khajiit? It’s tied to the movement of the two moons Masser and Secunda. Every phase of these moons has their own associated Khajiit – even a lunar eclipse.

Khajiit all look the same upon birth, but after a few weeks their distinct natures begin to show. Will your child be a Cathay-raht or a Suthay-raht? Well, that depends on the orbs in the sky over Elsweyr at the time of birth.

Hopefully we’ll be seeing a lot more of the Khajiit in Elsweyr, especially some good old Morrowind cats.

The Wood Elves, or Bosmer, are a diminutive species of forest dwelling elf. They have an affinity for nature, ranged weapons, and tend to have slightly squeaky voices. Ah, the comic relief race.

Except you have to remember that they’re all cannibals.

The Bosmer live in utter harmony with their great forests, living on motile cities that move through the woods. They also follow a path called the ‘Green Pact’, living in symbiosis with the Valenwood, their home. As a result they refuse to harm it in any way.

This means no cutting of wood, but more importantly, no eating of any plant matter.

They only eat what they kill, and this applies to battles too. So the next time you refuse to return a ring of healing to a friendly Bosmer, remember that he could be chewing on your corpse in a few minutes.

What everything is made of

The world of the Elder Scrolls is called Nirn. It’s not like our planet, one rules by physics and scientific rules. It floats in the void of Oblivion on a plane called Mundus. This makes it distinct from the other planes of existence, mostly ruled over by various Daedric Princes and Gods.

Whilst the other realms are directly controlled and created by individual god-like creatures, Mundus was created by the eight divines (calm down Nords, Tiber Septim wasn’t a god yet at that point). They weren’t happy with this creation as they were tricked into it by Lorkhan. If you’ve finished Morrowind you’ll be familiar with at least part of him.

Lorkhan was punished for this deception, and his body was ripped apart. Part of it was buried in one of the towers which anchor reality, the volcano of Red Mountain. But the rest was used to form the moons that orbit Nirn. So if ever you look up and think ‘ah, what a nice view’, remember that you’re looking upon the ruined remains of a god.

In addition the stars themselves may be the corpse of another god, Magnus. Or they might be holes from which the other realms of Oblivion shine through. With everything in Tamriel, there’s differences of opinion.

Nirn isn’t like our world. It’s half made of ideas, half doomed god, and all crazy.

The Elder Scrolls Online: Elsweyr is available to buy and play right now. If you’re a Elder Scrolls fan, let us know in the comments if we missed any of your favourite weird lore from the series. Until then, we’re heading to Elsweyr.