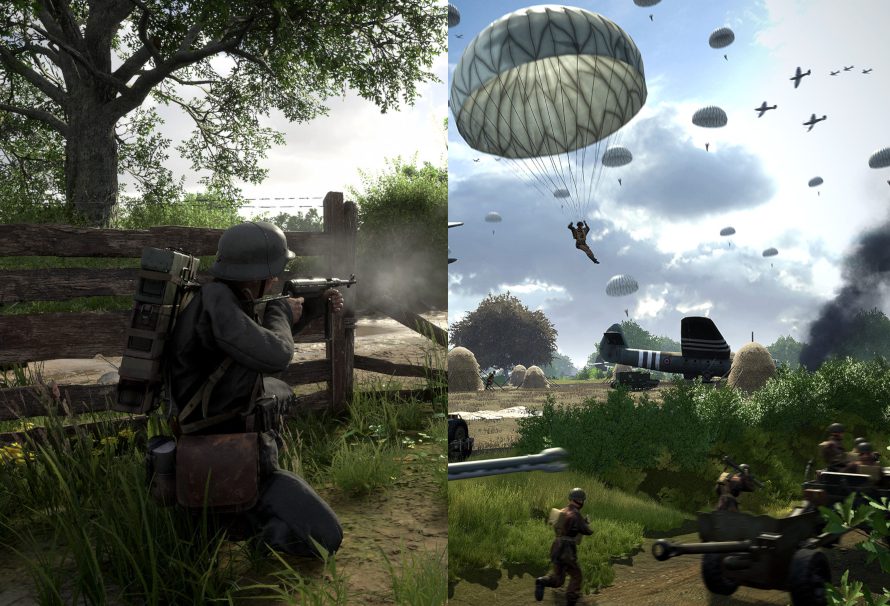 On the surface of it when comparing Hell Let Loose vs Post Scriptum they may seem like they’re offering a very similar experience. Both are World War 2 FPS games that focus on tactical gameplay and working together in order to win. However, when you search a little deeper, both do offer something of their own. We’re going to take a look at both games, highlighting some of the main differences between the two. Hopefully, that will help you decide which is the right game for you.

Both Hell Let Loose and Post Scriptum offer large scale warfare where you will form squads within a team and have to fight for objectives across huge maps. Hell Let Loose features up to 100 players with 7 maps to choose from, whilst Post Scriptum has 80 player servers and 11 maps.

These aren’t your typical run and gun experiences. You’re going to want to take things slower and utilise communication between squads and your squadmates. Having said that, Hell Let Loose definitely plays at a slightly faster pace and you can ‘get away with it’ a little more if you try to run and gun.

Post Scriptum features a prevalent stamina bar, that should you run a lot will leave your aim lacking. In order to refill it, you’ll either need to stop running or drink from your canteen. Managing your stamina plays quite a large role.

Both games feature a diverse number of roles within squads, from standard riflemen, medics, antitank, machine gunner, etc. Each role has access to its own specific weapons and utilities. There are also sniper roles and armoured tank squads you can play as.

Post Scriptum features two main game modes with one having a slight variation of itself offering another way to play.

Offensive – An attack and defend mode when the attacking team must capture objectives in order to progress through the map. Whilst the defending team has to hold them, should they lose an objective the defenders cannot retake it. Should the attackers tickets run out they will lose.

Advance and Secure – In this mode all flags or areas on the map are open to being captured and each side will jostle for control of them and try to capture them all.

Warfare – Each team will start on separate sides of the map and fight for control over randomised objectives trying to push each other back to their own HQ’s. If you lose your HQ you lose the game.

Offensive – Another attack and defend game mode where one team will need to hold objectives and the other will try to take them. Two points will be available to capture at a time meaning you’ll have to split your squads wisely. Should the defending team lose those two points, the attackers will gain extra time and have two new points to attack.

Whether you play Hell Let Loose or Post Scriptum both games offer an amazing immersive experience. But each one excels in an area over the other one.

Post Scriptum has incredible sound design, the explosions in particular from grenades and tank shells sound massive and powerful. Additionally the effects that go along with them look amazing too with big cloudy explosions jetting into the sky around you. The sound of the Stuka as it begins its dive-bombing run is a terrifying experience.

Whereas Hell Let Loose offers superbly detailed environments. Each map in Hell Let Loose has been accurately recreated to represent closely what the real world locations look like. The detail in the buildings, rubble, trenches and more is brilliant.

Even though one is better than the other is some areas, they’re still standout experiences overall.

Hitscan or projectile? Some players will prefer hitscan weapons meaning where you’re aiming is where the bullet will hit with no travel time. Others will prefer lifelike bullet physics where you need to take into account distance to the target and whether you’ll need to lead your shots if the target is moving.
Hell Let Loose currently features a mixed bag where single-action rifles including snipers and all heavy weapons feature projectile-based bullets. However, SMG’s and pistols are hitscan. Full bullet physics is a work in progress.

Whereas Post Scriptum has gone for the more realistic approach implementing bullet physics for all weapons meaning when aiming you’ll need to take into account the distance to the target for bullet drop and whether they’re moving.

In terms of other physics – i.e. ragdoll, both feature some impressive ragdolling effects with lots of gore as a result of any nearby explosion. Expect to see lots of limbs flying about…

When considering Hell Let Loose vs Post Scriptum I think it comes down to a couple of questions. Do you prefer your tactical gameplay to be a bit faster paced or slower? Whilst both games require communication and teamwork, Hell Let Loose feels a little more lenient in that regard. Post Scriptum has a bigger learning curve to it but offers more depth to its mechanics.

If immersion is your thing, would you rather better-looking maps or better sound design? Hell Let Loose features the better map design, whilst Post Scriptum has better overall sound.

Either way, both are excellent games that are only getting better as new features continue to be added to both.