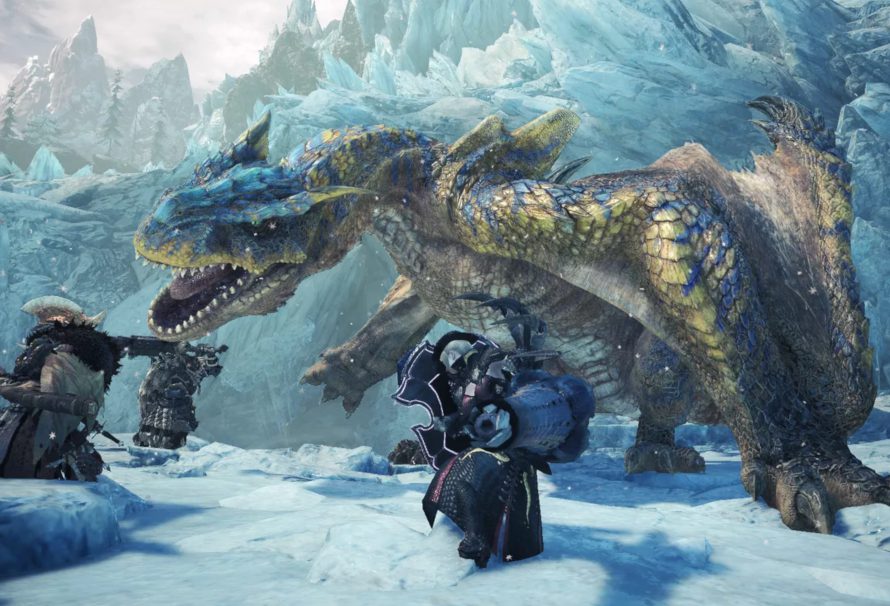 The latest chance to carve up lots of (sort of) innocent dragons, lizard-dogs, and cute bats is here, that’s right, there’s more Monster Hunter. That’s right, with a new expansion comes new things to hunt, and that’s why you need a list of all the Monster Hunter World: Iceborne Monsters.

While some of these are returning from older games, others are variations on current Monster Hunter: World monsters and others are entirely new. The one thing that each of them has in common is that they’re all looking to eat you. Well, some of them are actually just minding their own business and then you bust in and stab them in the head, but others are legitimately destroying the world around them; it’s a mixed bag. Anyway, here is your MHW Iceborne monster list.

This first part of the list of Iceborne monsters has everything up to and including the face of the Iceborne expansion: Velkhana.

Beotodus is a big old ice fish. It swims through the snow and earth and coats itself in an icy armour. It’s the first monster you fight and serves as a warm-up to some of the arctic battles you’ll be taking part in.

Banbaro has the head of a moose and the body of a tyrannosaurus rex. It’s an odd combination, but it basically means that you’ll be running away from it a lot as it tries to swing trees and boulders at you. It can surprise you by flinging these huge objects at you as well, so be on your guard.

Viper Tobi-Kadachi can inflict both poison and paralysis. It’s incredibly fast and can close any distance you put between you in an instant. Make sure you’re prepared to fight it by being immune to those two status effects though and it’ll be much easier.

Nightshade Paolumu this variant monster inflicts sleep by blowing out billowing clouds of sleeping gas. If you can avoid that then the fight isn’t much of an issue, though it does stay airborne a lot, so make sure to use your new clutch claw to keep things even. Or just bring an Insect Glaive.

Coral Pukei-Pukei is a water-spewing chameleon/bird that is, honestly, kind of disgusting. It drains water from the world and spits it out of both its mouth and its tail to cause damage across a huge area. It can do this while drinking too, so head for cover if it dunks its head in a flower.

Barioth is fast, strong, and looks like a sabertooth tiger with wings. On top of this, it can create damaging ice cyclones and leap vast distances. It’s probably the first fight on this list of Monster Hunter World: Iceborne monsters that will really test you.

Nargacuga is a panther bird and is almost entirely black. It’s another fast monster and combines its speed with the ability to fire sharp feathers from its tail to deal damage at range. It’s a tough monster too, with plenty of health to whittle down as you fight it.

Glavenus is a t-rex with a sword for a tail. Also, it can breathe fire. That seems like a lot, doesn’t it? Well, it is. Glavenus is one of the MHW Iceborne monsters that have no issue killing you in one hit if you’ve got the wrong armour on. Keep on the move and try and cut its tail off to make the fight a bit easier.

Tigrex is a tiger-striped beast with incredible power. It fights mostly using its brute force, but can also fling rubble at you if you get too far away. It’s also relentless, many of its attacks simply has it charging at you multiple times before performing a spin attack.

Brachydios is a boxing dinosaur that secretes an explosive substance. It coats its fists and head with this too cause highly-damaging blasts that can take you out in a single blow. It’s fast and it moves around unpredictably too.

Shrieking Legiana is an ice-coated version of the Legiana. It flies at incredible speed and can leave trails of razor-sharp ice behind it or even fling them forwards. It uses its tail to fling hunters flying and deal damage.

Fulgur Anjanath is a lightning variant of the normal Anjanath. It spits electrified mucus at those who are far away and kicks or bites those who are close. It also spends a lot of time being angry, which can make it tough to deal with.

Acidic Glavenus is like the normal Glavenus but with no fire, instead, it coats itself in a type of acid that reduces the defence of those affected by it. It also tends to attack slightly faster and with more jabs than sweeps.

Ebony Odogaron is an angry dog than has claws, speed, and the ability to spit out dragon-damage inflicting blasts. It’s a tough one to fight if you’re not prepared to deal with bleeding or you’re weak to dragon attacks, but it’s also weak to every other element, so you should be okay.

Velkhana is the face of the new monsters, and for good reason. This elder dragon freezes the air around it to form armour, can change the landscape with its breath, and can even cause chunks of ice to form above you.

These are all the beasts you’ll be fighting after Velkhana, including some of the ones you can only fight once you’ve seen the credits.

Seething Bazelgeuse is an angrier version of the bombardier dragon we all hate from the OG MHW. Its explosive scales have a larger range and can even swell up to devastate huge areas of the map. Also, it breathes fire.

Blackveil Vall Hazak is a more noxious version of the elder dragon Vall Hazak. It’s coated in toxic spores that it uses to drain the life from anything around it. It’s probably the most obvious ecological threat on this list of Monster Hunter World: Iceborne monsters.

Namielle is a fish-dragon and can summon torrents of water. Not only that, but it takes advantage of the soaked terrain to electrically charge its wings and shock entire areas with ease. It’s also visually stunning and makes for some cool armour.

Savage Deviljho is a lot like the normal Deviljho but really angry. Like, so angry. It breathes damaging smoke and can pick up other monsters to use as a weapon. You’ve not experienced Monster Hunter until you’ve had a Savage Deviljho through an Ebony Odogaron at you.

Ruiner Nergigante is a spikier version of the already very spiky dragon. It’s angrier, fires off spines when it attacks, and does even more damage. It’s also on the hunt for other elder dragons, so expect it to turn up when it’s not helpful.

Shara Ishvalda is the final boss of the Iceborne expansion and is a mysterious dragon that can move through the earth. It makes for an excellent finale and we won’t say anymore because it would be spoiling things.

Zinogre is an electrically-charged doggo that can send out balls of lightning to deal damage to you.

Yian Garuga is a beaked wyvern that is covered in hard black scales. It’s also got a very short temper and a lot of power. Be careful when facing off against this terrifying foe.

Brute Tigrex, is Tigrex, but even hencher. It’s also got a much darker colour scheme and only appears if you’re an exceptional hunter.

Gold Rathian. As above but for Rathians and gold. Exceptionally poisonous, so bring antidotes.

Rajang is a very angry monkey-type beast. It flings around you, other stuff, and whatever it can get its hands on. It also goes Super Saiyan.

Now you’re ready to take on the new challenges of Monster Hunter: World Iceborne. Looking for some fellow hunters to take on the challenge? Drop by the Green Man Gaming Community Site and find out what other gamers are up to.