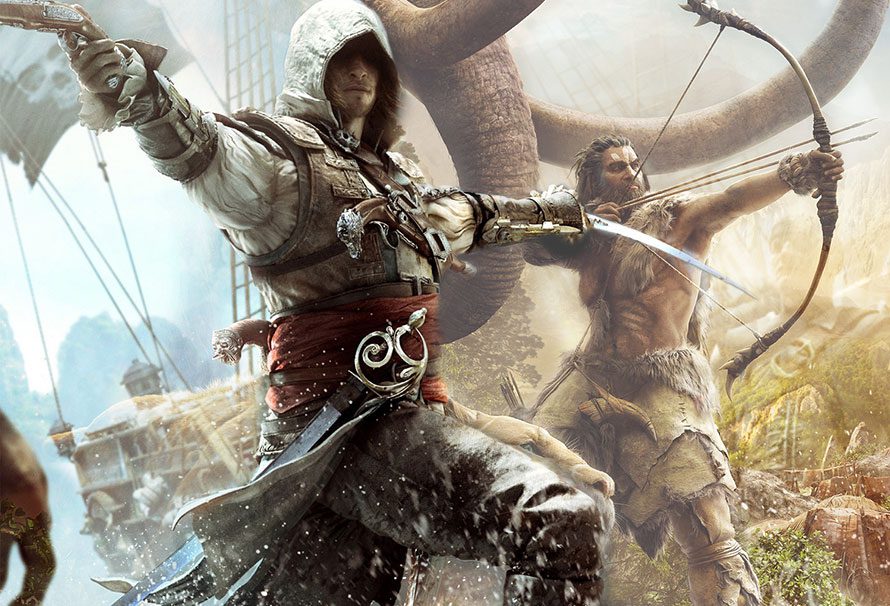 With the release of Tom Clancy’s Ghost Recon Wildlands nearing we thought it would be a great idea for some of the Green Man Gaming team to talk about their favourite Ubisoft open world. Either love them or hate them, these are the ones we truly love.

A lot of open world games these days either focus on present day or the future. True, there is a lot to play with when it comes guns and technology. What I really love though is when a game goes back to basics and that’s where FarCry: Primal comes in.

FarCry Primal has the classic Ubisoft open world traits such as outposts, towers and side quests which is great. The theme however is the biggest selling point as the whole world is enriched with the stone age setting, the lush greens and outside environments make Farcry: Primal very pretty to look at.

There are no guns, just spears, bows, arrows and ferocious beasts that will do your bidding! Ubisoft have also replaced vehicles with lion, tigers and bears (oh my!). I don’t know what it is but I find launching a spear at an enemy far more satisfying that pummelling full of bullets, even though i always prefer bringing a gun to a sword fight.

As someone who grew up watching 80s and 90s sci-fi action movies – both the big-name ones and the straight-to-video B movies – Far Cry 3: Blood Dragon feels like a game made especially for me. It’s a parody, but a very affectionate one; the story, dialogue, weapons, visual style, sound effects, music… it’s all clearly made with an absolute love for the movies that inspired it. In terms of open world features, I love how in Blood Dragon using vehicles is a convenience but not essential. As Rex “Power” Colt you are a cyborg superhuman with unlimited sprint and no fall damage, so if you get your car blown up then you can still easily reach your destination with a pleasant jog rather than a long slog. Along the way you are bound to have some fun when you run into an Omega Squad patrol or a Cyber Panther, and it’s great when one of the titular Blood Dragons gets involved and starts blasting everything with energy beams.

By the time Black Flag came out, the shine had begun to rub off the Assassin’s Creed games. Revelations had introduced a strange tower defence minigame which didn’t add anything interesting to the formula, and Assassin’s Creed III had leapt into a haycart of mixed reviews. Expectations were low when it was announced that the next Assassin’s Creed game would be a pirate adventure.

Low, but wrong as it turned out.

Black Flag is an amazing game, it contains not only full cities and the same Assassin’s Creed formula perfected in Brotherhood, but a full fledged pirate simulation game which has yet to be bettered. Edward Kenway is no Connor, he’s a rogue in the true sense of the word, caring nothing at all for the Templars and their war against the Assassins but rather wanting fame, riches, loot, and a big ship. There is simply no feeling better in video games than sailing Kenway’s ship, the Jackdaw, through the wide open seas of the Caribbean with the moon gazing down upon you, waves crashing against your ship, and the throaty sound of sea shanties echoing into the night. The world is beautiful, it’s truly open, and it captures that sense of pirate-ness better than any other game. If you haven’t checked it out because it’s an Assassin’s Creed game, then check it out just for being the best damn pirate game there is.

Also you get to pet cows and dogs in it so that’s a plus too.

So there you have it, feel free to tell us what your favourite (or even least favourite) Ubisoft open worlds are.

Every Far Cry Ranked From Worst to Best (Updated)