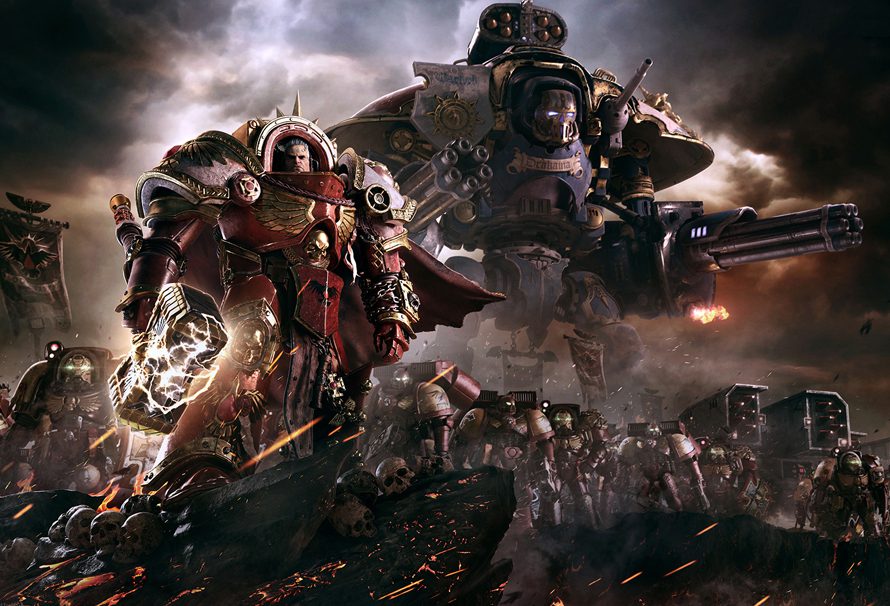 We here at Green Man Gaming love RTS games, we also love Warhammer. It’s safe to say then that Dawn Of War is right up our street, and with Dawn Of War III fast approaching we asked Alex M, Milo and Olly on what race they like to play as in Dawn Of War and why you should play as them.

OLLY : “Orkses is never defeated in battle. If we win we win, if we die we die fighting so it don’t count. If we runs for it we don’t die neither, cos we can come back for annuver go, see!”

In the grimdark future of Warhammer 40K, there is only death. Or so the saying goes. Most races either serve evil incarnate or are desperately trying to stave off the slow and inevitable ruin of their species.

Enter the Orks. Technically a fungus, and therefore always in ample supply no matter the state of the galaxy, these hulking football hooligans of a race are the only ones perfectly happy in a situation so dire. Orks are bred for fighting. Literally. They were created to be foot-soldiers and inexhaustible in number. This makes them perfect enemies for games, but there is some great joys in taking control of the green horde yourself, and not just because they are the only species who are having a grand ol’ time. Seriously, they are the only creatures in 40K who actually LIKE it when their ships get boarded by chaos demons.

In Dawn of War III you will control the Bad Moons clan, the richest of the Ork clans. This is because their teeth grow faster than any other Orks, and Ork ‘teef’ are their currency! Meaning you don’t only get your swarms of green-skins, who on their own match Space Marines in terms of size and toughness and melee prowess, but also all the cool toys. Ork technology works, simply because the Orks believe it to do so. I’m not kidding. They throw hunks of junk together and because they think it works, it works. They think red paint makes vehicles ‘go fasta’, they go faster. Such a technological style means Ork vehicles look insane, but awesome.

And if you’re still not convinced, check out the Ork’s heaviest units: Mega-Nobz and Warbosses. Imagine the Hulk, encased in huge plates of armour, armed to the teef with flamethrowers (burnas), huge claws, and axes (choppas). Much like the Hulk, the only way to beat an Ork is to leave the field of battle as fast as possible.

MILO: “They shall come, expecting the obvious, the simple, the artless. They shall stab at the shadows with confused minds and troubled hearts. Meanwhile, we shall appear unseen from ten directions, and from every one strike a fatal blow.”

The Eldar are the last survivors of their ancient civilization. Fallen rulers of the galaxy, they remain an elusive yet fearsome power. They cling to survival by a thread, fighting the horrors of the galaxy with ritualised discipline and supreme skill.

A highly technologically advanced race, their shuriken and prism beam weapons strike with lethal precision. Where the Space Marines are a hammer, the Eldar are a dagger, striking their targets with finesse. In Dawn of War, you will come across some of their most recognisable warriors. Howling Banshees will descend upon their foes with fleet of foot and begin dismantling almost any unit in melee combat. Your farseers – powerful psychics – will bring eldritch fury upon your enemies and your agile Fire Prisms will deliver devastating superheated explosions to those on the wrong side.

The Eldar are a powerful, elegant force. They wield fearsome weapons, yet they are an undeniable force of glass cannons. This is a versatile race with powerful ranged and melee units, but all Eldar units are fragile compared to some of their more armoured Space Marine or Chaos counterparts. In previous Dawn of War games, the Eldar have worked for somebody who is willing to manage their force just a little more closely, and strategise with a touch more craft than the blunt instruments that are other races. However, if you play your cards right with these ancient warriors, you will dance around your foes like a lethal leaf on the wind and the lesser creatures of the galaxy will begin to comprehend your speed and fury.

ALEX M: ‘Beware the alien, the heretic, and the mutant.’

One of the joys of 40k is that you can basically make up your own faction. Maybe there’s a previously undiscovered Eldar Craftworld, maybe you’ve written a backstory for a new Tyranid Hive, or maybe there’s a lost Space Marine chapter with a mysterious history.

Relic chose to do the last one for the Dawn of War series, creating a Space Marine chapter called the Blood Ravens whose chapter base is a fleet of spaceships and who don’t know what chapter spawned them. What’s unusual about this though, unlike some fan creations, is that the Blood Ravens work. They’re just cool enough, they’re not too overpowered, and their mystery is just mysterious enough.

Also they look kinda like The Blood Angels and that’s always good.

Over the course of the Dawn of War games you get to know the Blood Ravens pretty well, Gabriel Angelos, Tarkus, Cyrus, Thaddeus, and of course good old Davian Thule. You take them from being basically nobodies, to helping them weather a Tyranid invasion, a chapter master who’s fallen to chaos, and several big ol’ wars.

You get to do all that whilst wielding a massive hammer and being followed by a pack of terminators. Space Marines are awesome and the Blood Ravens in the Dawn of War games are doubly so, because you get to *be* them. They’re back in Dawn of War III, and we can only advise that you try them out. Remember; tread softly, and carry a big bolter.

It fell to brave souls like Horus Lupercal, Lorgar, Fulgrim, and Angron to discover and spread this truth. Primarchs who were the Emperor’s sons turned against him and turned their service and that of their Space Marine chapters to a greater power, The Ruinous Powers; Chaos.

Now in the 41st Millennium, the war rages on and the Chaos Marines are a plague on the Imperium, quite literally in the case of Nurgle’s devotees. Using the training and abilities implanted in them via the gene-seed and astartes programmes, the Chaos Marines combine all this with the power granted them via their twisted worship of Chaos to subvert and destroy the Imperium of Man.

Chaos Marines in Dawn of War games tend to play fairly similarly to Space Marines, but at their heart is an unleashing, a savage joy that you are tearing down the rigid and stagnant Space Marines, that you’re the anathema to ‘good’ and ‘right’. Basically, they’re the choice of the aesthete and of the berzerker all at once.

Though they have yet to make an appearance in Dawn of War III, we who worship Chaos United live in hope that our Ruinous Powers will show their face at some point in this next instalment.