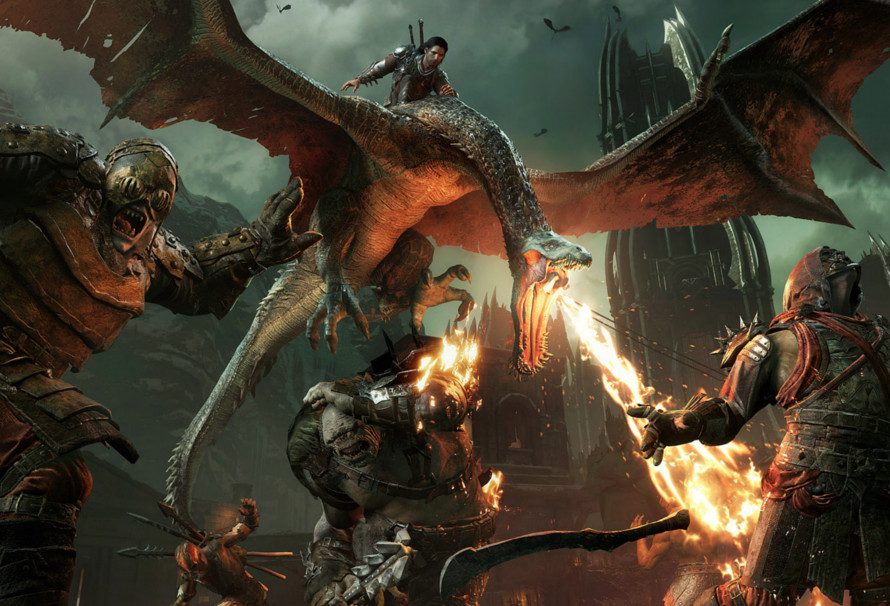 Deep in the craters of Middle-earth, where the coarse, burnt black roads meet the undesirable mountain troughs. Where the ashes settle onto hidden passages and withered trees bow over forgotten paths. All hot, searing with the burning gaze from the fiery eye and the unburdened heat of Mount Doom.

That’s where they lurk, in the rubble of dust, the creatures of Mordor.

A Drake is a smaller dragon, but by no means underestimate their powerful force in battle. Talion will be able to control and ride the Drake in his upcoming battle against Sauron’s army, utilising its deadly fiery breath in combat and shielding enemy attacks with rough, armoured scales.

Weakness: Must be on a low health to be controlled by Talion

Strength: Breathes two types of fire, a stream of fire or a large fireball that explodes enemies on impact

The ravenous teeth of the Caragor rips straight through its enemies and devours its prey. Traveling in large packs and prowling the grey fields of Mordor, keep your distance. Only tameable through Talion’s wraith abilities, where you will be able to ride into battle and fight alongside you. If you come across a hostile Caragor, it’s ferocious attacks must be dodged. Caragors prove advantageous in battle once controlled, fighting alongside Talion and picking off his enemies one by one.

Strength: Combat-leap in to battle

The slime of the region, their overwhelming numbers add to their unpredictable and conniving nature. Swarms of the creatures will not hesitate to scratch and bite their enemies, spitting poison to injure its victims. Talion can use his wraith abilities, Wraith Burn, to control large hordes of Ghûl and use them to slowly chip away at enemies health.

A gigantic creature that resides as far a the Blue Mountains and dominates the region of Mordor, unleashing fear to enemies through it’s large size and overwhelming strength. Graugs have troll like features and abilities, with large stomping feet, thick limbs and teeth that shred its enemies clean of the bone.

Strength: Massive claws that perform rain down attacks on prey

Weakness: Unarmoured ankles that can be sliced to take down their enormous body

Caragaths are stealthy beasts, that roam the vast grassy expanses, travelling similarly to the Caragors, but they are smaller, cunning and more agile in their attacks. They can be lured by bait, captured in cages and will be non-hostile to Uruks, well, before the fight begins anyway.

Strength: Talion is able to subdue this beast and perform stealthy attacks on enemies

Protective small little insect creatures, that hum around the hives strewn across Mordor. They won’t attack if they’re unprovoked, but if you disturb their nests, the creatures will swarm towards you and create a stinging blaze until you drop to your knees.

Strength: Creates a large swarming frenzy, that takes down even the biggest enemy

Weakness: Will remain at bay if their nest is unscathed

Shadow of War is coming to PC and consoles 10th October 2017. What are you looking forward to in the new game?