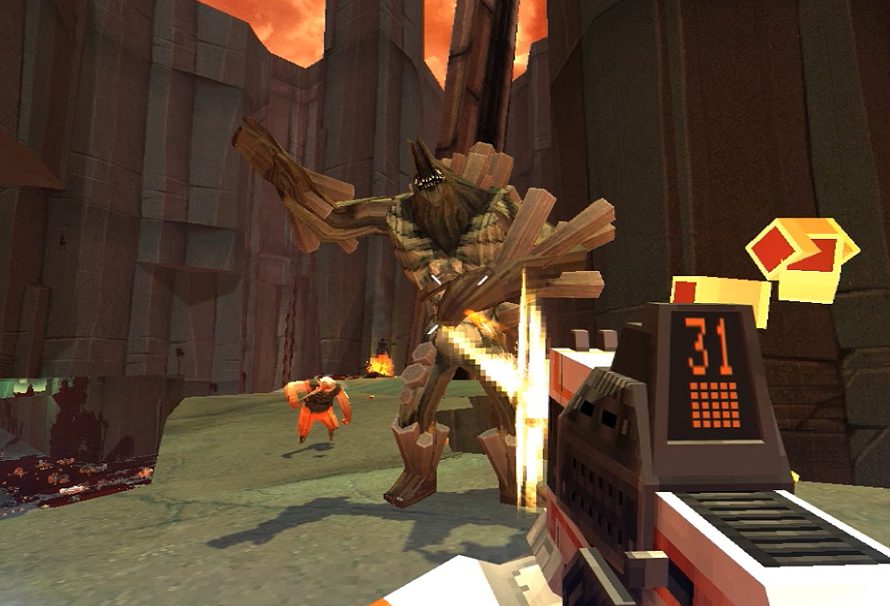 STRAFE is out today! The new game from Pixel Titans and Devolver Digital promises face melting speed, bucket loads of blood and gore and endless changing levels. Just looking at STRAFE you can tell that this game got its inspiration from some classic old school shooters. So we thought we would list our top old school FPS games, here we go!

What can only be described as the forefather and creator of the FPS genre. Wolfenstein 3D was the first ever 3D first person shooting game and players jumped into the army boots of B.J. Blazkowicz as he tries to escape from the the notorious castle Wolfenstein during the second world war. This game was packed full of enemies and fast paced FPS gameplay which was hugely popular all the way back in 1992, there were also Nazi Zombies and a Mecha-Hitler.

After creating the popular Wolfenstein, Id Software then went on to create DOOM. Possibly heralded as one of the best old school FPS games still to this day. DOOM took players on a journey to Mars then to Hell. Battling the demons of Hell never felt so epic. Especially when wielding the infamous BFG 9000, one of the deadliest weapons ever created in games.

The first Quake game was heralded as the spiritual successor of DOOM. For us though, Quake 2 was the game that made the franchise! With the introduction of the cyborg race known as The Strogg and the Rail Gun. This game rose the bar for both the Quake franchise and for first person shooters as a whole.

Duke Nukem 3D brought Jet Packs, Freeze Rays and Shrink Guns to the FPS genre. True, Duke Nukem himself was a egotistical misogynist who would spew out high levels of smut, but the gameplay was unlike anything anyone had seen in an FPS game. Also the Pig Cops had LARD on their backs instead of LAPD which I still think is hilarious to this day.

Unreal Tournament gave many gamers their first ever taste of arena based FPS combat. This was one of the only multiplayer focussed FPS shooters out on the market (except maybe Quake 3 which came out the same month) and took competitive first person shooters to the next level. With varying game modes and an epic arsenal of weaponry, Unreal Tournament paved the way for multiplayer arcade style shooters.

The aim of Devil Daggers is simple, survive as long as you can! This FPS game only came out last year, and is a great hark back to old school FPS games. Players are only armed with one weapon and are thrown into what can be only described as a pit of chaos. The weapon you are given has 2 fire functions and can also be used to jump as well as kill things. The ultimate survival game for any FPS fan.

So that’s it for our best old school FPS games. Did we miss any? Let us know in the comments below!

STRAFE is available now on the Green Man Gaming store.