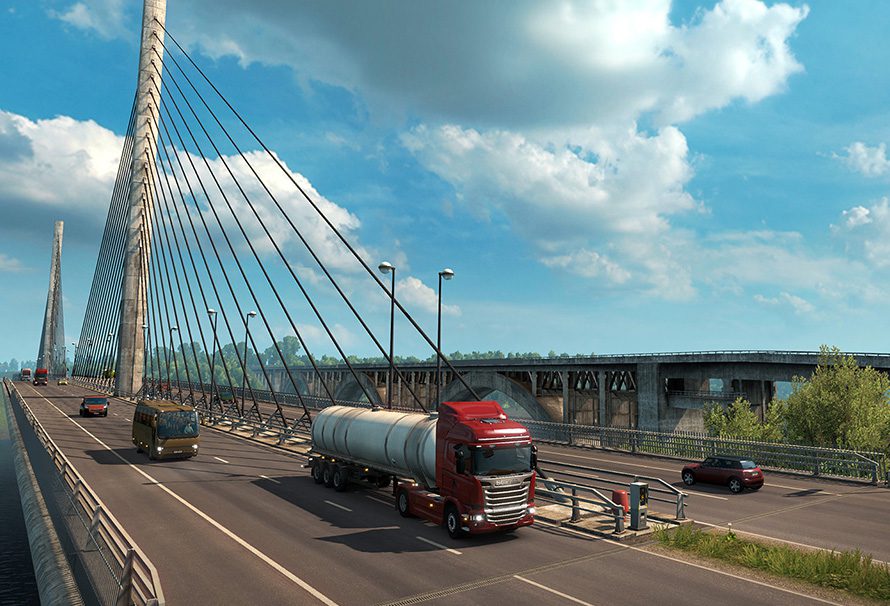 The world’s a bit of a mess right now.

There’s just so much right now, so much of everything. You can’t turn on the tv without being assaulted by the muchness. The world has gone insane and there’s no respite, it follows you everywhere reminding you that like I said before, the world is in a bit of a state right now.

Except maybe, for the bits involving Euro Truck Simulator 2.

Alright So What Is It?

It’s the sequel to Euro Truck Simulator, you dunce.

It’s a game where you play a haunted truck, cursed by the dark lord Scania to haul items across Europe for eternity, or at least until you earn enough money to coalesce yourself back into human form and retire.

Maybe that’s not the entire story, I have to be honest I didn’t read the first few Euro Truck Simulator novels, but anyway you’re definitely in charge of a lorry, and you scoot about delivering things.

It’s a simulator, you drive a truck, it’s set in Europe.

OK Why Should I Care?

Why Is It Great Though?

Imagine the scene. You’ve had a rough day, your boss is off sick so all the work’s fallen to you, the roads were jam-packed with cars and it’s taken you longer than ever to get home.

You’ve made yourself tea and you’re ready to play a game, but what? Do you jump in and shoot a load of things? Nah you might get stressed. Do you commit yourself to a lengthy RPG session? Nah too much like work. Do you play League of Legends? Nah you’ve no desire to be insulted by children.

Then you have it, why not start up Euro Truck Simulator 2 and have the most wonderful and relaxing time in the world.

Yeah it’s incredibly relaxing. OK parking isn’t and you might need a little while to get your head around the controls.

But once you do, wow, you’re in for a good time. One of the amazing things it does is you can tune your in-game radio to local radio stations, so you’re there, cruising along at the speed limit in the Netherlands, listening to the burbles of local radio, not understanding anything but that doesn’t matter, you’re there, you feel like you’re actually there. You might need to add them as streams, or as a mod, but you can do it and it adds so much to the game.

It’s like having a holiday without leaving your house.

Alright, That Sounds OK. But Is That All There Is To It?

There’s a proper game loop too, you do contracts to earn money by delivering cargo, then you spend your money on new lorries, new routes, the ability to deliver to new cities. Eventually you might even own your own little empire, employing many other lorry drivers. BE EDDIE STOBART basically, and who doesn’t want to be Eddie Stobart?

Shut up everyone who doesn’t want to be Eddie Stobart.

So Why Should I Check It Out Now?

Because it only gets better with time, because the world is C H A O S and you need a refuge now more than ever, because there’s loads of DLC and expansions for it, because well…because it’s brilliant!

*sigh* OK Go On, Do The Advert Then

Did you know you can get Euro Truck Simulator 2 at an amazing price on Green Man Gaming Dot Com? It’s true! Just check it out in our sale, it’s right here for an brilliant price right now!