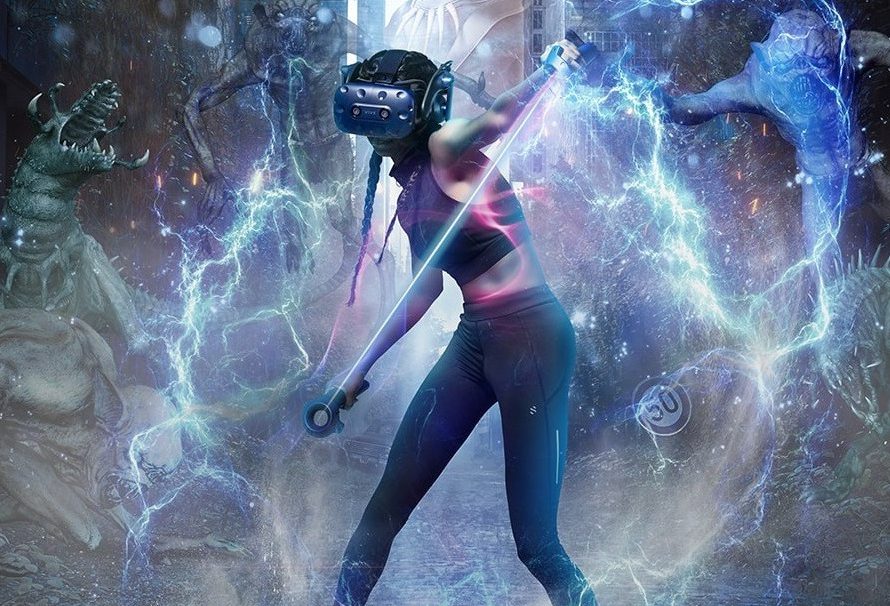 Ah VR, what a wonderful new horizon. If gaming is about escapism, then VR is about helping you truly live another life. The chance to explore new worlds, and have them be so realistic you could touch them, is something that only really exists when you’ve got a VR headset on, and maybe a cat trying to get your attention and scaring your half to death. If you’ve just picked up a headset, then you’ll need to know all about this list of best VR games for PC.

You may well have already played SUPERHOT on console or on PC normally, but I promise you it’s not the same game in VR. Well, I mean, it is the same game, but in VR it’s elevated to an entirely new realm. Punching a giant orange humanoid is intensely satisfying, but so is cutting a bullet as it races towards, throwing the knife at your attacker, and then yeeting a plate at his friend just to assert your dominance. Just get it, join the cult.

This is by far-and-away the smallest game on this list. Made by just the one person, VR Dungeon Knight is a dungeon crawler with a real emphasis on allowing for multiple playstyles. It’s still in Early Access, but that just means it’s always getting updated with new classes, weapons, and playstyles. It’s a horrifically overlooked gem of a game, but hopefully, we can all change that together, because it really is one of the best VR games on PC.

Pistol Whip dares to ask the question “what if John Wick was turned into a rhythm game?” and what it results in is one of the best VR games on PC, and one of the best rhythm games in a long time. Granted, Beat Saber is excellent too (and we’ll get to that), but Pistol Whip is just so intensely dirty in its beats. Every track warps the world around you, and you get extra points for shooting in time with the music. It’s just an incredibly satisfying experience and one that you’d be a fool to miss out on.

See, told you we’d get to it. Beat Saber is probably one of the games that could be considered VR’s killer app. It’s an astounding display of music meets lightsabers, and it’s the kind of thing that can only work in VR too. It hits a similar part of the brain to Guitar Hero, especially as you progress through the difficulty levels and have to try and deflect an unending stream of boxes coming at your face. Just buy the damn game.

While everyone has heard of Beat Saber, far fewer people have heard of Asgard’s Wrath. The word you’ll see bandied about whenever someone talks about Asgard’s Wrath is ambitious. It’s ambitious in its scale, its systems, and its immersion. There’s nothing that comes close to it when it comes to being the whole package. If you imagine it to be like Skyrim in VR, but made especially for VR, then you should immediately understand why people like it so much, and why you should hurry up and join them.

Until You Fall is a roguelike melee game where you have to hack and slash your way through denizens of a corrupted planet. The thing that makes it truly special is the combat, while swords in VR can often feel good, the actual combat can sometimes be rather basic. Until You Fall has you parrying strikes, dodging, and using special abilities with ease. It can be horrifically difficult, but every single moment will have you in awe of your own excellence just before throwing a new boss at you and reminding you where you belong.

This game is free as long as you own the Oculus controllers. Free. You’re an agent tasked with cleaning up a robot uprising. It’s all very tongue in cheek though, so don’t expect it to be a horrifying experience. Robo Recall allows you to grab enemies and then throw them at each other, use them as shields, or just tear them about bare-handed. It’s all wonderfully tactical and the arcade-style missions allow for nigh infinite replayability too.

Another roguelike you absolutely must own. Instead of melee combat though, In Death is all about archery baby. You have to shoot your way through purgatory and into other realms, each of the enemies you fight can easily kill you, so you have to be very careful if you want to survive. The movement is really cool too, you can either throw a shard which allows you to teleport, or shoot an arrow if you want to go further. There’s something wonderful about only using one tool in a game, and In Death does it very well.

Stealth is weird in VR, and also much harder than in a normal game. This is largely because of the viewpoint, you are your camera, so looking around a corner automatically exposes you. Budget Cuts, and Budget Cuts 2, laugh in the face of this by allowing you to open up holes in space/time and then letting you peer through them. You also get a really cool bow in the second one, which is why its here instead of the original game.

Physics-driven VR experiences can often feel like little more than tech demos. It’s annoying because they’re usually the most exciting thing about VR. Thankfully, Boneworks takes all of those little tech demos and rolls them into one incredible interactive world. You can punch enemies to death, hold them at arm’s length, yeet bricks at things, turn handles. Basically, you fully immerse yourself in the world, and it’s one hell of a game as a result.

Have your own favourite we should’ve included? Comment below or head over to the Green Man Gaming Community Site to join the conversation and see what other gamers have to say.