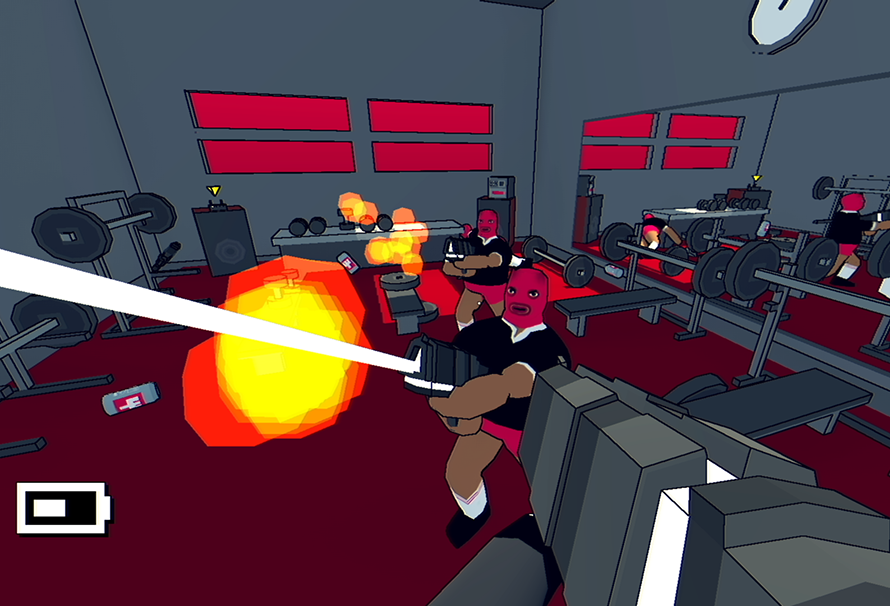 You had been warned not to dabble in the occult, not to trifle with ancient knowledge that you could not possibly hope to understand. Yet you opened Pandora’s box, and you did not like what you found inside.

Now something is pursuing you, terrorising you – Something that isn’t bound to the rules of our reality. Ghosts? Some sort of demon? You wish you knew, although part of you is also glad you don’t. What you do know is that you have to finish what you started – and fast.

Terrified and desperate, the only thing you can think of is to seek the assistance of the old woman who first told you of the ritual. She is the only one who can help you end this nightmare.

High Hell is a neon-soaked, arcade-action first-person shooter from Terri Vellmann (Heavy Bullets) and Doseone (Enter the Gungeon, Gang Beasts). Descend upon the criminal underground with the most blessed of shotguns and bring lethal salvation to those that have fallen from the light. Righteous fury and fancy footwork are crucial to survive an escalating, absurd series of outlandish missions. Pop brainwashed chimps, deface corporate effigies, and dismantle the business dealings of the unrepentant cartel in a vibrant remix of the classic first-person shooter.

Unleash pump action fury and fancy footwork in a quick shot first-person shooter with a twist of neon and the absurd.

Bring down the disciples of evil as you destroy and deface their business operations in over 20 bizarrely satisfying missions. Save sacrificial goats, raze drug labs, and clash against an eccentric collection of bosses.

Choose your plan of attack by either slinking around to find a tactically advantageous position or just kick down the door and murder every son of a bitch in the room. Then take a quiet moment for yourself and burn stacks of cash to add financial insult to fatal injury.

In Sudden Strike 4: Road to Dunkirk, relive battles leading up to one of the world’s most daring military rescue missions.

Following the invasion of France in May 1940, the British Expeditionary Force and parts of the French Army had retreated to Dunkirk and awaited evacuation, while German forces had been closing in to crush them.

Sudden Strike 4: Road to Dunkirk features two new mini-campaigns with four new singleplayer missions based on the events surrounding the famous rescue of Allied soldiers in the eponymous French coastal town of Dunkirk during “Operation Dynamo”.
In the German campaign, you must successfully break through the valiant French defenses in the Battle of Lille, capture the town of Dunkirk and move on to destroy a British battleship. In the Allied campaign, you will launch the British counter-offensive during the Battle of Ypres-Comines and consequently evacuate as many soldiers as possible during “Operation Dynamo”.
Two new Allied doctrine commanders to choose from: French war hero Charles de Gaulle and British Expeditionary Force division commander Harold Alexander complete your strategic options in tackling each mission.
Sudden Strike 4: Road to Dunkirk introduces over 10 all-new units to the game, including the German SIG 33 Bison artillery, the French Char B1 heavy tank, the British A10 Cruiser Mk. II medium tank and destroyer HMS Ivanhoe.

Help Fjong and his friends to reach the sky.. by Eating Candy!

In Fjong you play as one of three small birdlike creatures.
They dream of flying, but unfortunately their wings are to tiny.
But in the land of the Fjong there is a special candy you can eat that blow you up like a balloon, making you lift from the ground and fly up to the sky.

This is the dream of the Fjong.

Fjong is a physics based game where you jump around each stage to get to a bucket of candy.
The stages starts as basic jumping challenges when you control the main blue Fjong but evolves to a more challenging physics puzzle when you unlock the other characters.

Slip into the prestigious jersey of the 2017 British and Irish Lions. 35 players, including Owen Farrell, Jonathan Sexton and Leigh Halfpenny, available in “Quick Match,” “Online Match” and “My Squad” modes.

Live the intensity of the greatest matches with RUGBY 18, the most complete rugby game to date.

Jump into the roles of the official players from the most prestigious teams and championships of the 2017-2018 season: Aviva Premiership Rugby, PRO14, All Blacks, England, Springboks, Wallabies… Master all the game phases using intuitive controls and innovative gameplay that faithfully reproduces each situation of a rugby game. On attack or defence, teammates take their positions and move to develop the game depending on your decisions.

Lead your favourite club to the top in Career mode, play full seasons in League mode, and re-write history in the Match of the Week. Build up your dream team in My Squad mode by recruiting your favourite players from 2000+ rugbymen. Challenge your friends and players around the world in one-on-one matches, online or on the same screen.