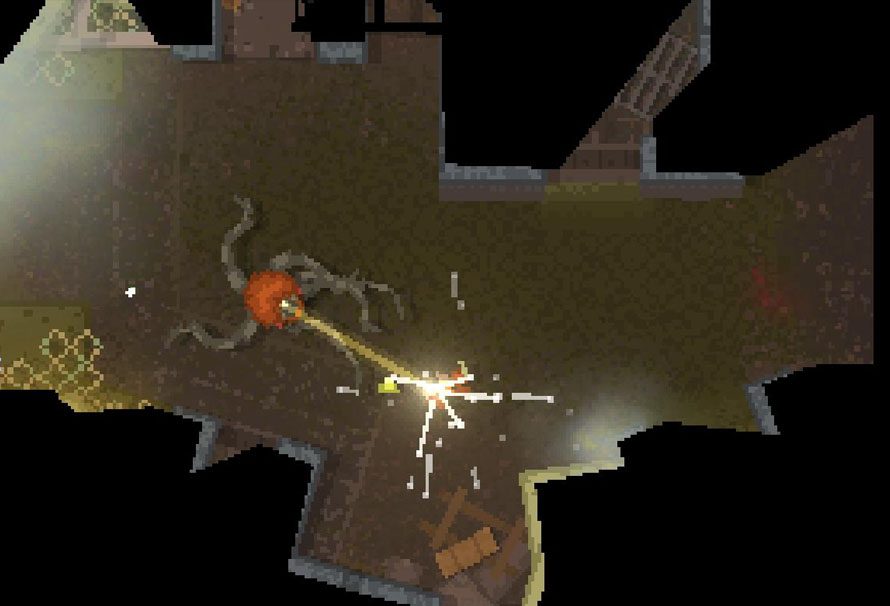 Teleglitch is a roguelike game about shooting lots of things, crafting weapons, and trying to get through levels without dying. On the face of it, Teleglitch sounds like a lot of things.

True it’s a top down shooter, true it’s a roguelike, but it’s got a feel, a difficulty, and an aesthetic to it that’s like nothing else out there. Picture the scene; you’re alone in a science facility, your colleagues are coming at you – reanimated by a rogue AI, and down a corridor a black void crackles at you – humming with intense evil.

That’s Teleglitch. It’s fear and dread and the unknown all channelled together into one glorious terrifying blaster. You’re always on the edge of having no ammo, of having to cobble together explosives from tin cans, from running down the wrong corridor and having no way out other than to step into the horrible blackness that looms out of nothing and fills the air with a deep unsettling thunder. You’re on your own and all you have is your wits, a gun that’s almost empty, and a drive to survive. Get moving, get shooting, and get out.

It’s every roguelike shooter, every science-gone-wrong horror story, every log-filled-what-happened-here all rolled into one. It’s damned hard, and it’s got a damned good aesthetic.

And what an aesthetic, it feels like a grainy found footage film mixed with System Shock 2, it’s got that horror feel just perfect and even though it’s top-down you can feel the griminess of the corridors and feel the horror that’s unfolded in their maze-like depths. You know something bad has happened, and that you were part of it.  The story unfolds as you work your way through the levels, through notes and logs left by your now-dead colleagues, and it fleshes out a tale of intense horror fueled by corporate greed.

Teleglitch is available now, and you should play it because if you don’t, you’re a coward.

I think You’re Supposed To Die A Lot In Limbo

Why You Should Play…Fahrenheit Indigo Prophecy Remastered

Why You Should Play...Homeworld Remastered Collection