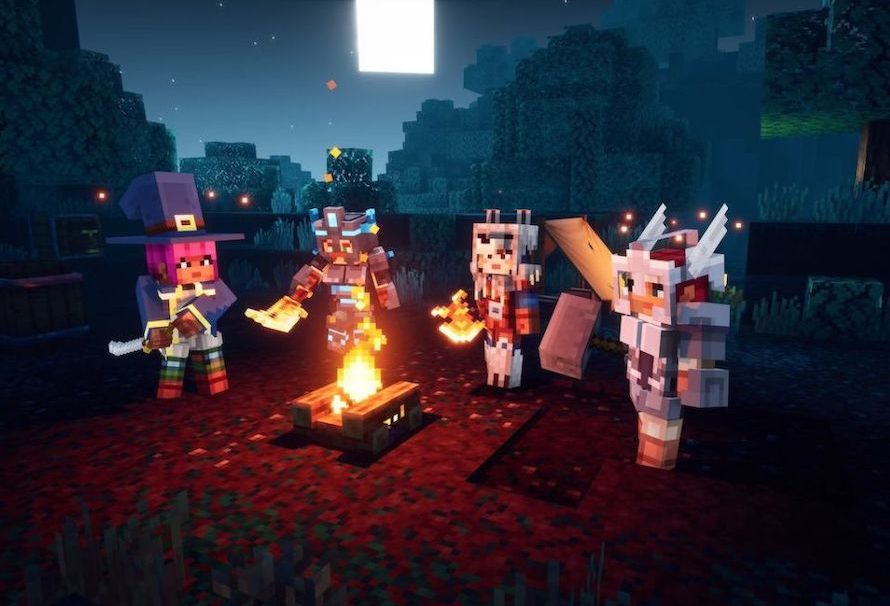 Even though Minecraft Dungeons might seem like a fairly straightforward hack and slash effort on the surface, there are a number of secret levels, nooks and crannies that all help to provide the game with much more depth than one might initially assume. With that in mind then, we’ll be looking at Minecraft Dungeons secret levels and other hidden areas to help you get the most out of Mojang’s monster-bopping Minecraft spin-off.

How To Find The Creepy Crypt

Discovered in the Creeper Woods story mission, the Creepy Crypt is actually pretty easy to find. Once you’ve saved the poor, hapless country bumpkin during the mission, there will be a path which will snake around to the left. Follow this path to its end and at that point you will discover a massive temple structure. Here, simply press the button on the right side of the entrance door (it’s near the ground) in order to open it.

Once inside, don’t forget to make sure that you interact with the shiny on-screen map otherwise the Creepy Crypt secret level will not unlock. It’s also worth noting too that all secret levels are added to your main mission map, allowing you to access them at any time after you’ve unlocked them.

How To Find The Soggy Cave

Soggy Cave is the secret level that is found in the Soggy Swamp, however it is one of the more frustrating secret levels to find as there is a fair amount of luck involved as to whether or not you can actually access it. This means that you’ll likely have to replay the level a fair few times even after following the instructions below.

Assuming that Lady Luck is smiling upon you, to access the Soggy Cave you need to progress past the supply zone in the Soggy Swamp. If the secret has activated, the main path will branch off and lead to an all-new cave just before the Corrupted Cauldron boss of the Soggy Swamp. To unlock the Soggy Cave secret level, simply waltz in, flick the switch and loot the map.

How To Find The Arch Haven

The method for finding the Arch Haven secret level (assuming you’re on the right side of the RNG equation), is that you should see a winding path next to the side of a towering fort in the first half of the level. Following this path will lead you to a pirate ship whereupon you must descend to the lower decks and defeat all the monsters there in order to loot the map which will unlock the Arch Haven secret level.

A word of warning though – if you’re struggling mightily to trigger the pirate ship to spawn, don’t be disheartened. Many players have cited the fact that it takes multiple hours for it to happen, so if you’re determined to find it, you might need to set aside a hefty amount of time (and patience) to get the job done.

How To Find The Lower Temple

Another one of those annoying random secrets that doesn’t always appear, the Lower Temple secret level can be found in the Desert Temple mission; assuming you’ve been lucky enough to trigger it in the first place.

If you are lucky enough, the method for accessing the Lower Temple secret level is pretty straightforward. Once you’ve found the door which can only be unlocked with the golden key, you then need to cut into the next room where you’ll discover a trio of switches. Simply flick them all and the drawbridge will raise, allowing you to nab the map that will in turn allow you to access the Lower Temple secret level.

How To Find The Underhalls

No more random secret level triggers! Located right at the start of the Highblock Halls mission, all you need to do is make your way down the massive staircase until you discover a wall that has a pair of shields mounted upon it. Simply interact with one of the shields and then a secret door will open with the Underhalls map inside.

Once looted, simply interact with the map and access to the Underhalls secret level is all yours.

Possibly the trickiest of all the Minecraft Dungeons secret levels in terms of access, to find the ??? level in the game, you need to make sure that you have all nine of the runes from each of the main missions.

Once all nine runes have been collected, you’ll need to return to the Camp hub world and proceed past the house located in the south-east. If you wandered over there previously, you might have noticed a massive chasm that prevented access to the other side. Now, however, there are numerous springs that allow you safe passage past it.

When you reach the other side, cut between the pair of pillars and then take a left between a patch of trees which should take you down a hidden path. Keep following the path until you come upon a big church which you should immediately enter.

Once inside, proceed to the farthest end of the building and you should see some sort of button with a series of inscriptions above it that match the runes you have. Assuming you do have all the runes, pressing this button will then activate a door which will in turn provide you with the map for the secret ‘???’ level – a charming take on the cow level secret area that Blizzard’s Diablo titles have long been synonymous with.

After the map has been used, the ??? level will be accessible from your mission selection map in much the same way as the other secret levels are in this guide.