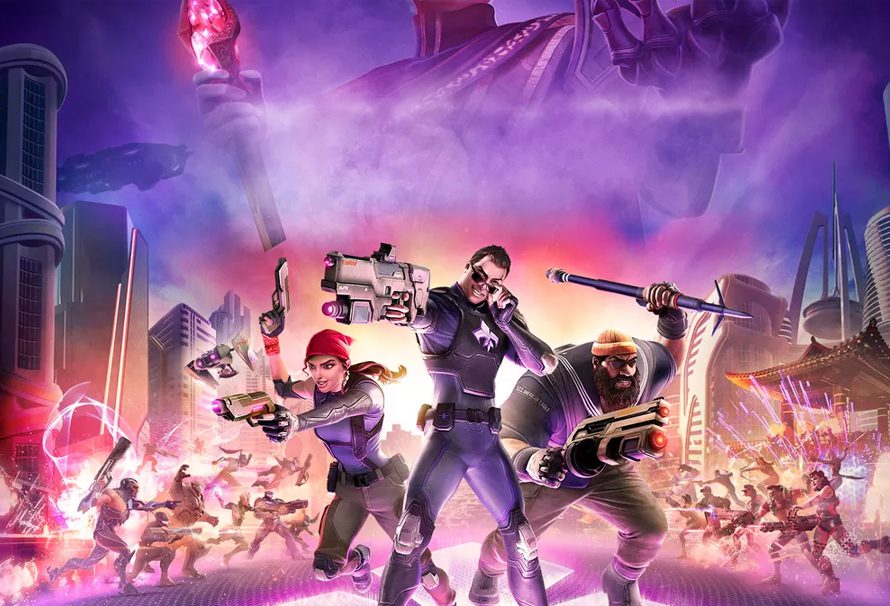 Agents of Mayhem is the upcoming Saints Row spinoff, from developer Volition. The game is an open world adventure set within the Saints Row universe. Playing as the goodies, MAYHEM are the organisation against that fight the baddies, LEGION. It’s a simple good vs bad story, stuffed full of all the silliness and crass you’d expect from a Saints Row game. The humour is spot on and the dialogue is as effortlessly funny as previous Saints Row games. So here are the agents who you’ll be able to get behind in Agents of Mayhem, landing August.

A total babe, she’s bold and in your face. She takes no prisoners with her larger than life mini gun and screw it attitude. She’s the berserker of the group and will be able to charge in with her heavy minigun and ‘kick out the jams’ ability, which she can use to stun large groups of enemies. Her minigun isn’t just any old minigun, it’s got serious force, with an increased rate of fire and minimal heat. She’s a bit of a rogue and hasn’t always played ball, which makes her exciting and slightly risky.

Equipped with a drone called Glory, Fortune is a feisty, cunning sky pirate. She has an honest, upfront to fights, using her dual energy pistols for short range fire. A quick tap of the guns will release a high amount of damage over large areas. Glory is also a blast to use, literally, it will blast nearby enemies when detonated.

Charming and deadly, Joule is fashion obsessed, but doesn’t let that get in the way of her brilliant engineering mind. She’s enemy focussed and builds excellent machinery and is able to summon a ‘Prima Touretta’ that gives off a large pulse, which stuns enemies. Her weapon of choice is a energy beam gun, keeping enemies at bay she is single enemy focused, but the wipeout is quick and probably quite painful.

Recently showcased as one of the ‘bombshells’ – the most volatile of the agents. Rama is sharp, quick witted and has a dark sense of humour. She uses a bow in combat, spraying streams of lasers at enemies. Her abilities also include ‘death trap’ and ‘patient zero’, which are more delectable ways to use her weapon.

The badass sailor, the gentle giant that has a particular aggression towards LEGION. Hardtack is the tank of the group, with his heavy shotgun and charging attacks which deal high amounts of damage. He can also throw a harpoon and stun enemies. Stunning enemies seems to be a theme for the agents, let’s hope it’s effective.

Another ‘bombshell’ of the agents, Red Card is the wild card, a manic in your face assault characters. Just waiting for the ‘go’ to charge into situations and stir it up. With his assault rifle and shotgun combo and bloodthirsty approach, Red Card can release explosive damage near large groups of enemies and is the character to cause more disruption and distraction.

A dutiful soldier, Braddock is a young, highly trained and diligent former corp. She’s experienced in battle and her actions are precise, dealing extreme amounts of damage with specialised ammo that cuts through armor and the character you’d want bossing.

Posing, constantly. Hollywood is a former star and celebrity, turned soldier for MAYHEM. He is a showboater and he does everything with a certain style and class, never a hair out of place. He is an up close and personal shooter, with fire bouncing grenades for attention and a special ability called ‘action hero’ – cue music.

Subject to experiments in Russia, Yeti is the gentle giant of the group. He is the powerhouse of the group and combined with his elemental powers, is an unstoppable force. He has a cold gun, which he can use to slow and freeze enemies – again, what’s with the whole stun thing aye?

The Saints Row legend himself Gat has been confirmed to return as an agent and we’re super excited for his incredible spectacle. Gat is a performer, playing as him is guaranteed Mayhem, but the guns will be tasty and the fight will be awesome.

Looking forward to Agents of Mayhem? Who do you want to play as? Let us know in the comment section at the bottom of this page.

You can also grab 15% off of Agents Of Mayhem right now! Use the code MAYHEM15, add the code to your basket before you check out.

Worth A Buy: Agents of Mayhem