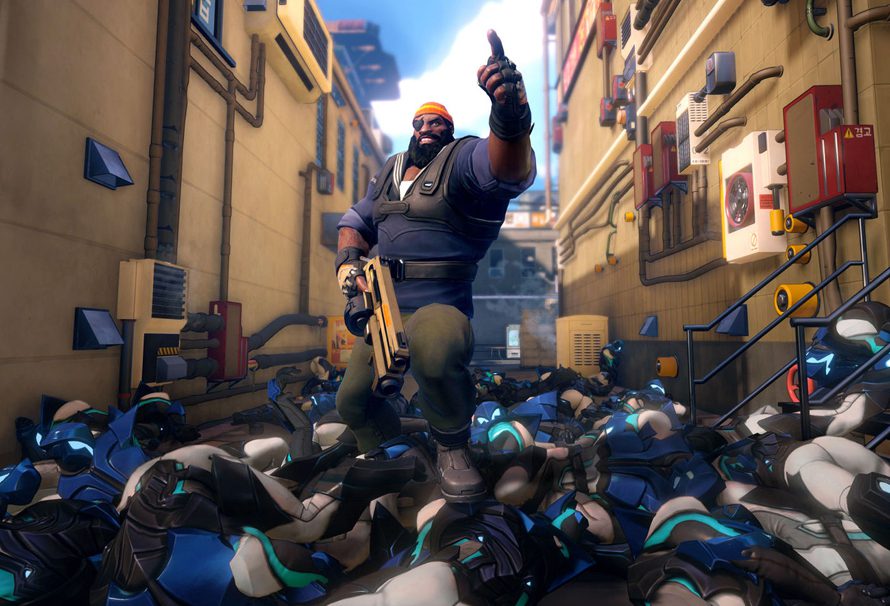 Before we get the ball rolling it’s good to highlight that Agents Of Mayhem is primarily a spin off of the Saints Row games. This means new players don’t need any prior Saints Row knowledge in order to fully understand Agents Of Mayhem, the game is its own brand new beast.

For the Saints Row loyalists out there Agents of Mayhem is in the Saints Row canon. In the Saints Row IV expansion Gat Out Of Hell the game ends (Spoiler Alert) with the universe ending and being re-created. The organisation who is behind this somewhat cataclysmic event is called M.A.Y.H.E.M, aka The Multinational Agency Hunting Evil Masterminds. This company was founded by Persephone Brimstone and funded by the Ultor Corporation. Ultor Corp are the main antagonists in Saints Row 2 and the Red Faction Series (more about Red Faction later) who then later merge with the Saints in Saints Row: The Third.

In Agents of Mayhem, players work for M.A.Y.H.E.M who also bear the famous fleur-de-lis logo the Saints used in the Saints Row games. In this alternative reality (or universe if you prefer) M.A.Y.H.E.M are the good guys whose main goal is to stop the the League of Evil Gentlemen Intent on Obliterating Nations (or  L.E.G.I.O.N) from destroying the nations of the world.

As mentioned above, much like in the Saints Row universe, Persephone is the founder and current leader of M.A.Y.H.E.M. In Agents of Mayhem, she is a former lieutenant of L.E.G.I.O.N and is currently in the back pockets of the Ultor Corporation, who fund M.A.Y.H.E.M.

Saints Row fans will recognise  Johnny Gat from the Saints Row series. Johnny is a M.A.Y.H.E.M field agent. Born in Seoul where Agents Of Mayhem takes place, Johnny becomes a M.A.Y.H.E.M field agent after he awakens from a year long coma. When he wakes he finds out that his old police unit has been wiped out and replaced with robots. Brimstone hires Johnny to join M.A.Y.H.E.M, as she believes his reputation is a perfect fit for the team.

Kingpin, aka Pierce is one of the founding members of the Saints back in the Saints Row universe. In Agents of Mayhem he is a field agent, Kingpin was formerly a gang leader and feared in the criminal underground before M.A.Y.H.E.M took him on.

Also know as Oleg Kirlov, in the Saints Row universe, Olge is a former KGB agent who is saved by the Saints in Saints Row: The Third. In Agents of Mayhem, Yeti was a part of a controversial experiment fronted by L.E.G.I.O.N known as Cold Warrior. This drove most of the test subjects mad but Yeti was able to escape with his new found powers. He was then picked up and recruited by M.A.Y.H.E.M.

Over The Top Wackiness

Much like the Saints Row universe, Agents of Mayhem promises the same level of over the top gameplay that players fell in love with during Saints Row: The Third. Expect lots of quips, tongue in cheek humour and parodies of 90’s cartoons to boot.

You Should Also Play Red Faction

So that is what we know so far about Agents of Mayhem fitting into the Saints Row universe (and possibly Red Faction if theories are to be believed) Will you be picking up Agents of Mayhem?

The Five Most American Videogames