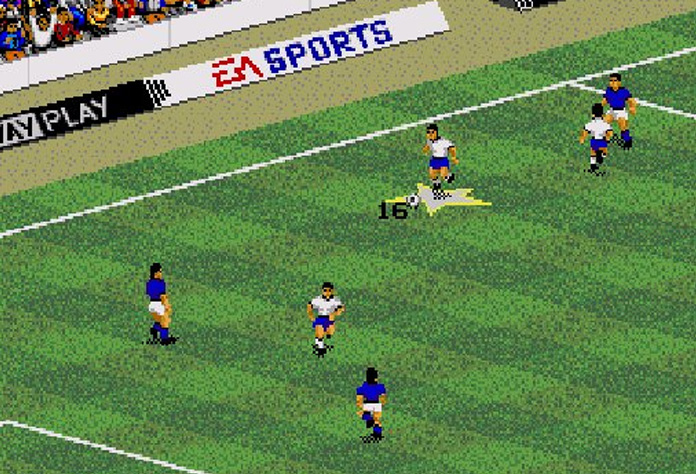 FIFA 18 is coming out later in the year, so we’re heading back to the ol’ flat rectangle, the ol’ kicking field, the ol’ jamboree of legs.

FIFA 18 is the latest in the long running FIFA series, but do you know about all the previous ones? Here’s all the FIFA games that have been released so far, to whet your appetite for more FIFA.

The original FIFA was a straight up recreation of the World’s Greatest Sport. Football. It featured teams such as Overton Wanderers and The Big Kicker Kings in incredible graphical fidelity.

The second FIFA took the game series a step further, featuring different stadiums all round the world with every single blade of grass being individually modelled. Move over Pixar, FIFA is here!

Billed as the ultimate FIFA experience, FIFA F put the focus firmly on football. Every kind of football was there, from the official FIFA branded balls, to a rolled up pair of socks in a balloon, like the kind of football that children would use on the streets.

With this entry, EA took the grand game of football into the 4th dimension, that of time. Featuring speed up, slow down, reverse time, rewind time, make time go upside down, and ‘black hole’ settings, the world of football has never seen chronological japes like this. Unfortunately, this version was never released as the disc required to run the game was a metre wide, meaning it couldn’t fit into any but the most gaping of DVD drives.

FIFA: The One With Footballs

After the disaster of FIF4, EA decided to go back to basics and put football back in the limelight. FIFA: The One With Footballs featured footballs, everything was a football, from the crowd to the players, to a secret multiball mode where a thousand balls would appear on screen every time Football United scored. Unfortunately critics were not kind on this instalment, with it only getting 1/10 from noted Football fansite, Rock Paper Shotgun.

FIFA: Back in Black

After the second disaster of FIFA: The One With Footballs, EA decided to offer up a simple football game. Featuring a retro style, FIFA: Back in Black is set in the early 1900s, featuring footballers dressed in long shorts and old-timey-animations. The game didn’t sell amazingly well, but was highly regarded as an avant garde look into the brains behind FIFA. It is also notable for its anachronistic soundtrack, with its music being provided by AC/DC.

What’s better than football, EA wondered to itself. Football where the opposing side is made up of Capcom characters! EA was struggling financially during this year, so teamed up with Capcom to release the superlative FIFA vs Capcom, the game which single handedly kickstarted EA and Capcom’s finances, and led to the fine tradition of crossover games that we’ve seen since.

With FIFA vs Capcom being a critical and financial success, EA decided to follow it up with another crossover, with the incredibly popular and wildly successful Police Academy series. FIFA: Mission to Moscow was a madcap game featuring a single player campaign where you as Steve Guttenberg take on the Russians in a fight to the death…but with footballs!

It didn’t do well.

FIFA decided to go serious with this one, taking the game to Switzerland for high fidelity football action, featuring appearances by Sepp Blatter amongst other FIFA luminaries, it let you build your own team and take them right to the top of the football tree, eventually deciding the rules of the game for yourself.

EA brought on a new team to take control of FIFA for this instalment, and they decided that the failing of previous games had been that the focus had been on the balls, not the legs. In this game, you play a huge footballing monster called Ambulatoria with the goal of kicking every item in the universe into a net made of stars. Featuring mechanics similar to the Katamari Damacy series, it had you starting off small, kicking individual grains of sand, until you worked your glutes enough to be able to boot the solar system past Ganymede and back.

FIFA got its own Saturday morning cartoon series, and the development of this year’s FIFA followed the cartoon. Featuring a lovable cast of footballers, such as Wayne Racoons, a raccoon, Daniel Stoattage, a stoat with attitude, and Raheem Starling, a bird with amazing air control powers. It followed their adventures as big bad Dr Seppster tried to get them to play football even when they were tired or had school.

It was cancelled after one season.

This was a port of the original FIFA, optimised for newer systems and with the teams updated. Gone were The Big Kicker Kings and in were modern teams like Football 2000 and Football_Hashtag.

FIFA (The ‘A’ Stands for Animals)

Deciding that human players were not only too expensive to licence their appearances and they were also too complicated to animate, EA went with animals for this version of the game. Similar to Tokyo Jungle but set in football grounds, FIFA (The ‘A’ Stands for Animals) let you choose your animal, and play football with them until they attracted a suitable mate.

With rumours besmirching the real life game of football, FIFA: No Corruption Here Edition aimed to clear its name by showing that football is good, clean fun and that any allegations of corruption or any wrongdoing are simply untrue.

Time to cast off earthly concerns, FIFA next went into SPACE! Where the only rules are the rules of physics, and even then who cares about them when you’re booting a ball into a gravity well caused by a collapsing star? Or using the frozen rings of Saturn to rebound a shot?

(All joking aside I’d totally play this one).

FIFA 17 introduced a new character to the world of football, that of Alex Hunter, a plucky young hopeful who aimed to kick every ball he could. Over the course of the single player ‘Journey’, Alex Hunter grows in power and influence, until he can command vast armies of footballs that he can kick en masse to fulfill his perverse desire to kick every ball ever made. Alex Hunter’s Journey will continue in FIFA 18!

So there we have it, all the FIFA games from the very first one until now. Did we miss your favourite? Let us know in the comments below, and remember that FIFA 18 is available for pre-purchase now!