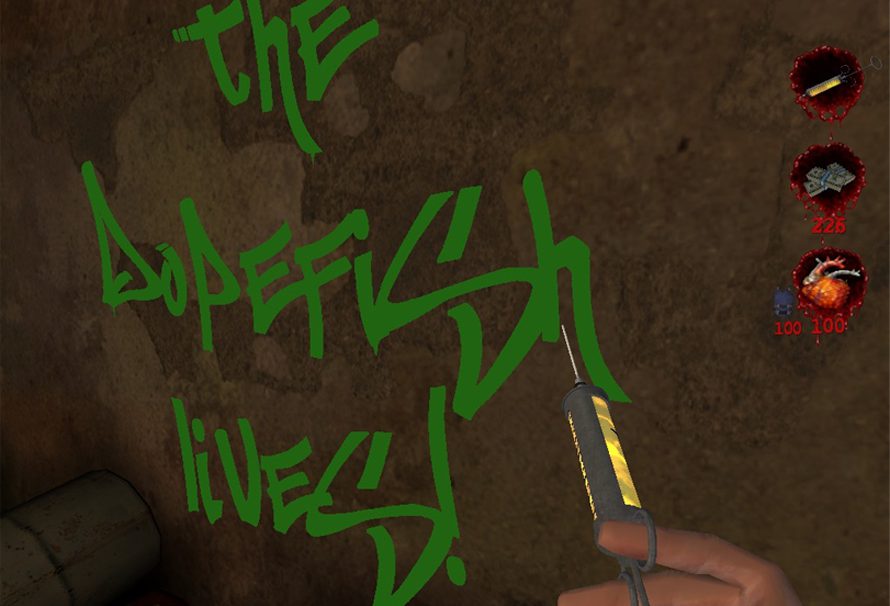 Games have transcended the simple act of being entertainment to the realms of art, and even culture. It is theorised video games have been around in some form since as early as the 50s but it has had a hold over our collective heart since it really entered the mainstream in the 70s. Well, today, May 25th, is Geek Pride Day and such, we felt it deserved a little appreciation. Geek is a word that has turned from stigma to something that is appreciated, to something ironic and back again so many times it’s hard to count but regardless of what you call yourself, if you’re here, you probably appreciate video games. Not one to disappoint, we thought we would tell you about some of our favourite in-jokes in gaming.

id have a long history with Doom, Wolfenstein, Rage and uhh Commander Keen. Perhaps one of the most frightening enemies out of all these titles is the Dopefish from Keen 4, a large stupid fish that can be found in the waters of The Shadowlands. It is green, has small fins and enormous buck teeth. Although it has never been stated, I assume it is slimy. This unassuming and stupid creature has a weirdly wide footprint on the web from a wall painting in Tower of Guns to “DOPEFISHLIVES” being written on the wall in blood in Killing Floor and a reference in the original Quake. In this, you must traverse the side of a wall to reach a secret area with the “Well of Wishes” inside. When you swim downwards, the dumb frozen eyes of the Dopefish stare at you as “The Dopefish Lives!” crawls across the screen. Chilling

The Diablo franchise, for the most part, has been a rather dark series so, when Diablo 3 was criticised for having too colourful a palette, Blizzard created a tongue-in-cheek way of hitting back. Thus, Whimsyshire was made. It’s bright, fun and utterly sickly sweet featuring flowers, unicorns, and teddy bears to mercilessly slaughter. The entirety of the level feels different to the rest of the game even going so far as to make the map look like a child has drawn it. Unfortunately, the process for getting there is long and tedious and would take the entirety of this list if we explained it so make sure to check out a guide and try it for yourself.

John Romero, of Doom fame, is a prevalent figure in the video game industry influencing countless creatives. It’s hard to say how games might be different if it weren’t for the work he has done. Needless to say, it’s fair enough if he has a bit of a big head. Not in the terms of arrogance but like a big head in Doom 2. If you combine enough determination and a no clip cheat, you can find his head on a pike hidden in a wall in the final level. What makes this better is shooting him directly hurts the final boss, fitting given he’s the creator but very strange. A true visionary

Menial tasks are often hard work. Forgetting to add a full stop, the right punctuation or in the case of Hitman, details. In Hitman Blood Money, a multitude of items had descriptions when you looked at them. One such item, a crate designed for concealing weapons, instead simply stated “Allan please add details.” when the game got an HD remaster a decade later, it was now replaced with “Any details yet, Allan?” This was further pushed In Hitman 2016. The title screen has computer code layered in the background. One such line asks alan to remove placeholder text. Alan can’t catch a break.

Capcom and Valve are both companies that know how to laugh at themselves. That’s why the genocider in-joke has prevailed as long as it has. In the original Dead Rising back in 2006, there was an achievement for killing 53594 zombies, the population of the city of Willamette, entitled “Zombie Genocider.” Left 4 Dead made reference to this in its “Zombie Genocidest” achievement for killing 53595 zombies. Not one to be outdone, Dead Rising 2’s “Z-Genocider 2: Genocide Harder” achievement had you kill 53596 zombies. Valve have shown they can’t count past 3 so they dropped out here but this tradition has since been picked up by other Dead Rising games as well as Dead Nation and Prototype. That’s a lot of dead zombies.

I know this list has been weirdly Id software heavy but the Doom guy/ Doom Marine/ Doom Slayer is so widely referenced he deserved his own entry. In Duke Nukem, he is found dead in a secret level where the Duke proclaims “that’s one doomed space marine”. Classic Duke. The Doom Guy is a secret playable character in Tony Hawk’s Pro Skater 3, there’s a whole host of Doom references in id software titles, and references have even been made in more recent times such as the Samuel Hayden from the (fantastic) 2016 Doom reboot being mentioned in the cult hit, Bendy and the Ink Machine. With activities such as skateboarding, coding and uhh death, Doom Guy sure does have a pretty great resume.

And that’s the list, hope you have a great Geek Pride Day experiencing all this unique medium has to offer. This is just a taste of the easter eggs and in-jokes throughout the 50 or so years that gaming has been part of the mainstream. Feel free to tell us what you’ve found and what your favourites are. Have a great day!