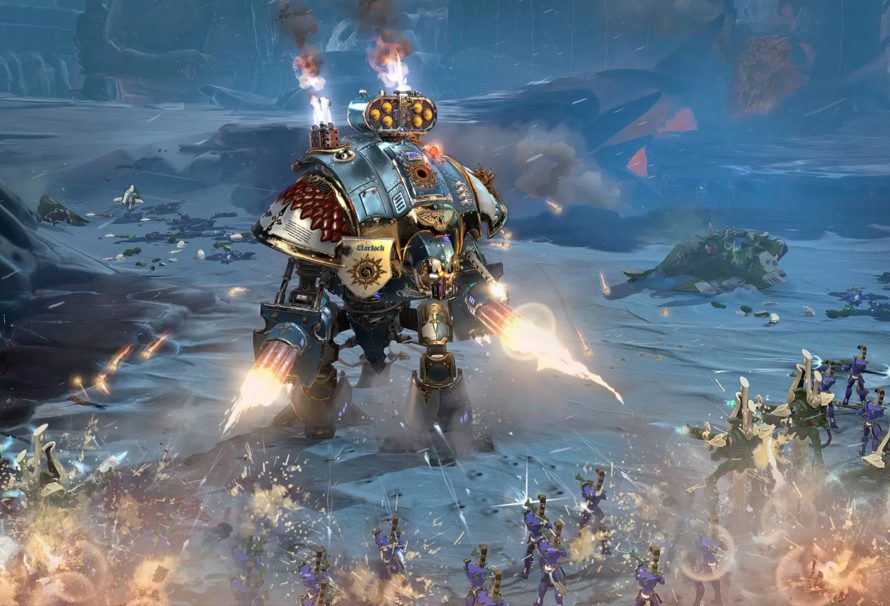 Some of us here at Green Man Gaming are huge Warhammer fans, and as such we have played lots (and lots) of the Dawn of War III beta over the weekend. I’ve asked Milo and Alex E what their impressions were, and what they thought of the Beta.

So, guys, what was your overall impression of the Dawn of War III beta?

Milo: It’s fun. It feels like it was designed for hardcore RTS players in some ways and for non-RTSers at the same time, which can make it feel a bit confused. It will surely need lots of work for balancing.

Alex E: From someone who’s played both Dawn of Wars but not played MOBAs, I was concerned I would be thrown by the MOBA/RTS mechanic mix here, but I actually like the progression of target objectives (shield gen->tower->power core). It adds another layer of strategic choice: do you engage & counter enemy units for board control, do you reinforce your resource point territory for the supply advantage – or do you try to distract the enemy while wearing down and knocking out their shield gens as early as you can?

Milo: Yeah the MOBA stuff actually works really well. The shield gen/tower/nexus setup is good for the pacing for the game and inhibits cheese or rushing tactics. The pre-selection of heroes and passive/active doctrines means you can set up to play your own way, though it could railroad you into playing one way and then the game may dictate a change in tactics. Lots of units have active abilities that are mapped to QWER. To be honest, that’s about as far as the MOBA stuff goes. It’s a scary word and all the nerdrage is a bit misplaced.

Sounds likes an interesting mix. What was your favourite unit that you got to use?

Milo: Epic hero units are the coolest. Watching my Eldar Wraithlord hack down an Imperial Knight while the skirmish happened below them was REALLY VERY COOL.

Alex E: Elite units are very cool, and the more you learn their quirks, strongest abilities and respective kryptonites, I’m sure the more effective they’ll feel. However, to the new player, they feel squishier than I expected. MOBA noobs who find themselves dying instantly to heroes who appear to take no damage at all will find elite combat in DoW familiar. That said, their abilities tend to be fun, satisfying and beautifully animated, and when you clinch a fight with a well-timed elite deployment, it’s extremely satisfying. I’m really looking forward to them releasing loads more elite units to unlock and deploy, to customise your army to whatever bit of 40k lore is your favourite.

Speaking of 40K lore, what do you think of the different races? Do they feel unique?

The Eldar are complex and challenging. Very mobile and very squishy. Mostly everything you’d expect them to be – potentially really strong but some real practice required as their effectiveness will come down to their positioning, smart attacks, harassment and mobility around the battlefield.

The Orks are great fun, some really cool mechanics that are unique to them – particularly cool is the ability to build units mid-battle from destroyed buildings/vehicles on the battlefield. Waaaagh mechanics are in. Again, probably more micromanagement needed to get to their potential.

Alex E: The sound is bloody excellent; some of the units’ repeated phrases can get a little grating (as ever) but overall the sound atmosphere is awesome. Activating a Waaagh tower’s heavy metal serenade to get your Boyz all fighty just feels energetic and spot-on orky.’

Milo: Yep, back to the epic all-out war of Dawn of War 1. The mechanics are similar with Requisition and Power points to capture and hold, as well as “elite points” which generate a resource to deploy your selected elite units. Also, base-building is back but it’s really a base-building lite. There’s only a handful of buildings and no meaningful tech-tree decisions to make.

Alex E: The game has a lot of similarities to Company of Heroes 2 and other Relic RTSs, but one feature that’s pointedly different is unit withdrawal: in CoH, you can hit R on any unit or group of units, and it will automatically sprint back to base for healing. This quickly becomes really important. In DoW3, you can only do this for all your units at once, which makes it much more difficult to control several combat groups in different areas of the map, and encourages you to blob your units into a single force most of the time. Again, less of a problem if you’re in 3v3 and laning.

Finally, how do we find the game’s balancing and pacing? Are the battles epic enough?

Milo: Battles in the mid-late game become huge, while the early game skirmishes remain very interesting. It makes for some interesting pacing as the early game is very tactical, losing an early unit or resource point could really hurt you, while in the late game the battles can be almost overwhelming to manage, though with more experience playing the game this would surely become a little easier to micro.

Alex E: I think the balance of the gameplay is very much geared towards the game’s main 3v3 multiplayer mode; playing 3v3 with strangers can get chaotic quite quickly, but teaming up with two mates (who you have on comms) would let each player keep their focus on a smaller area of the map, freeing up more brainspace for tactics, unit micro and using units’ various cool abilities (whose teeny little buttons often get forgotten in the apocalyptic firefights that fill every late- and endgame).

Thanks guys. See you on Thursday for release!

There you have it; did you play on the Beta? What did you think? Let us know in the comments, and tell us which race you’ll be playing first when the game comes out!