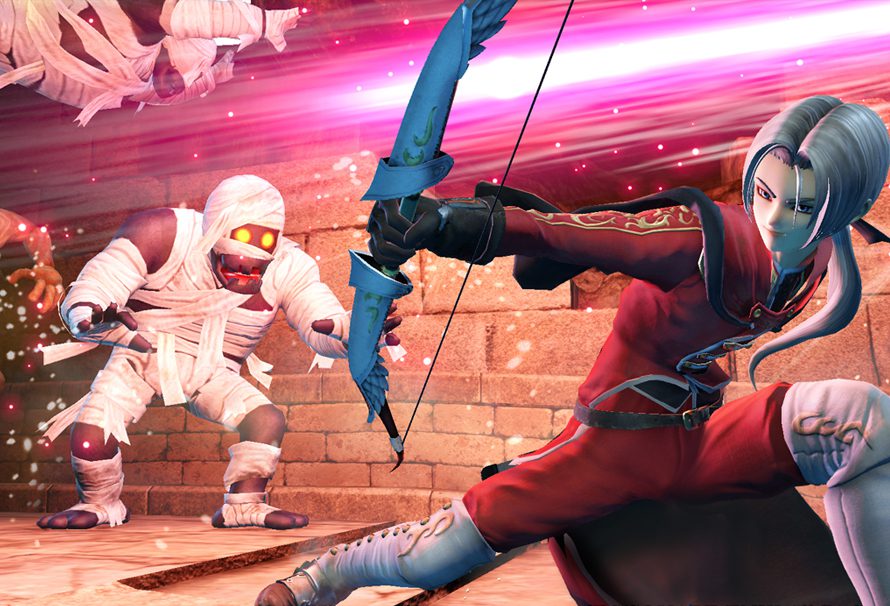 Dragon Quest Heroes II is out TODAY and it’s a hack ‘n’ slash game with RPG elements thrown into the mix.

I’m a big RPG fan, in that I’m a big human who is a fan of RPGs, and I also like RPGs a lot. So, inspired by Dragon Quest Heroes II, here’s my favourite RPGs for your visual digestion!

Fallout 2‘s tone is definitely lighter than the original’s, but it’s partially that which makes me love it. That and the game is just…more. More in every sense, you get almost no time limit this time around, you get proper companions with control over them (that said, Vic will still shoot you in the back a million times), and you get such a bigger world to play in. Basically the game would be one of my favourites anyway, and then you get to New Reno. New Reno is everything, it’s a wretched hive of scum and villainy with gambling, prostitution, mob families, drug dealers, and a boxing ring. Want to join a mob family and rise to the top, much like scum in a pond? You can! Want to become a porn star? Make sure your endurance and agility stats are high enough first! Want to punch out The Masticator? You can, but if he bites off your ear you’d better reload (the game even tells you this)!

Fallout 2 is definitely lighter in tone than the other games, but it makes up for that by cramming the world with life, with fun, and with a million things to do.

Imagine a fantasy world where you can do almost anything. Now imagine that world is filled with elves with red eyes who hate you even though you might be their promised messiah, giant mushrooms, giant insects, and a god hiding in a volcano. Welcome to Morrowind! Still held up as the paragon of the Elder Scrolls series, Morrowind isn’t perfect by a long stretch, the combat is wonky, character models aren’t the prettiest, and even though everyone has lots to say, they tend to say the same things. That said, its sense of place is unparalleled. You really get to know Vvardenfell, you learn every inch of its beautiful terrain and its cities. To me, in a big way, Vvardenfell will always feel like home. I’ve spent many happy hours just wandering the streets of Ald’ruhn, popping into the Scar for a browse and to check in with my Redoran brethren.

If you want a home away from home, I’d recommend sunny Vvardenfell. Stay a while, outlander!

Taking place largely on a toroidal city on top of an infinite spire, Planescape: Torment is just as weird as you might think from that brief description. The idea behind the Planescape universe is that there’s a multiverse, and you can easily, and accidentally, hop into different dimensions or planes. This means that the world is a glorious melange of different species, different ideas, different universes. As the Nameless One, an amnesiac who can’t die, you’re on a mission to find out who you are and why you’re immortal. On your way you’ll encounter amazing creatures who join you, from floating snark-skull Morte, to a robot box voiced by Dan Castellaneta from the Simpsons. You’ll find signs of previous versions of yourself and your impact on the world, and slowly you’ll put together the mystery of the Nameless One.

It’s just had a remastered version released, so if you can, check that out!

Before Naughty Dog made cinematic masterpieces for the PlayStation, before the days of jumping on things, before all that, there was Rings of Power. A little known RPG for the Megadrive, it was an open world isometric party-based RPG and it’s a thing of beauty. Just look at that world map, LOOK AT IT! You can walk on every inch of that world, and zoom into each square for a closer look. Playing as Buc, a young sorcerer, you’re tasked with reuniting the eponymous rings of power to reform the Rod of Creation and banish the evil Void from taking over the world. You assemble a small team from each of six magical specialisations, and then off you go into this wide open world to accomplish this task in whatever order you like. If there’s a flaw with Rings of Power, it’s that the random encounters can be a little too random, meaning you can encounter a party made up of the toughest enemies in the game within a few seconds of starting the game, forcing a reload. That said, its breadth and scope is amazing, and it’s one of the few truly expansive RPGs to put in an appearance on the Megadrive.

It’s hard to check out today, but if you’re near a retro games shop, I’d definitely recommend picking it up.

Made by the people who created Planescape: Torment, Torment: Tides of Numenera is the most recent game on this list. Successfully funded by Kickstarter, it takes place far in the future on Earth, in the tabletop Numenera setting. The world of Torment: Tides of Numenera is so far in the future that technology has become like magic, but civilisation exists on the bones and crumbs of previous civilisations. This means that there’s loads of items in the game which have uses, but you’re never sure if you’re using them for the intended purpose. Something may act like a grenade, but maybe it was designed as a hair straightener in a prior era.

The real joy of this game, much like Planescape: Torment, is the writing. It’s absolutely fantastic, every conversation has at least one moment where you need to take a moment to look at what’s been said and digest it properly.

The best start to a series, ever. Dragon Age: Origins is all about the…origins, unsurprisingly. It lets you choose between different races and each one has a truly fascinating backstory and intro into the world. The city elf couldn’t be more different to the human intro, and each one gives you a solid foundation on which to start your own roleplaying, and also sets you up with an idea of how the world works. From there the game just gets better, throwing you full on into the intrigue and machinations of the world of Thedas and the Ferelden court. Taking on the role of a Gray Warden, you’re tasked with stopping the Blight from taking over the world, but to do that you’ve got lots of battles to fight. Not just against evil, but against your political enemies, against racism, and against bigotry. For example, if you’re an Elven Mage, expect to see the world turned against you!

Dragon Age: Origins is a superlative RPG, and a great start to a wonderful series (I’d maybe include Dragon Age: Inquisition here, but I’m only half way through it!).

Another game by InXile! Wasteland 2 was also funded by Kickstarter, and it’s a sequel to a game that came out in 1988! It feels very similar in some ways to the older Fallouts, but it’s mostly much more serious. Set in post-apocalyptic Arizona, you’re part of the Desert Rangers and you’re trying to bring stability to the region. Obviously there’s a lot that goes wrong, but the game really lets you explore your impact on the region and the ways you can influence people’s lives. An early quest makes you decide between two settlements in peril, and whichever you save, the other will be destroyed. It’s a tough call, and it has huge ramifications.

The part of the game which stunned me though was the point where I’d finished it, and the game was winding up. In fact the game was just at the halfway mark and a whole new world map opened up for me. Amazing!

So, those are my favourite RPGs, hopefully I’ll be adding Dragon Quest Heroes II to the list as well! What are yours? Let us know on social media, or in the comments below!

Every Fallout Setting Ranked From Worst to Best