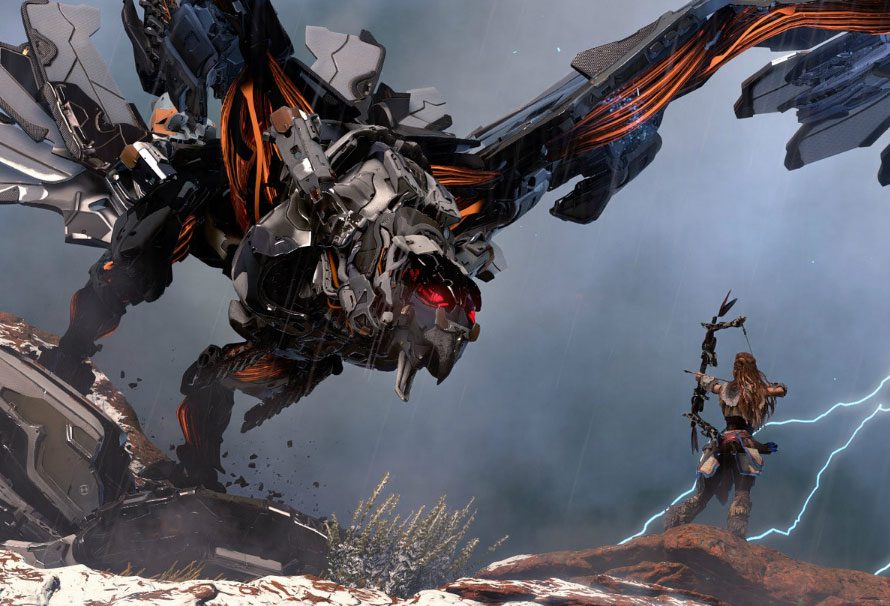 Horizon Zero Dawn is available now on the Green Man Gaming American Store. So we thought it would be a great idea just to see what sort of beasts you will come up against when you jump into the shoes of Aloy, and take on the post apocalyptic, machine ruled world.

The Acquisition Class Snapmaw may look like your average friendly crocodile but it’s bite is worse than its mechanised raw. Even though it’s challenge level comes in at 20 it has a fearsome arsenal of moves that can even take the most seasoned hunters by surprise. It has a freeze burst projectile move plus a devastating array of melee attacks which include the lunging jaw bite, the jumping jaw bite the snap bite and the tail strike.

This beast comes in at a whopping level 25 challenge level and is a Transport Class machine. It’s big, beefy and packs a hell of a punch in combat. In combat the Behemoth uses projectile moves such as the Gravity Boulder Throw and the Grinding Shrapnel blast which have the potential to deal massive damage, it also packs a hell of a punch with it’s melee moves which include a charge attack, a quake smash and a charging quake smash. Be warned though as it’s special attack, the Gravity Purge has the ability to control the gravity around it.

A combat class robot, the Stormbird is a formidable opponent as the combat challenge level of this mechanical Phoenix comes in at 27. It’s projectile moves include a shock blast, shock burst, thunder bomb run and a hurricane blast. With melee such as beak smash, thunder rush, jumping claw slash and tail lash coming nose to nose (or beak to beak) with this bird is not on your priority list. Many have succumbed to it’s special move, the Thunder Clash and have not survived to tell the tale.

The combat class Thunderjaw is a the robot equivalent of a T-Rex and is one of the most feared beasts within Horizon Zero Dawn. With a challenge level of 27, hunters are advised to approach this beast with extreme caution. The Thunderjaw comes equipped with Machine guns, Disc launchers and mouth lasers. It also has some devastating melee attacks which include a bite attack, a rushing bite attack, a charge attack, a foot stomp, a tail slam and a tail swipe. The Thunderjaw also has a radar scan ability that can pick up hidden threats at a distance, so be advised if you cross paths with this beast, chances of survival are unlikely.

How to mark Earth Day with environmentally aware games