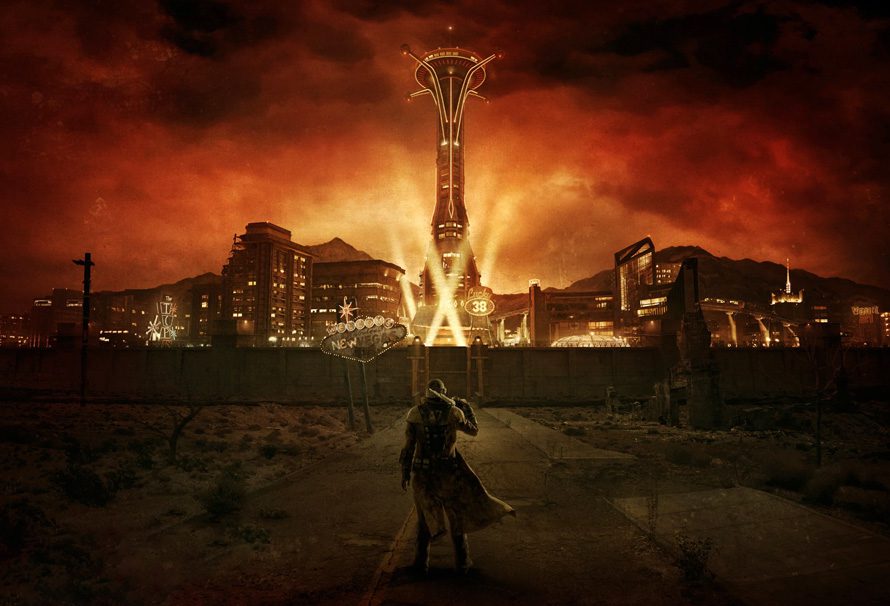 The sound becomes a cacophony, you can only hear the syllables echo through your head, FALLOUT NEW VEGAS the voices shriek, blood begins to pour from your ears, darkness comes from you. The last thing you hear before you fall to the ground is Fallout. Fallout: New Vegas.

So why does Fallout: New Vegas cause such passion amongst fans? Take a look at the reaction to our Fallout Games Ranked article, universally the response was ‘New Vegas should be top’.

Maybe you’ve played it but not touched it for a bit, or maybe you’ve never played it. Here’s why you should revisit Fallout: New Vegas, cos they’re right. It is brilliant.

It’s no secret that Fallout: New Vegas was a bit…buggy on release. Enemies spawning inside rocks was common, quests were unfinishable, the game would crash occasionally, and the physics engine couldn’t quite cope with people being blown apart, Robocop style.

Thankfully since then we’ve had some patches which have improved the stability of the game no end. It’s in a much better condition than previously, and whilst yes, enemies still like to spawn inside rocks and attack you, most of the bugs that would actually interfere with your ability to play the game are gone.

That said, if you do come across bugs…

Modders love to mod, and Fallout: New Vegas has a billion mods that can turn the game into anything you fancy. Even at a basic level, there’s a few quality of life mods that are probably worth taking no matter what, such as the Unofficial New Vegas Patch, which fixes pretty much everything that Oblivion weren’t able to.

But if that’s not enough for you, why not update the textures? How about making the game more difficult and varied? How about more weather? More weapon mods? New missions?

Look basically, if you want a thing, there’ll be a mod for it.

What are the Fallout games about? In general themes.

The first is about saving your people.

The second is about saving your people.

The third is about finding your dad.

The fourth is about finding your son.

New Vegas is about deciding which ideology you think should take a pivotal role in rebuilding the post-apocalyptic West USA.

This isn’t a politics blog but due to the range of values and ideologies present in New Vegas, there’s certainly parallels you can draw between the in-game fiction and the real world. Maybe the idea of a demagogue riding the wave of popularity using people’s worst tendencies strikes a nerve? Not that we have anything to say, of course. Wouldn’t dream of it.

The Soundtrack Just Gets Better and Better

The New Vegas soundtrack lacks the jolliness and ‘funny’ songs that you get in Fallout 3 and 4…and it’s all the better for it. With the wide open deserts in front of you, a soundtrack full of cheer wouldn’t fit. Instead you get songs about Johnny Guitar, Sin, being Mad About the Boy, it’s soulful stuff and it hits hard, and as you get older it’ll just hit even more chords.

Well, there’s also spurs that jingle jangle jingle, but you need a little light with the dark.

The DLC Is Not Always Great But When It Is…Wow

I’ll be honest here, some of the DLC is troubled, especially when it comes to actual play. Honest Hearts is a bit simplistic, Lonesome Road is a corridor shooter, and Dead Money takes a turn into survival horror with a game engine that creaks around the edges.

But forget how they play. Lets talk themes.

Honest Hearts is all about pacifism and how to deal with a threat, it’s about dealing with your past and either running away from it or facing it.

Old World Blues is palate cleanser, it’s comedy in a wasteland that has little. It’s a laugh when you’ve been surrounded by guns and misery for hours. It’s needed. And also it’s about finding your place in a world that’s changed around you.

Lonesome Road is about providing a dark parallel to your own journey, about showing you the consequences of your actions, even when you didn’t think those actions had consequences.

It’s Dead Money that hit hardest for me. It’s about letting go. It’s about moving on. It’s about realising that you can’t have everything, and maybe having everything isn’t always the best. It’s about greed, and the follies of greed.

I’m going to link the ‘good’ ending of Dead Money here because it’s beautiful. SPOILERS IF YOU HAVEN’T PLAYED IT.

I er…I’m not crying. You’re crying. Shut up.

New Vegas is a brilliant game and one that, despite some of the visuals, has aged incredibly well. It’s like a fine wine, it gets better all the time.

Also right now, it’s currently dead cheap in our summer sale. So maybe check it out if you haven’t, and if you have checked it out, maybe give it another go. The Mojave desert is waiting for you, courier.

Every Fallout Setting Ranked From Worst to Best