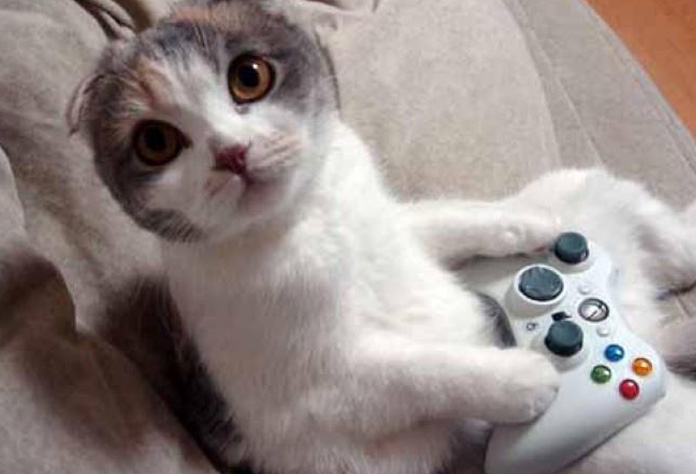 CATS! We love ’em, you love ’em, and they love ’em. Of course cats biggest fans are cats themselves. They’re not like dogs who are massive bundles of joy and love, cats are moody creatures. They take affection and give only when they want to, they kill and claw and preen and look beautiful. Cats eh? Love ’em. They’re bastards, but they’re cute bastards.

We covered the best dogs in videogames before but today it’s that most wonderful of days; it’s International Cat Day! Let’s celebrate the absolute best felines in videogame history!

She might look fierce, but Alvina just wants to protect the area around Artorias’ grave. Chums with Sir Artorias and the great Sif herself, she helps you join on board as a Forest Hunter so you too can pitch in and protect Sir Artorias’ grave. Like any cat, she’s fiercely loyal and will hunt down any transgressors with the help of the Forest Hunter covenant. So go on, have a chat with her, just don’t mess with her. She’ll mess you up.

Dusty is definitely cat shaped, even if they might not necessarily be a cat. Dusty is made of stars, and Dusty is also the source of Kat’s powers in Gravity Rush, meaning without Dusty it’d be a rather shorter game about ‘falling off a thing and then splatting’. In the sequel we find out that Dusty is the Sphinx Guardian, so well done catto, dream big.

There’s several different subraces that make up the feline Khajiit, from the humanoid-ish Ohmes-raht seen in Daggerfall, to the Suthay-raht who you see around Vvardenfell in the Morrowind province. They can look like humans with catty features, to full on bipedal felines who can’t wear shoes or closed face helmets. They have a bit of a habit of being, how do you say this, ‘drug fiends’, loving Moon Sugar and Skooma and putting Moon Sugar in every kind of food they eat. But it’s ok, because with a bit of love and the readings of Clan Mother Ahnissi, even the most committed skooma-addict can enter rehab.

The star of Catlateral Damage is a cat. You are the cat. Swipe things. Be a naughty cat. Get points. Smash things. Be a bad cat. There’s other cats to be, but they’re all cats. That are naughty. Bad cat. No tuna for you.

Look I ain’t got much to say about this one, you’re a cat.

Oh I just can’t wait…for the level where you’re running away from a stampede to end. The Lion King features Disney’s best cat (sit down, Aristocats fans) and does so in a game that’s surprisingly good, difficult, and features pretty much all the high points of the film. From Hakuna Matata to grownup Simba, the game covers the film pretty well, even if it has some difficulty spikes which you’d think QA would’ve spotted before release. That said, it’s alright, it’s good to be king.

This non stop comedy adventure game features hilarious wacky cats who are always helping protagonist Susan Ashworth out in her barmy funtimes throughout The Cat Lady.

Right hopefully that’ll trick some people into getting The Cat Lady and then being utterly horrified by what they find.

The Cat Lady is a terrifying horror adventure point and click game with a cast of cats that lurk around the edges of the game and the main character, Susan. They call out and yowl at you, sometimes with human voices in the cacophony. They also show off Susan’s softer side as she will look after them, and when the piano’s played they’ll arrange themselves to listen. But don’t get on the wrong side of the cats…as you’ll find out if you play The Cat Lady.

The large king of Ding Dong Dell, King Tom’s got that essential cattiness down to a T. When you meet King Tom he’s in full lazy cat mode, just lying about until you restore some enthusiasm to him and he kings it up again. Like any good cat, he places high pride in his cleanliness and also good…woodwork? He also loves his favourite Red Herring, which proves that even kings like to play.

Alright first off, Red XIII is definitely a cat, not a dog. Yes he is. Yes he is. No you shut up.

Glad we’ve got that sorted. Red XIII, or Nanaki, is first encountered in Shinra Tower where he’s been experimented on. Through journeying together, you find out what happened to his father and honestly if you’re not crying at that part then you’re a monster. He’s obsessed with guilt over his father when you meet him, but over time he thaws a little and when you find out what happened in Cosmo Canyon he opens up a little to you. But for all that, he’s still a grumpy little fire-cat, and that’s why we love him.

I had to include Meowth, didn’t I.

Blinx stars in the world’s first 4D action game, whatever that means. Blinx, armed with his trusty vacuum cleaner, has control over time itself and can speed time up, slow it down, pause things, reverse time, and more. Can your cat do that? What do you mean ‘yes’?

Blinx almost became the mascot for the original Xbox, before some Master Chief fellow came along and stole the show. But I ask you, who would you prefer, John ‘Bland’ Chief, or Blinx the time vacuuming cat?

I rest my case.

So there you go, the ABSOLUTE BEST cats you’ll find in videogames. Have I missed any? Let me know on Facebook or Twitter, or in the comments section below!

Not included because frankly I don’t know what this is, is it a catbird, is it a birdog? Or is it a mix of all three, or none of them? Trico’s amazing though, and would’ve been included if I could work out just what percent cat it is!

Alright she doesn’t really have anything to do with games (she sits near the PS4 sometimes?) but LOOK HOW GOOD MY PARENTS CAT BUFFY IS. WHAT A CAT, WHAT. A. CAT.