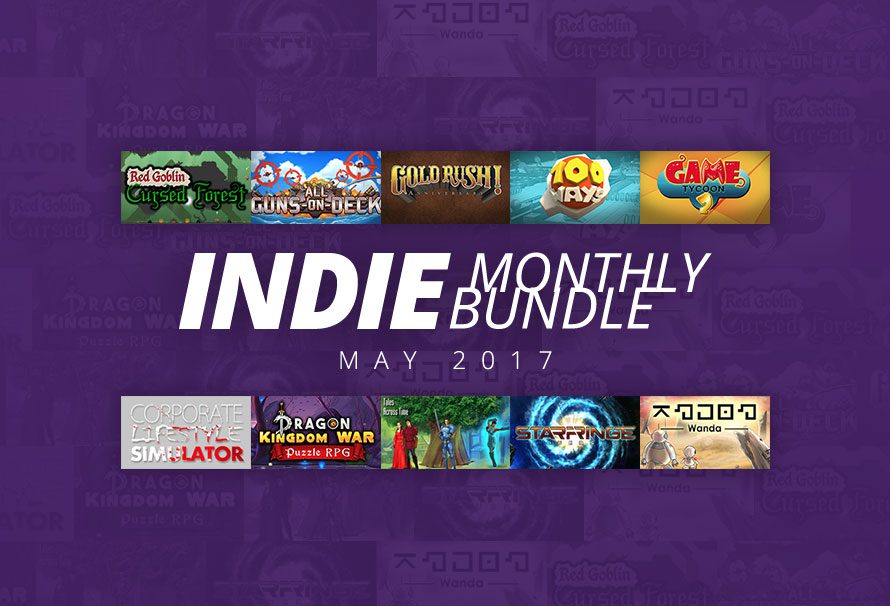 Played all of your AAA games to death and have nothing to play until the next release? Then we here at Green Man Gaming have got you covered with our monthly Indie Bundles. Here is what you get in May’s bundle so now is the perfect time to try a new title or two out!

Players control Red, a fire Goblin as he battles his way through the Dream Forest in this 2D side scrolling adventure game. As you progress through the levels and solve puzzles you will uncover the in depth story of Red and his master Aruto. Be warned though as this game does have quite a steep difficulty curve.

All Guns on Deck

This early access title puts you in charge of your own warship. It has been described as “a strategy, real time tactics action RPG, naval combat game” and supports a unique battle system which will have any aspiring sea captain engrossed for hours. The sea can be an unforgiving a cruel beast so it is best to be on the lookout!

The premise of this game is simple, get the ball from point A to point B over 100 challenging levels. The catch here is that there is not only 1 way but 100 ways to complete each level (just in case the games name didn’t give that away at all). This realtime 3D isometric puzzle game will have you engrossed for hours.

Game Tycoon 2 lets players jump into the shoes of a game developer as they try and develop the next greatest video game. Players will be thrown into the industry as an indie developer trying to make their way to the top. It’s a great little indie game that gives you a taste of what the games industry is like.

Back in the 80’s Gold Rush took the point and click genre by storm! Now it is back in full HD! You jump into the shoes of  Jerrod Wilson as he experiences the infamous 1849 Gold Rush that engulfed California. If you want just a taste of what Gold Rush fever was like back then, then this is the game for you.

If you though Walle was an awesome movie, then Wanda will be right up your street! You follow the story of 2 lonely robots as they explore a desolate and ruined world. What makes this indie title a cut above the rest is that the story is told without any dialogue and only through the subtle interactions between the 2 robots. There is also so mind bending puzzles thrown in as well.

In this RPG strategy game where players try to become the best summoner in the seven kingdoms (not to be confused with Westeros). Players can summon  dragons, werewolves, vampires and other amazing monsters through the us of cards. Collect the best cards and dominate your enemies in this epic RPG.

In this Early Access gem players get the opportunity to explore the starts for the first time as they embark on a journey to begin a global conquest to save mankind. Starfringe takes the basic idea of an RTS game and strips out things such as resource harvesting and units control. It implements a number of interesting ideas that unusual for RTS games. wWill you take the plunge into deep dark space?

A story driven RPG from the creators of 8-Bit Adventures: The Forgotten Journey. Tales Across time is a hark back to the RPG days of old where players embark on 3 separate quests, in the same location, spaced centuries apart. With a turn based battle system that focuses on recourse management and one on one encounters, Tales Across time is a great RPG for any fantasy game fan.

You can grab May’s indie bundle righter here! Also just an FYI, the full retail price for these games altogether is  £71.99. You can just grab all these games for just £1! Go Go Go!!