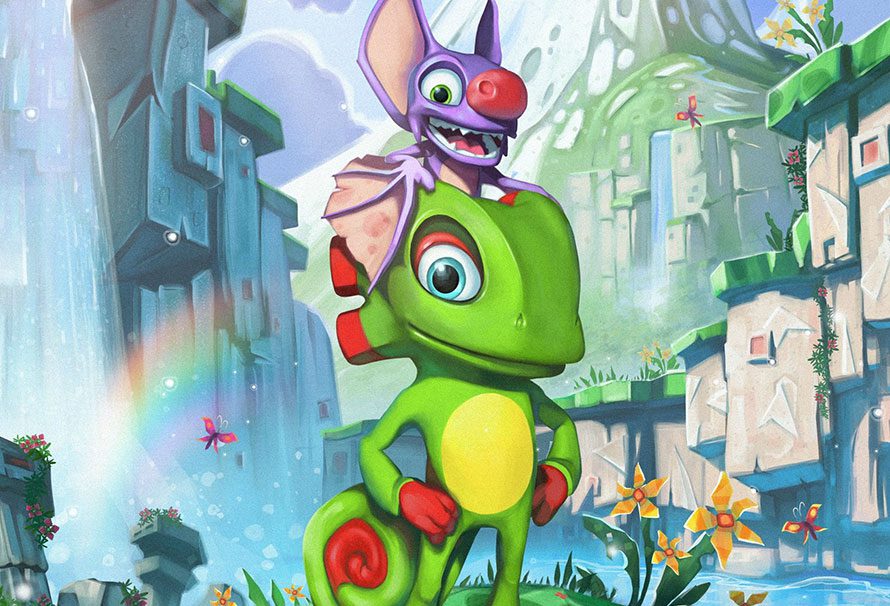 Here at Green Man Gaming we couldn’t be more excited for the release of Yooka-Laylee. We got the opportunity to sit down with Andy Robinson, Writer and Comms Director for Playtonic games to ask some questions about Yooka-Laylee and the revival of the 3D platformer genre.

1. Would you say Yooka-Laylee takes all of the best bits from classic rare ware games such as Conker’s Bad Fur Day and Banjo Kazooie?

Because of our original Kickstarter pitch, it was really important to us to capture the ‘look and feel’ of classic platformers, while continuing to innovate and bring core gameplay up to date. We’re evoking classic games with stuff like our oldschool UI, which intentionally uses a lot of custom 2D sprites instead of 3D models, and the iconic ‘gibberish’ character voices which our composer Grant Kirkhope and lead programmer Chris Sutherland have recreated after originally birthing them for Banjo-Kazooie.

But hopefully players will see that we’re not content trading on nostalgia: we’re doing lots of new things too. We wanted to push the open-world style of games like Banjo-Kazooie and Mario 64 even further, because the platformers you see today are often very linear. For example, we’ve put player choice at the core of features such as Trowzer’s moves, – which can be purchased in different orders – Tonics, – which allow players to modify gameplay to their own style – and expandable worlds, which empower players to explore environments at their own pace.

2. Do you think Yooka-Laylee is going to kick off the 3D Platformer revival?

I hope so, because we’re all fans of the genre and want to play more! From a studio point of view, more competition is really healthy for us as it means more players enjoying the platform genre and expanding the fan base!

3. Yooka and Laylee are probably the cutest characters in gaming to date. Why did you go with a Chameleon and a Bat as the main characters? Were there any other animals you tried out before hand?

Steve Mayles’ (character art director) initial idea for our main hero was a tiger, but he never got past the sketch phase. The tiger was deemed a bit too much of a ‘hero’ when Steve’s past characters like Banjo and Kazooie were more like underdogs. He even tried a witch and a broom with eyes at one point!

Ultimately we settled on the chameleon and bat because we felt that their innate abilities would make for naturally fun platforming gameplay. Laylee being a bat, for example, has a whole roster of sonar moves which she can use to stun enemies and smash objects. Yooka meanwhile, as a chameleon, can camouflage and sneak past enemies, plus he has a whole host of tongue moves such as the ability to eat objects and absorb their properties, or use his tongue as a grapple hook.

4. Besides Yooka and Laylee, who is your favourite character in the game and why?

There’s a signpost in the game called Planker. Unlike most video game signposts which usually provide helpful tips, Planker is a very grumpy bundle of wood who’s more likely to tell Yooka and Laylee to clear off and do something useful. For unknown reasons I feel a strong affinity for this character.

5. Would your recommend Kickstarter as a platform for game devs starting out on a new project?

There are lots of variables which determine if crowdfunding is right for a game or company. However, the barrier to trying crowdfunding is very low and it’s certainly worth a shot if a you feel that your game and model is a good fit!

Multiplayer modes for Yooka-Laylee were announced last week, you can check out the trailer below.

Yooka-Laylee releases on April 11 and is available to pre-purchase now from the Green Man Gaming Store.

5 Reasons Why We Love Yooka-Laylee