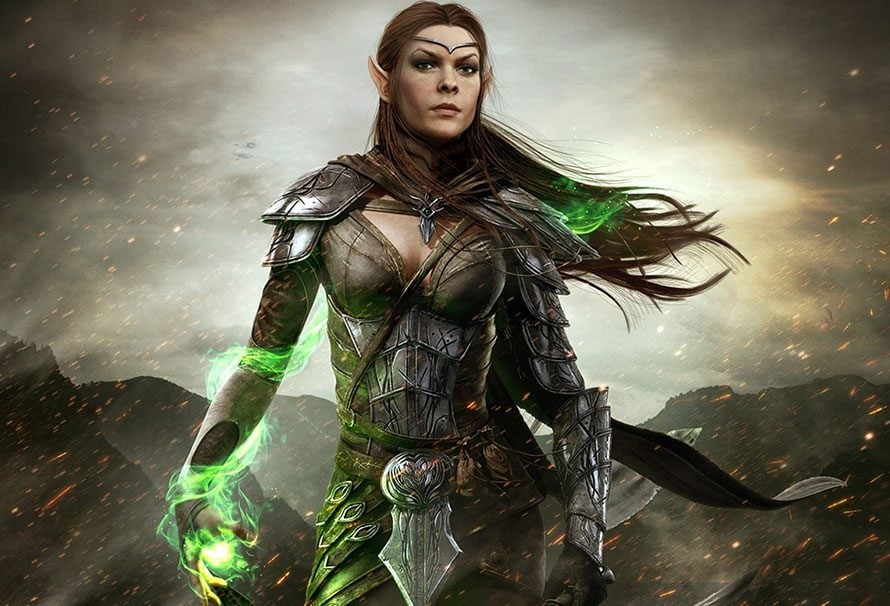 Having played quite a lot of it over the last few weeks, I thought it’d be good to put together a little beginner’s guide for the game, tackling some things that I had questions about and stuff I found useful!

The world of The Elder Scrolls Online isn’t like most other MMO worlds. It does have factions, three of them in fact, but outside of PvP it doesn’t matter too much. While it will determine your starting zone, with changes made to the game after launch, you can still party up with your friends, and you can teleport to their location to quest with them!

Race does affect more than you’d think though, but primarily (and this is an important point to remember with The Elder Scrolls Online), I’d recommend just going with whatever race you want to be!

Don’t worry about stats too much, though some races take to certain skills easier than others. For example, Redguards gain skill in single handed weapons faster than two-handed. It’s not massively important to keep this in mind if you just want to play the game and have fun, but if you want to maximise your time spent gaining skills it’s something to think about.

Races do have their own skills, so that’s something to check before creating your character, as you might want to make sure that your skills match up with what type of character you want to be!

The four classes basically fall into MMO roles but with some variation, for example a Dragon Knight can be a tank or a melee DPS, a Templar can be melee DPS, a healer, or a tank. The way that you decide what role you really want to take on is through the specialisations. So the class decides what archetypes you can be, whilst your specialisation decides what you are.

Skills are the core of The Elder Scrolls Online and affect everything from crafting to lockpicking to stealth to combat to armour. You gain expertise in these skills much like you would in any other Elder Scrolls game, by using them. There can be modifiers that speed this up as mentioned before, such as racial benefits.

So you’ve made your character, picked a truly epic name and headed out into the tutorial in Coldharbour.

Press V. Trust me on this.

The Elder Scrolls Online seems vastly easier if you play in third person mode. Like most MMOs, a lot of the combat revolves around placement. Where you’re stood, where enemies are, what attacks are coming your way. You’re going to want to shift your feet and see where you are in relation to things, and third person is the best way to do that.

K = Skills (useful for skilling up, and slotting things in your action bar)

Q = Quick Bar (set it up in your inventory and drop some potions in there, hold Q to switch between your items)

Z = Sheath/Unsheath weapon (Not useful really but c’mon, it’s nice to put your weapons away)

I’d also recommend activating both the FPS and Latency metres in the in-game options, they’ll put a little section in the corner of your screen that’ll let you know about performance, meaning you can tweak your settings if your FPS is too low, or go shout at a flatmate for hogging all the bandwidth if your latency is rising.

Now off you go and follow the tutorial, and we’ll see you on the other side! Remember to follow the instructions though, they will be handy!

Now you’re in the world and you’ve got a LOT of info coming at you at once.

They lead you from place to place in an ordered way, and if you want to explore the world it’ll lead you through the zones in a way that introduces you to places and themes, and even gets you some tasty achievements if you complete all the quests or achieve certain conditions.

Ignore Professions for a Bit

You can worry about this after you’ve got to your first big town. If you know what you want to be, I wanted to be a blacksmith, you can still pick stuff up and that won’t harm anything, but if you’re unsure just leave it for a bit. You can always catch up later, and you’ve got limited inventory space, both on yourself and in your bank!

There’s books all over the world in The Elder Scrolls Online. Now you might think ‘Alex, I don’t have time to read all these books, what are you thinking?’ and that’s fine! Maybe you don’t, but at least use them in-game. Some offer skill ups, and you won’t know until your character uses them.

Ignore Housing for a Bit

You’ll see player housing info when you get to your first big town, just ignore it for a while. It’ll cost more than you have, and the quest and achievements you have to fulfill before you get a house or room will probably take a while, so just get on with adventuring first!

These serve two purposes and are handily marked on maps. You’ll respawn there if you die and you don’t have a filled Soul Gem on you, so it’s important if you’re questing or adventuring that you have a local Wayshrine to respawn at. The other thing they do is let you teleport around the world, for a nominal cost. So if you want to fast travel, you’ll need to have a Wayshrine activated near where you want to go! Once you do, just open the map, click it, and pay the cost and off you go!

No not a guild with other real people, although I’d recommend doing that too (as long as they’re nice people), but join a guild like the Fighters Guild or the Mages Guild. Not only do these offer quests and rewards unique to them, but they have skills you might need and can unlock. Persuade/Intimidate are two of these and can help in certain quests to get NPCs to do what you want them to do.

When you get to your first big town, you can do crafting certifications which then unlock daily quests you can do for each profession. This is a good point to pick up a profession, because not only do these daily quests give you resources, skills, and a bit of money, but the certification quests also give you a an introduction to crafting which is essential! Ignore your professions NO LONGER!

You’ll see lots of players sweeping past you on mounts, and you’ll be filled with envy. Well don’t worry, it’s not too hard to get a mount, but you will need to save up a bit. What can help pass the time is visiting stable masters daily to skill up in regards to riding, increasing how much you can carry, how fast you go etc. You can only do this once a day and it does cost a little bit of cash, but it’s well worth it!

Your bank is finite, but essential. You’re going to be picking up a LOT of stuff, and the bank is a great place to store it. You can also store ingredients and materials for your crafting there and they’ll automatically be used when crafting. But be warned, it’s going to run out of space, so make sure to sell stuff regularly!

Options do exist, though turned off by default, for player/NPC names to be shown and health bars to be visible at all times. So don’t worry if you can’t distinguish between friend and foe with ease, you can fiddle with the settings to your heart’s content!

Run at Big Lights in the Sky

You might see circles of lightning in the sky. Dark Anchors, or Dolmens, are co-operative events that occur around the map where the force of Molag Bal try to anchor on the world to pull it into Coldharbour. Run at them! It’ll be a little co-op event where you battle some daedra, fight them off, break the anchor, and get some rewards. Nice!

This is most essential, I can’t tell you how to play, and if anyone tries tell them to go away. You be you, and have fun!

If we missed anything or you have any tips, let us know on our Community!

Bethesda at E3 2019: Roundup from the Conference

Things to Look Forward to at QuakeCon 2018