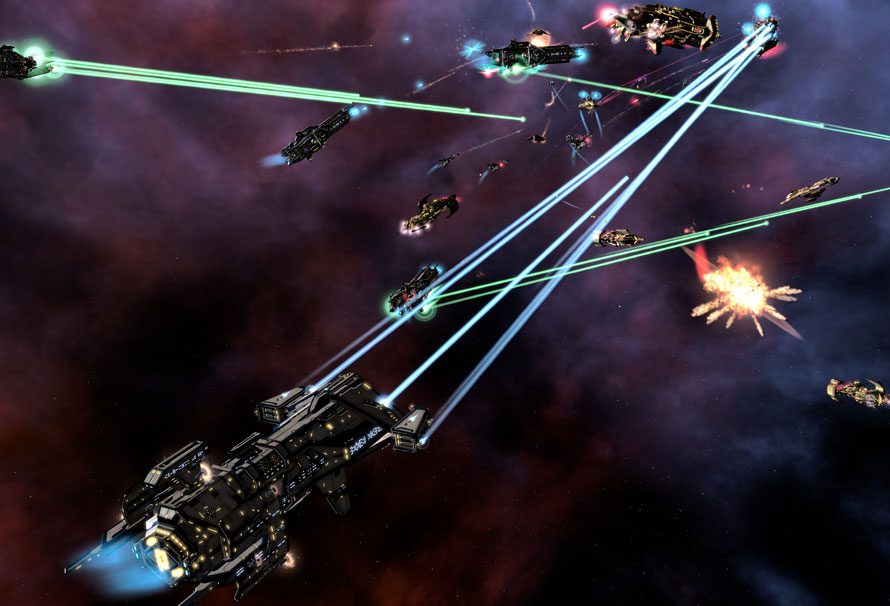 But WHAT are the best Galactic Civilizations in history, or at least in fictional history? Well HERE WE GO

It’s you! The Precursor shield has fallen and it’s time to take the Terran Alliance on the Terran Crusade, starting from a single planet and eventually (hopefully) spanning the entire galaxy, the Terran Alliance represents the hopes and dreams for a better future for not only the humans that make up the alliance, but for all races. Galactic Civilizations III takes you on a crusade to end the oppression of the brutal Drengin Empire and spread your wings across the known universe!

They’re space faring cats, what more do you need to know about them? OK they’re space faring WAR LOVING cats, love them yet? The main antagonists of the first three Wing Commander games, you eventually see them off with a hearty bomb to the planet-face. We’d also recommend trusting them, as they’ll never turn against you. Never, OK? Honest! Look you might regret it, maybe a bit. But it’s alright, they’re awesome fighty space cats!

Aliens that mysteriously turned from grey-alien-type-things into snakes that steal your body in between the film and the tv series, they’re brilliant at pretending to be Egyptians across the entire galaxy. Less good at pretending to be other ancient civilisations, but they’ve got the Egyptian bit down pat. They’re also quite good at dispersing the human race throughout the galaxy and using them for slave labour, but that’s not really something to be proud of. We thought about including the Ori here, but frankly they’re just big floaty god-like things, not cool snake folk. The Goa’uld get the Green Man Gaming Fake Egyptians in Space Award.

They might not be a truly Galactic Civilization at the start of the game, but by the end, if you play your cards right, you’ll have a galaxy-spanning rock civilization! OK they can be a little grumpy, making diplomacy a little hard, but at their centre is a creamy rock heart that’s just waiting to be loved. Able to live on any planet because they’re rocks, they’ll soon be taking over the universe in your name.

Also worth including here because if you choose to be them, you get the beautiful sight of a scientist and a spy made of stone. Excellent.

They’ll say they’re not a Galactic Civilization, merely just a loose coalition of aligned worlds, but really who are they fooling? They’re clearly an empire, just an empire with better PR. They turn up on your doorstep, all smiles and Prime Directives, and before you know it you’re just another member planet with a tiny seat at the Federation Council. Look at what happened to Bajor! Well, alright, we can’t because DS9 ended. But look at what COULD’VE happened to Bajor!

That said, their space ships are beautiful. That’s all that really matters.

An actual empire that uses the name! The Galactic Empire is a friendly place despite the name, and they’d just love to welcome your planet to their fold, and if they send a few thousand Stormtroopers in to deal with any Force sensitive users you might have about the place, then so be it. Defeated by the dastardly Rebel Alliance, we’re at least seeing a resurgence thanks to the First Order.

If nothing else, The Galactic Empire really cornered the market on British accents and FASHION.

Whilst species in Stellaris are randomised, our Community Manager Olly is currently having a terrible time dealing with a race he describes as ‘Militant Sloth Dictators’. The first race he encountered who weren’t already long dead, they proceeded to blow apart his trade deals, snub him at every turn, and basically tell the universe that they hated him. Now if you’ve met Olly, that’s quite a hard thing to do! But they managed it anyway. The lesson here, never trust a Sloth Person, even if they use the Mammalian Normal #6 portrait.

Not much is known about The Alliance from the Firefly universe, except they’re massive space gits who keep an iron grip on the planetary system where Firefly is set. They tend to like messing with your brain too, if River Tam is anything to go by. Don’t annoy them or steal whatever they consider as their property, as they’ll send agents with blue hands after you, or maybe a softly spoken Operative, and almost nothing will stop them from coming for you. If you get the chance, why not ask them about the Reavers? They love to be asked about them.

We’ll just stand waaaaay over here while you do.

You want some alien religious zealots? Then the Covenant are here for you. They sort of believe that the Halo rings are a bit holy as they were created by their holy Forerunners, and woe betide you if you step on them. Eager to add any new races to their empire (apart from humans), they’ll just demand a few little things, like y’know, that you worship their gods and pledge eternal allegiance to them. Such little things to ask! If you do sign up, you just get a *little* bit enslaved and your entire culture gets a *little* bit destroyed. A small price to pay for…er…something!

So nice they almost make the Federation look like warmongers, The Culture appear in a series of books written by Iain M. Banks. They’re a very permissive society run by super-intelligent AIs called Minds, this permissiveness being a point of conflict with some of the more rigid societies they come up against. But don’t take their permissiveness as weakness, as many wars have been fought with The Culture and they’ve come out on top every time. They even have a secret group called Special Circumstances who neutralise threats before they become threats, so whilst the average Culture citizen may have a lovely time and be blissfully aware of the darker undercurrents to Culture society, there are fangs and teeth just beneath the surface.

Oh and be prepared to run if you ever, ever come across anyone with the last name of Zakalwe.

Have we missed your favourite? Let us know on social media, or in the comments below!