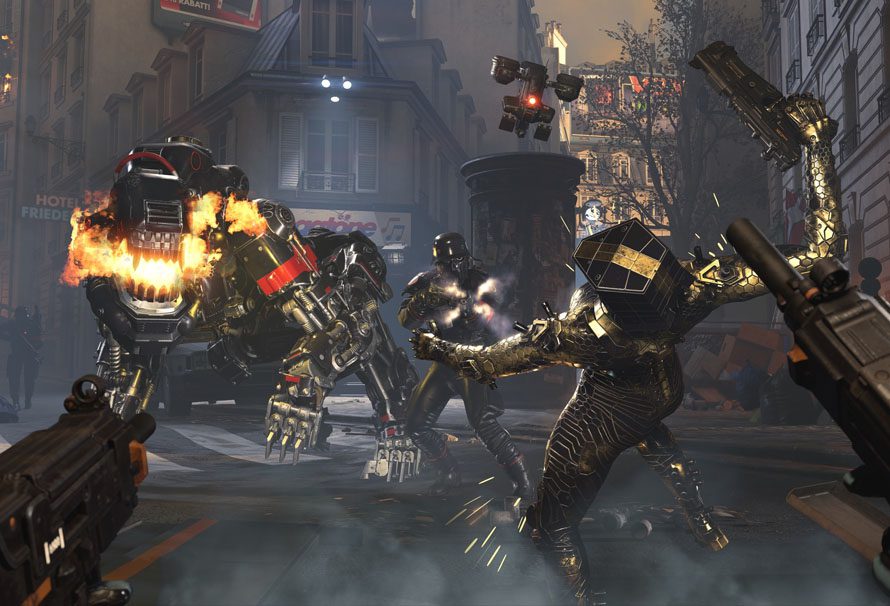 Wolfenstein: Youngblood is on the cusp of release, meaning for the first time a fully co-op adventure in the Wolfenstein series will be unleashed on the world. A direct sequel to 2017’s The New Colossus, Youngblood will see you take on the roles of B.J. Blazkowicz’ daughters as they try to rescue him from the evil Nazis.

No doubt it’ll be an absolute romp, filled with the trademark actioni, stealth, and craziness that the Wolfenstein series has become known for. We thought it was the perfect time to look back over the series at some of the most ridiculous moments in Wolfenstein history.

Spoilers: Below here you’ll find spoilers for, well, all the Wolfenstein games..

The original Wolfenstein game was a pretty straitlaced top-down action stealth game. But that wasn’t enough for the budding series’ fans. Castle Smurfenstein is one of the very first art replacement mods, which saw all the Nazis replaced with smurfs.

The first Wolfenstein game in years kicked off with a time skip of 14 years. This let The New Order show the world that it wasn’t afraid to mix things up in a major way.

Wolfenstein RPG Existing at all

A Wolfenstein RPG? On mobile? Yep, it’s real, and it’s fairly good. Playing like a Nazi-filled dungeon crawler, its very existence is a testament to the nuttiness of the late 2000s/

We know escaping from Castle Wolfenstein must make you desperate, but in Wolfenstein 3D it made B.J. Blazkowicz so desperate he stooped to eating dog food. Poor Bill.

In 2017’s The New Colossus, Hitler turns up in a state of advanced age and extreme incontinence. Seeing an aged person be confused and urinating freely would normally be a moment for sympathy but it’s Hitler. Good.

Return to Castle Wolfenstein saw zombies and spirits take to the battlefield, all to be mown down by the guns of our friend B.J., of course.

Remember when B.J. had magic powers thanks to a medallion? MachineGames do, as 2009’s underwhelming Wolfenstein reboot is still canon. Facing off against the Nazis, of course, B.J. finds a medallion that imbues him with all kinds of magical powers. Just wish he’d kept hold of it. But it’s ok, because before long he got the…

In The New Order B.J. teams up with a scholar who knows of the ancient Jewish sect, the Da’at Yichud. Impossibly ancient and impossibly advanced, they created wonders at the beginning of time. B.J. eventually gets his hands on their Power Suit, a suit that gives him, well, powers. And a snazzy hat.

Speaking of hats, B.J. wouldn’t need one anymore after The New Colossus, as he loses his head quite literally after an execution. But it’s ok because his friends grabbed it before it hit the floor and stuck it on a new body. Isn’t that nice for him.

Wolfenstein 3D ends with one of the most famous boss fights of all time, Mecha-Hitler. It’s Hitler in a mech suit. He has twin chainguns and a racist brain, and it’s up to you to put him down for good. Needless to say, you do, and the world is better for it.