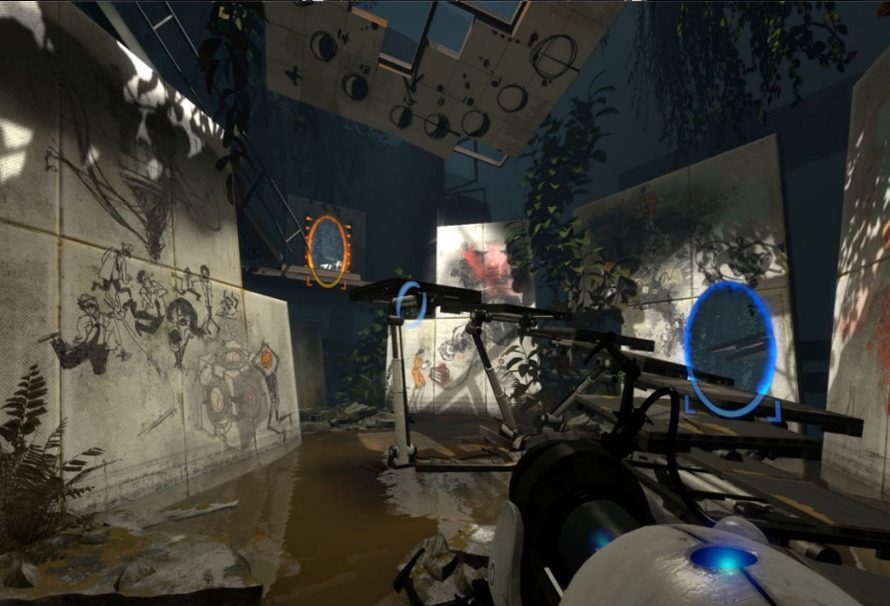 Heralded as one of the best if not THE best first person puzzle game of all time (with Portal 1 a close second or on par, that’s up to your own personal opinion) Portal is one of the best games to date. So if you haven’t played it then we strongly suggest you grab a copy right now and get playing, Here’s why.

In short, Portal 2’s cast of characters is amazing. GLaDOS with her dark sense of humour and dedication to the Enrichment cCentre and Wheatley with his seemingly innocent outlook on life and clumsy persona make the Portal world a joy to behold. It’s not all about GLaDOS and Wheatley however as there are some other great characters such as Cave Johnson, Atlas and Peabody (who we will talk about later) and even GLaDOS’ personality cores. You will also probably end up even having a soft spot for the turrets dotted around each puzzle room to fill you full of bullets.

The puzzles you are given to solve throughout the course of Portal 2 are pretty challenging. You will more often than not find yourself bamboozled by some of the tasks ahead of you. But once you have completed them the wave of satisfaction you get is pretty great. The puzzle design starts off relatively simple so you can get used to the puzzles but soon ramps up by adding new obstacles, gadgets and tasks for you to complete. It is only you and your trusty Portal gun against what GLaDOS, the Enrichment Centre and other characters have in store for you.

Portal 2’s main selling point is portals. Armed with your trusty Aperture Science Handheld Portal Device your mission is to solve a variety of puzzles using portals. Portals can be used to move objects, move yourself and even hurl you at great speeds in order to solve puzzles. Just remember, ‘speedy thing goes in, speedy thing comes out’.

Like me you will probably have hours of fun playing with the portals and not completing the puzzles.

The first Portal game laid the ground work for the portal technology and told a simple story of human vs machine. Portal 2 however takes the idea a step further and throws you into a story of how GLaDOS came to be, why the Enrichment Centre exists and the history of Aperture Science. It is a really good story with some great plot twists thrown in as well. The great thing here is that you don’t necessarily have to play the first game in order to get what is happening. We do however suggest you give the first game a go anyway as it is still pretty brilliant.

Even though the main story campaign in Portal 2 is single player, there is a great co-op multiplayer campaign to play through as well. Players take the role of Atlas and Peabody, two Aperture Science droids who are tasked with taking part in the Aperture Science Cooperative Testing Initiative. Players are led by a GLaDOS through a shiny new Enrichment Centre and have to solve puzzles using four portals instead of the standard two. It is a great co op campaign and more often than not you will find yourself giggling insanely as you drop your partner into various hazards such as lava, lasers and a flurry of armed turrets. This doesn’t help the progress of the campaign mode but is still fun to do.

These are the main reasons why we think you should play Portal 2 (if you haven’t already) and be sure to grab you copy from the Green Man Gaming store. If you have played the game, let us know what you think of it in the comment section below.

Top 10 Games To Grab In The GMG Winter Sale

Top 10 Games You Should Get In The Green Man Gaming Sale.