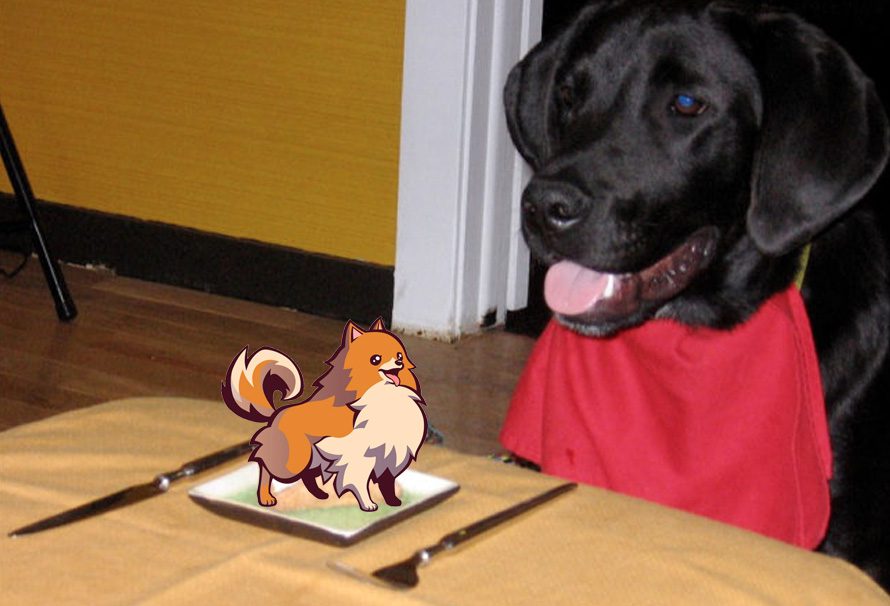 Dogs are four legged creatures full of love and joy and everything good. It’s no surprise that our furry friends have been a mainstay of videogames almost from inception, so in honour of Take your Dog to Work Day, we’re looking back over the history of videogames and we’re going to call out the absolute best puppers, pupperinos, and pupsters in videogames.

Strap your collar on, this’ll be a bark-filled ride.

Dogmeat’s been in every single main series Fallout game since the first one. Appearing as a reference to Mad Max, he joins you after noticing that you wear a leather jacket with one arm, just like Dogmeat’s former master. In the second game Dogmeat appears as an Easter Egg in the Cafe of Broken Dreams (but the chances of ending up there are pretty much 100%), but in Fallout 3 and 4 Dogmeat takes more prominence, helping you find out what the heck happened to your son in the fourth instalment.

Known for being, shall we say ‘inconsistent’ in combat usefulness, and even having a canon death in the original Fallout due to ‘walking into-laser-walls-itis’, Dogmeat has risen above all this to become a series regular and poster-child for post-apocalyptic-pupperinos.

One eyed but armed with a full and rich smile, D-Dog joins Snake and the Diamond Dogs and grows from a tiny child-dog to a roaring defender of Snake. Able to be customised and fitted out with the top dog fashions and equipped with the latest in ‘biting people’ technology, D-Dog’s one of the most useful companions in Metal Gear Solid V.

Also D-Dog doesn’t shit in the road like D-Horse, so that’s good.

There are few dogs in games as powerful as the Barkspawn from Dragon Age: Origins. Accompanying you on your adventures across Thedas, the Barkspawn is a strong and wise companion full of rich and powerful muscle. If you want some darkspawn ripped in half, Barkspawn is your dog.

Barkspawn also specialises in wonderful happy noises if give them a bone or some delicious attention. Try not to have your heart warmed in camp, I dare you.

This is the game that taught us one important and salient fact about Pomeranians: they can fuck up a lion.

You might look at a little puffy Pom and think ‘what a beautiful cloud of a creature’, but no, they’re actually savage lion-murderers who will stop at nothing to feed, breed, and take down anything in their way.

They’re just waiting for humanity to decline, and once we’re gone the wild streets of the world are theirs. Cross Poms are your peril.

No-one really knew what to expect from the Mad Max game from Avalanche, but what we got was a mechanically exciting and utterly beautiful open world car smashing adventure.

But more than that, Mad Max features one of the best dogs in videogame history. Dinky Di joins you early on, and helps you find water to stay alive, going on to stick with you throughout the game. Helping you find mines and also just to bark gleefully from the back of a car, Dinky Di is a breath of fresh air in the misery-filled wasteland that is post-apocalyptic Australia.

Angelo, or rather Sant’ Angelo di Roma to give her their full name, is Rinoa’s pet dog from Final Fantasy VIII. She accompanies you throughout the game, and also helps out mid-battle with a range of stunning and brutal attacks. Well they’re not that brutal, but it’s brilliant anyway to see Angelo bark her way onto the screen to take out some enemies.

Even though Angelo might not be a tide-turner in battle, she makes every fight where she appears much better, and you too can help by shouting out ‘Angelooooooo’ when she runs on screen. Top pup.

The general of the Cornerian Army, this is a dog with  responsibility. Your dog might be good at getting the paper, rolling over, playing dead, but can your dog guide a system-spanning space armada?

Well to be honest you probably haven’t tried it out, maybe if you gave them more responsibility they’d pick up the slack and help out more.

Anyway General Pepper helps protect the Lylat System from outsider invaders, and does so even though in the end it costs him his health. Rest well General Pepper, you earned it.

The second Pomeranian on this list, Missile belongs to Kamila and is based on the real-life Missile, a Pom owned by Ghost Trick writer Shu Takumi. Like many videogame dogs, Missile isn’t just a dog, he’s able to possess objects, talk to other ghosts, swap object locations, and rewind time.

But the most important thing about Missile is that he’s absolutely the cutest and most wonderful cartoon Pom on the planet. Wow, what a dog.

If you’re wanting some hot tunes, K.K. Slider is your pup. Working as a musician, they play their guitar and just want you to chill out and listen to some tunes. Why not take a load off, put your feet up, and fill your ears with some top guitar music.

Whilst not technically a dog, Barbas the daedra at least looks like a dog and acts in that role for their master, Clavicus Vile. Whilst he’s a shapeshifter and can take on any form, you’ll find them most often in dog form at their masters heel.

Throughout The Elder Scrolls games you’ll find Barbas wanting to please their master, from trying to invade the Clockwork City in The Elder Scrolls Online: Morrowind to just trying to be reunited with Clavicus Vile in Skyrim. Barbas is a funny ol’ creature who seems to be looked down on by most of the House of Troubles, but that won’t top them wanting to do their best for their daedra lord.

That’s all the dogs we’ve got time for, have we missed your favourite? Let us know in the comments. Or if you want to share some dog pics, always feel free to do that too.