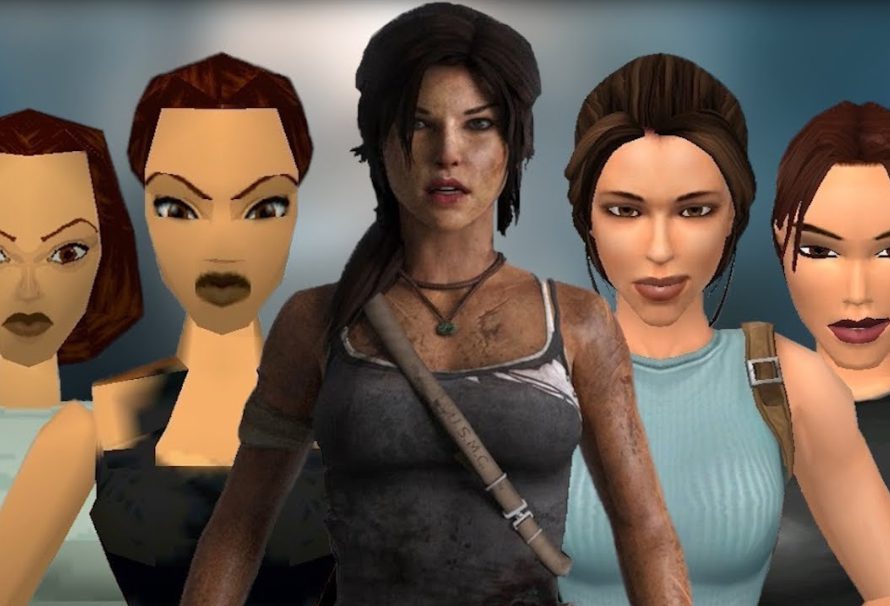 Archaeology may not be everyone’s idea of a good time, but don’t let Lara Croft hear you say that. She may not dig trenches or give lectures, but Lara’s contribution to video gaming history is unquestionable.

Tomb Raider is the product of an ancient, forgotten era, but its latest trilogy and 2018’s Tomb Raider movie show that it can remain relevant in the modern-day.

So read on as we uncover the rich history of Tomb Raider, layer by layer, to extrapolate its future.

Few games are lucky enough to be era-defining, but the first Tomb Raider is one of them.

First released in 1996, Tomb Raider gained immediate attention. It was a thinking man’s action game, mixing platforming and puzzle-solving with acrobatic gunfights and moody ambience. Released on the Sega Saturn, Playstation, and MS-DOS, it reached a wide audience and soon became the kind of household name that even clueless, non-gamer parents could recognise.

Heroine Lara Croft was one of the first true celebrities born from the gaming medium. Plenty of mascots preceded her, but few if any of them were well-rounded characters who actually looked (at least something) like a real person. Lara Croft was relatable, and she grew to become an icon synonymous with gaming as a whole.

Tomb Raider II was the successful follow-up to the 1996 adventure. But as the Playstation era progressed, Tomb Raider settled into a yearly release cycle, reaching its fifth entry on its home generation of consoles while comparable franchises like Resident Evil and Metal Gear Solid were still on their earliest iterations.

Despite consistent performance over time, this strategy soon caught up with the franchise. A lack of innovation became apparent and interest waned. A fumbled transition to the next generation in the form of Tomb Raider VI: The Angel of Darkness robbed the franchise of its remaining momentum.

Tomb Raider made its cinematic debut at a strange time for the series—long after its initial momentum had worn off but before its first reboot. Nonetheless, Lara Croft: Tomb Raider, released in 2001, launched Angelina Jolie’s career to new heights and ensured the Tomb Raider brand remained a household name.

Rebirth of a Legend

By 2006, Tomb Raider was in a rut. It was time to push the big red REBOOT button.

For 2006’s Tomb Raider: Legend, publisher Eidos transferred development to Crystal Dynamics, the studio behind the popular Legacy of Kain franchise. The team went back to basics by bringing Lara Croft creator Toby Gard on board. Gard had left the series in response to creative restrictions he experienced after the success of the first Tomb Raider.

Legend proved a successful revival of the series. It blew the settling dust off the franchise, revamping its control scheme and refocusing the franchise on ancient tombs and ruins after the city-themed adventures of The Angel of Darkness.

This relaunch was successful enough to spawn two follow-ups. The first was a remake of the original Tomb Raider, dubbed Tomb Raider: Anniversary. This updated the original with gameplay features from the Legend series and revised its continuity somewhat to slot into the new canon.

Finally, Tomb Raider: Underworld launched in 2008 as a true sequel to Legend. As a game, it was well-received, but scores ranged from the mostly-positive to lukewarm thanks to bugs and other issues on some platforms.

After 2008, the main franchise went silent except for an HD version of this collected trilogy. Work began on a rebooted franchise soon after Underworld’s release, but this wouldn’t appear on the release calendar until 2013.

Let’s take some time out here to cover some other events in Lara’s busy life.

2010’s Lara Croft and the Guardian of Light ditched the Tomb Raider brand and took Lara in a new, co-op direction, with isometric, arcade-style gameplay. This new Lara Croft series developed further with both a direct sequel, using the same gameplay template, and Relic Run, an endless runner.

These spin-offs represent a first for the Tomb Raider series. Alongside 2013’s rebooted series, they’re the first time that two Tomb Raider game continuities (and two different versions of Lara Croft) have been active simultaneously.

Another Rise of the Tomb Raider

The 2010s have proved to be the decade of triumphant reboots, thanks to a cresting wave of Millennial nostalgia. In 2013, Tomb Raider joined the likes of Star Wars and Jurassic World in the 90s do-over.

In the grand tradition of gritty reboots, Tomb Raider made its comeback as a stripped-down, grounded take on the franchise—at least in some respects.

With a script by Rhianna Pratchett, Tomb Raider 2013 focused on building Lara Croft as a person, starting with her first forays into the aggressive, Indiana Jones school of archaeology. It had mixed success on this front thanks to a dose of gameplay and story segregation. Lara’s transition from wringing her hands over killing a deer to an endless slaughter of faceless human mooks has inspired a fountain of memes.

Even so, it presented a new Lara Croft. More fallible, human, and, for that matter, more realistically proportioned. The game received critical acclaim and was well-received by long-term fans.

Look On My Works Ye Mighty

It’s hard to argue that the Tomb Raider franchise has the clout it once did. Like a post-imperial country, Lara’s territory has shrunk, but her long and proud history has saved her from complete collapse. Her culture has influenced an entire generation of rising powers.

From its meteoric heights, Tomb Raider has found a comfortable middle rung in the gaming world. It’s no longer a best-in-class, nor is it the hot event of the gaming calendar. It has even formed a feedback loop with the kind of games it once influenced, borrowing more often than it inspires.

But these aren’t bad things, necessarily. They have kept Tomb Raider relevant, saving it from the sands of time. The 2018 release of a rebooted Tomb Raider movie franchise makes that clear.

Lara Croft inspired an entire generation of gamers and the games they went on to develop. The Uncharted franchise and its lead Nathan Drake have become almost as iconic, drawing from that same Indiana Jones-inspired well, inviting obvious comparisons to Tomb Raider.

The action-adventure genre as a whole once looked to Tomb Raider as a template and the Tomb Raiding ethos persists in everything from Uncharted to Star Wars Jedi: Fallen Order. Lara’s fierce explorer’s spirit echoes in characters like Horizon: Zero Dawn’s Aloy and her world of questionable archaeology and ancient aliens calls franchises like Assassin’s Creed to mind.

The influence of Tomb Raider has been subtle yet powerful. While few games invoke Tomb Raider as a direct blueprint, the series had an unquestionable influence on the Millennial generation of game developers who are now in their prime.

Crystal Dynamics is playing coy about where the Tomb Raider franchise will go next. Indications are that the reboot trilogy has concluded for now. The developers have described this as an origin story of sorts for Lara Croft, so perhaps the next adventure will see her more seasoned, at the peak of her career.

Whatever the case, Lara’s loyal fanbase is sure to follow, and the icon shows no signs of retiring to her manor yet.