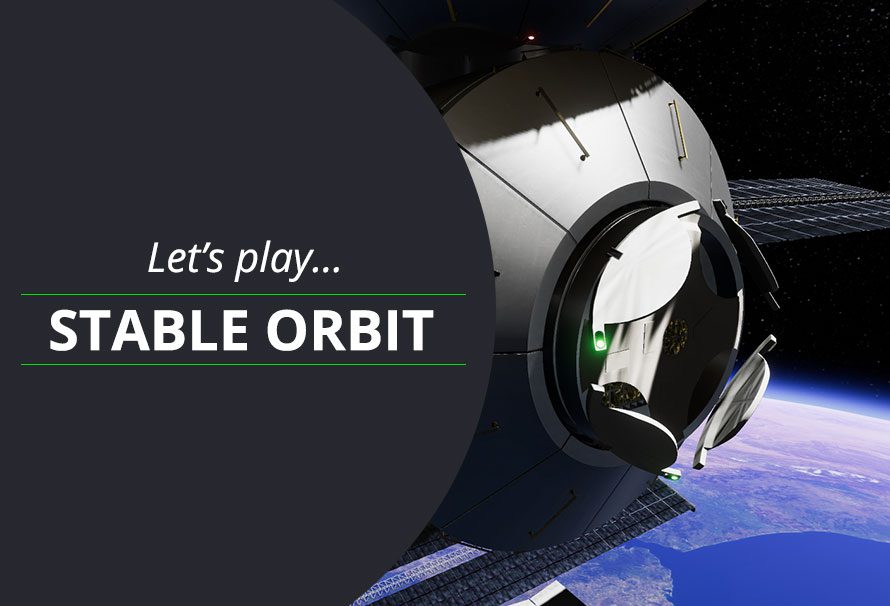 To celebrate the Vector Update, this week Alex is playing Stable Orbit. Check out his lets play video below.

As is tradition with Green Man Gaming let’s play videos we took some time to as Alex some questions, check them out below.

Did you enjoy creating your very own space station?

Yes, it was a lot of fun! When I realised I had made a serious mistake with the design of my station I had no problem with starting again from scratch, as it’s enjoyable even from the earliest stages.

There doesn’t seem to be a tutorial, how intuitive is the game?

I feel the game works pretty well without a tutorial. I wouldn’t exactly say that the game is intuitive, but part of the fun is figuring out for yourself which order you wish to place your first modules and components. If the game held your hand and said “now you should build an oxygen generator,” “now let’s build a radiator to prevent overheating” then it might lose something.

It’s fun to build a station and then discover that you’ve got power shortages, or lack of air or water, or something’s not working due to overheating, and then scrambling to try and fix it. It’s trial and error, but it is rewarding, as you discover unanticipated problems and then go “Ah, of course!” and figure out how to solve them. Eventually you figure out the best order to build things, so that you have a well-functioning station with a happy crew doing lots of money-generating science.

That said, I guess that someone might have some difficulty if they don’t realise some of the basics at the start. For instance, that you build modules by clicking on the connector you wish to attach it to, or that you need to have a lab (and crew working in that lab) to generate money. It might be helpful to have some kind of hint text regarding those basic gameplay elements. Once you have that essential knowledge, I feel the game works pretty well without a tutorial.

As the game is in Early Access, what do you think the game needs to improve upon?

More things to do once you’ve got a well-operating station. At the moment, once you’ve figured out the early stages, you can expand your station bigger and bigger by building more science labs to generate more money. However I know that in future updates science labs will no longer automatically generate money, instead your crew will need to complete particular pieces of research. So there will be that decision-making regarding which science contracts to go for, what experiments to do, you’ll have to manage the activities of the crew more. There’s also going to be features like needing to adjust the orbit of the station – it’s in the name of the game, you’ll have to make sure everything’s working correctly to stay in a stable orbit! There’s even going to be random disasters to deal with, like being hit by space debris or a meteorite. I feel all these features will add a lot of depth to the later parts of the game.

Would you ever go to space yourself?

Definitely. I’m sure I’d be nervous or even find it quite frightening, also the training would probably be quite gruelling… but it would also be too unique and interesting an experience to miss out on. Plus as a life-long science fiction fan who grew up loving shows about space travel, I’d feel that I’d really owe it my 8-year-old self. 8-year-old me would never forgive me if I passed on a chance to go into space.

Stable Orbit is available now, we are also giving away 1 of 5 copies of the game.