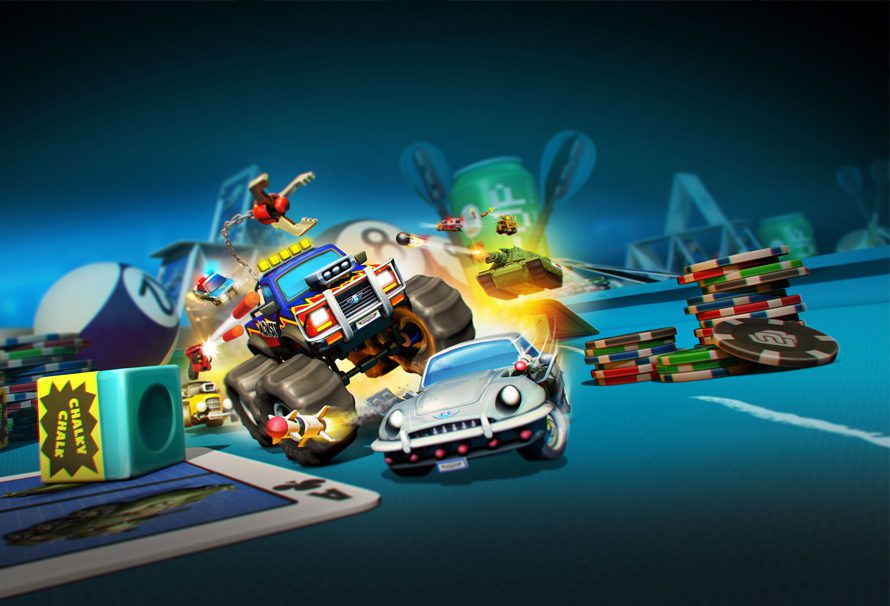 Well you’re in luck as Micro Machines World Tour is out next week, and here is what you can expect from the next game in the series.

The thing that Micro Machines is most famous for is the tiny cars that the players get to drive. These cars are able to go around a whole manner of different tracks, they are also able to wield a plethora of different weapons in order to foil their opponents.

In World Series, the Micro Machines you have come to love are back in full force. There hasn’t been an official list of cars released as yet but we can expect futuristic cars, police cars, ambulances, diggers, monster trucks the list goes on.

As previously stated these tiny cars are able to wield some devastating weapons, such as missiles, flame throwers, bombs, lasers, comedy hammers and even black holes. These weapons can easily wreak havoc and turn the tides of tiny car battles.

As these vehicles are miniature, the environments they are able to navigate round are plentiful. There will be tracks and arenas set in kitchens, workshops, gardens, on pool tables and even on a hungry hungry hippos game board. Each level will come with its own hazards and obstacles for players to avoid which are uniquely themed to the level.

There will be a few different game modes for players to choose from. Even though we haven’t got official confirmation on how many game modes there will be, the trailers have given us a glimpse into what modes we can expect. There will be a battle mode where players will use weapons in order to be the last Micro Machine standing. There is also a capture the flag mode and a standard race mode which all look like great fun.

You can’t have a Micro Machines without multiplayer. World Series has 4 player local multiplayer and up to 12 players online. This is the perfect game to challenge your friends at and prove that you are the best tiny car driver out there.

This is probably the most loyal Micro Machines game the series has had since the good old days. The cars bounce around like they used to when someone wins and the camera is in the classic top down view. The only thing it really is missing is the ability to share one controller between 2 people much like you were able to in Micro Machines Turbo 64.

Codemasters have recruited Brian Blessed as the games announcer. Need I say more? Lets just hope we get a Flash Gordon quote or two in there for good measure.

Micro Machines World Series is available for pre-purchase from the Green Man Gaming store right now. The game is due out on the 30th June 2017.