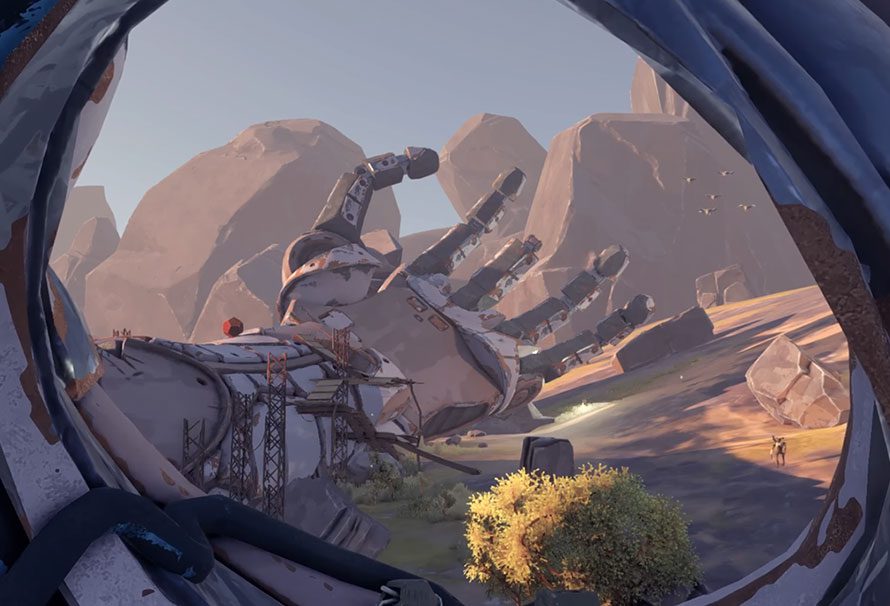 I stood on an alien planet, my robot legs thumping the soil beneath me as my mechanical avatar crunched its way up a hillside. Overhead a flock of birds took flight and I stood for a moment, listening to the wind rustle the grass under alien skies. On that peaceful alien hillside I forgot for a moment that I was at Rezzed in London; in my mind I was on the planet of Tölva.

Then I got out my gun and shot a whole heck load of robots.

The Signal from Tölva is the latest game from Big Robot, whose previous game Sir! You are Being Hunted was a terrifying procedurally generated stealth game, with you being hunted down by a British robot posse.

The Signal from Tölva returns to robots, but this time you have a little bit more power to even the odds. Gone are the days of scurrying from bush to bush hoping that a nearby robot dog doesn’t sniff you out, now you have GUNS. And FRIENDS.

Right so a bit of backstory. The game starts with you finding out that there’s a signal coming from the planet Tölva. You head down to the planet by taking control of robots and inhabiting their bodies as you scurry about trying to find where the signal is coming from, and what the signal is. This means that if you die, it’s only your robot body that dies and you’ll immediately take control of an identical one, back at one of the bases or beacons you’ve captured and turned to your will.

The first thing you’ll notice about The Signal from Tölva (I’m getting really good at typing ö now) is that it’s utterly stunning to look at, it has a really strong art style which is influenced by renowned artist Ian McQue and this shines throughout the whole game. You know how Half Life 2 and Dishonored still look good a few years later? Signal from Tölva has that same kind of sense that it’ll be future proofed due to how clear its visual identity is. I chatted with Big Robot co-founder Jim Rossignol for a while about the game, and frankly I think I might’ve embarrassed myself with gushing over how good the game looks. Oh well.

I was really surprised to see a bit of wildlife on Tölva, there were flocks of alien birds flapping about high in the sky and that really helped sell the world as a ‘world’, not just as a background for game mechanics. What also helps sell that is that the other robots on the planet all have their own factions, identities, and tasks in that world.

Say you see a bandit spaceship that’s set down and unloaded some bandit robots. You can spy them from afar as they go about their business and if you use your binocular vision to zoom in on them, not only do they get tagged a-la Far Cry, but you get a bit of info about who they are, what faction they belong to, and what they’re up to. This ties into something that Jim mentioned during our chat, that feeling of not necessarily being the centre of the universe in a game. The world existed before you and might well exist after you, and you’re just one part of it instead of the ‘chosen one’ the whole world has been holding its breath for.

The combat felt absolutely right, the guns felt like guns, even though they might be firing lasers. They had a weight and an oomph that made it really feel like I was punching holes in these foolish robots who crossed my path. These robots also reacted to me, taking cover, joining up and trying to take me on, it really felt like a firefight against opponents instead of a shooting gallery. Combined with the guns I also had a recharging shield that I could activate for a short period of time to ward off a bit of damage, and an area of effect attack which had customisable effects. I chose to make enemies flee before me, channeling my inner Conan the Robarbarian.

Eventually, by use of a special tool, you can recruit other robots to do your bidding. As you progress through the game you gain ranks, and this determines what robots you can take control of, they have to be of a lower rank than yourself. You can recruit them and then off you go, pointing out locations for them to visit or enemies to attack, meaning finally you have some backup in this big open world in front of you.

What also surprised me was the level of customisation you can do on your chassis, you can change your loadout at any base you claim and from there, spend the in-game currency to buy new parts and weapons and change up what you’re rolling as. If you die or teleport, you’ll always plop into a body with the same loadout you just chose, so the only thing you’re really losing is time and maybe progress on the map if, for example, you died defending a base against enemy assault.

The systemic and procedural nature of the game is something that really shone when I was chatting to Jim, he told me about a time at Rezzed where a player hadn’t bothered progressing through the initial starting tutorial area and what had happened was that friendly robots on this player’s faction had proceeded to wipe out much of the robots in that area, leaving it fairly open and empty. Jim hadn’t seen this kind of thing happen before, and it’s testament to the variety of the game and how differences of approach can really change up the game and what you’ll see in it.

In terms of the story of the game, Jim confirmed that there were really only a couple of missions and events that were essential to the game, so in theory you could pull a Breath of the Wild and head straight to the endgame and finish it fairly quickly, however there’s a huge wealth of things to do in that world. The world is divided up into territories, with differing factions controlling them. They battle it out, and similar to the later Far Cry games you can take out their bases and take their areas for your own. This can also work the other way though, with counter attacks and enemy strikes to watch out for. So prepare for war, but prepare for defence too!

In my brief time with the game I fought off robot bandits, explored ruins, teleported my consciousness from chassis to chassis, and found strange cubes that hinted at a bigger story.

Overall, if you’ve played a S.T.A.L.K.E.R. game, you should check this out. If you haven’t? Then you should check it out because it’s looking like it’s going to be just that good. We had an absolute amazing time, and almost had to be dragged off the machines when it was time to move on.