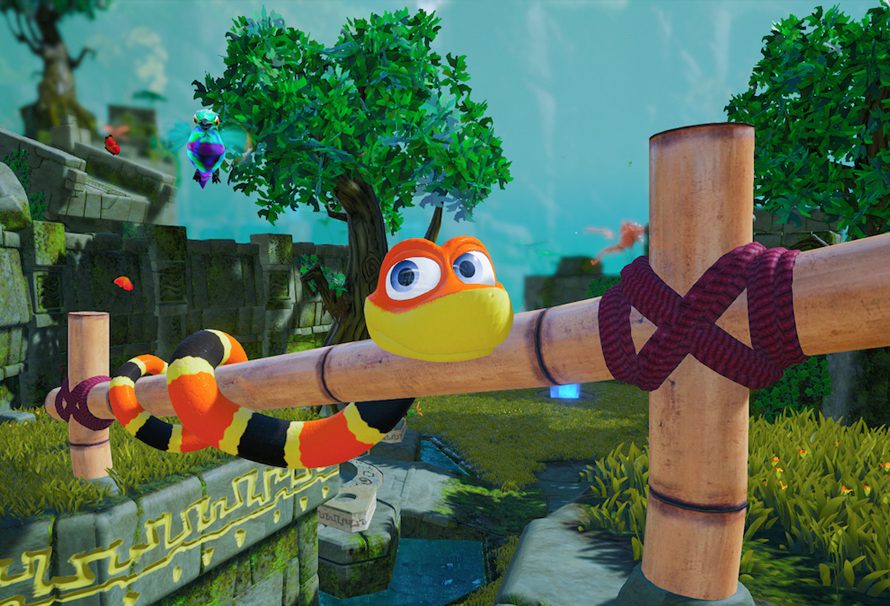 At Rezzed 2017 Alex and I got the opportunity to chat with David Dino, Designer and PR Analyst for Sumo Digital about their brand new game, Snake Pass. You can check out our Q&A below to get some of the finer details on the game, including David’s favourite type of snake and his views on creativity in the gaming industry.

Rob: So just to break the ice a bit, what is your favourite snake?

David: That is a very, very good question. The first thing that came to mind is a Cobra, but as I am from the United States I would have to say Rattlesnake. I also encountered one in the wild as well.

Rob: Snake Pass is a very physics heavy game, what work went into the physics? Did you study a lot of snakes?

David: So interestingly, this game came from an internal game jam that we did in October 2015. The creator, Seb Liese, who is also a designer at Sumo Digital won the game jam with this idea. The mechanics initially came from the fact he was learning the Unreal 4 engine for a project that we put him on. He was trying to figure out how character’s spines work within the engine.  So he had a rope connected to the ceiling (within the engine) and he wanted characters to interact with it. The rope fell to the ground and fell into an interesting position, he then thought ‘what if I can control this rope?’ he also used to be a biology teacher and had owned several pet snakes prior to becoming a game designer. So it was kind of like a 1 plus 1 equals 2 situation and the idea came about from there.

Seb has a very good idea of how Snake physics work through owning some and through his biology background. So Noodle (the Snake in Snake Pass) is actually created out of 35 independent collision spheres which are connected by physics gliders. Each of those spheres are calculating what it’s touching, what it’s not touching and what the other spheres are doing as well, in order to create the proper amount of force to move forward, also taking into account curvature and all that stuff as well. So there is a lot of heavy calculations going on, on top of many other things that are going on in the game. So for people who think that there isn’t a lot going on in the game, it is very heavily physics based.

Rob: That sounds amazing, so what is the game’s plot? Is it a “Hi-Snakes” tale?

David: YES! (laughs), well if you want to put it that way then sure, there is a light story to the game. Snake Pass is named after the road between Sheffield and Manchester, as Sumo Digital is based in Sheffield. So you could say the game is based off a real place, however we don’t have fire, earth and water realms (laughs) some times it feels like it but you know. In the game, every year the snakes have a big migration to the top of the pass and they use gates between the different realms in order to get there and have a big party or whatever they do. So Noodle, our hero, and Doodle the humming bird, wake up pretty late and miss the migration, so they go off to the first gate in order to move onto the next area. But for some reason the keystones that activate the gate have been moved. It is now Noodle and Doodle’s job to find all the keystones and put everything back in place, in order to figure out the mystery as to why these keystones have been moved. So there is lore in Snake Pass for sure (laughs).

Alex: I can imagine there will be a long story section on the Snake Pass Wiki at some point in the future.

David: It’ll be on par with the Warhammer wiki (laughs) I have spent so many hours getting lost in those.

Rob: Do you think 3D platformers are making a comeback?

David: Yeah definitely, with both Snake Pass and Yooka-laylee for sure. It’s really cool to see colourful mascot platformers making a comeback. I would love to see more, I am hoping that these games will bring in a resurgence of 3D platformers. I do think they add a lot to the plethora of games out there at the moment. Snake Pass is bringing a unique spin to the way characters are controlled in a 3D space and I hope this will inspire developers to do a lot more crazy things in the future.

Alex: As you say it enriches the gaming world and allows space for more crazy projects.

David: Yeah, that’s the beauty of independent developers, because they have the freedom to do what they want. Sumo Digital in general, we normally do a lot of third party publishing for games such as Crackdown 3, Dead Island 2 and we have done some work on Hitman. So it’s nice to work on our own thing and show that Sumo Digital is very creative, and to flex that creative muscle. It also lets us give our own staff the ability to get creative. This is our first self published game and I would love to see more titles come from Sumo Digital in the future.

Snake Pass is available now on PC, PS4, Xbox One and Nintendo Switch.