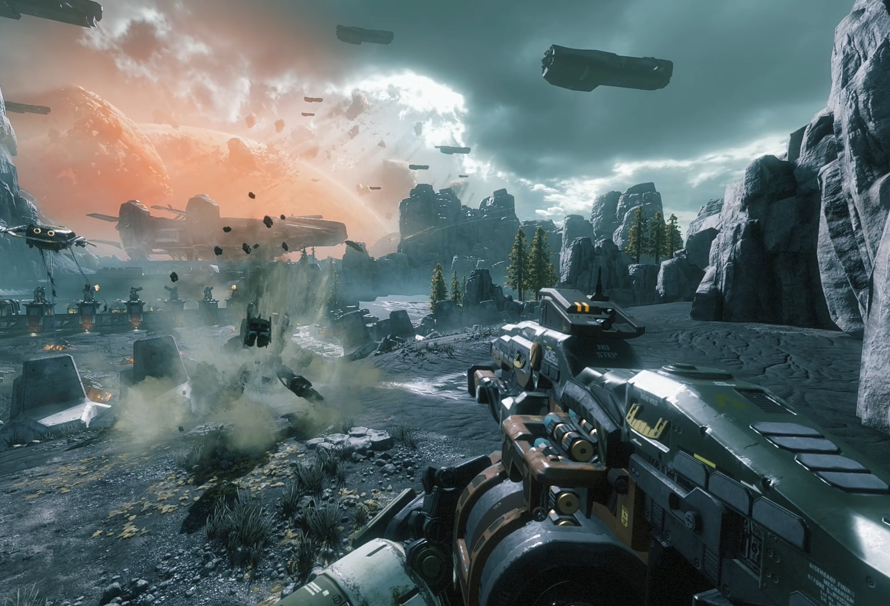 The year 2020 is an odd one so far, so thankfully we’ve all got video games to keep us occupied. There are plenty of genres to choose from, and while you might have a favourite, it’s hard to deny the appeal of the first-person shooter. No other genre plonks you into the action quite as well, but knowing which are the best fps games 2020 is hard, so, here is a list to help you out.

Apex Legends stealth-released in a competitive genre. To the surprise of everyone, it not only was excellent but still is. The excellent mix of heroes to play as, the wonderful map design, and the extraordinarily good weapons make for a heady mixture. It helps that’s it’s always getting updated too, and you never quite know what to expect from the new character they put into the game. This might well be one of the best battle royale games out there, and you should definitely try it if you haven’t already.

Left 4 Dead 2 is the foundation of so many FPS games around nowadays. There are constant attempts to recreate the magic of this wonderful game, but so far no other game has captured the joy or sheer terror that Left 4 Dead 2 mastered. It’s a game all about surviving together with your friends against impossible odds. Or it’s a game about slaughtering foolish humans as the living dead, either way, it’s an awful lot of fun and you’d be a fool to not still be playing it.

Not convinced? Here’s another 5 reasons to play Left 4 Dead 2

Now, you can feel free to include Call of Duty: Modern Warfare as a part of this entry if you want, but it’s hard to deny the fact that Warzone is both free and also an excellent battle royale game. The quality is a little bit above every other battle royale game around, and while it might not have the heart of something like Apex Legends, it has a huge amount of appeal thanks to the sheer level of polish here. If you then decide to upgrade to the full game you’ll be given a twisted campaign and a truly excellent selection of multiplayer modes to choose from too.

Find out how Call of Duty Black Ops Cold War will change Warzone.

Forgive us this little bit of speculation. While Valorant has only just gone into beta testing, we’ve all been watching the streams of it with bated breath. Fair to see it definitely looks good, as the odd offspring of the unholy union of Overwatch and CS:GO, but it looks like the people playing it are having fun too. Who can blame them, Riot knows how to make good games, and if this stacks up anywhere near as well next to their other games then it’s sure to be a huge success in the FPS space.

Metal? Check. Demons? Check. Chainsaws? Check. Doom Eternal builds on the 2016 version of Doom by adding in more. Just more of everything, more enemies, more attacks, more guns, more options, more face-melting metal. It’s an action FPS that makes many other shooters look like they’re moving at a snail’s pace. It’s not a perfect game, but the introduction of the multiplayer elements and the sheer brilliance of the singe-player campaign helps make it one of the best FPS games 2020.

The chances are that if you’re not already into CS:GO, then you’re going to really struggle to get into it. It’s an undeniably excellent shooter, with wonderful level design and the kind of satisfying feedback that a lot of modern-day shooters are still aiming for. It’s also a game filled with people who have spent more hours in this one game than you might have time for, which makes them overwhelming painful to play against. It is, however, an excellent feeling to find yourself at the top of the leaderboards, so if you’ve got the patience for something great, then this could be it for you.

Overwatch 2 isn’t anywhere in sight, so the original game is still the best hero-shooter around. While you might not always agree with the choice of new characters or updates to the queuing system, you can always agree that it feels great to play. This ever-evolving title could keep you occupied until the end of time itself, although we recommend picking up other games too, just for variety’s sake.

Who would have thought that Rainbow Six Siege would become the powerhouse it is today? It released to a mixed but rather flat reception, but it’s been reworked and updated so many times that the game that exists now is almost unrecognisable. It’s an astoundingly satisfying shooter and one that demands your constant attention. This is an excellent choice if you like the nitty-gritty of a gunfight, but don’t want to prepare yourself for the commitment of the next game on our list.

Sometimes you just need to assign a key to check how many bullets are left in your magazine, you know? If you don’t know, then Escape from Tarkov goes for a painstaking level of interactivity and player agency. It’s not just reloading, it’s counting your bullets, you’re never just going for a quick match, every fight is for your survival. It’s tense, horrifically upsetting at times, and incredibly rewarding.

Check out our guide to the Best Settings for Escape from Tarkov.

No list of the best FPS games 2020 would be complete without Titanfall 2. It’s still one of, if not the best example of how stunning story-telling in an FPS can be, and without it we wouldn’t have the excellent Apex Legends either. It’s not just the powerful combat that makes this a stellar game, but the things it does with your progression through the game and the way it messes with your expectations make it a standout, and it probably forever will be.