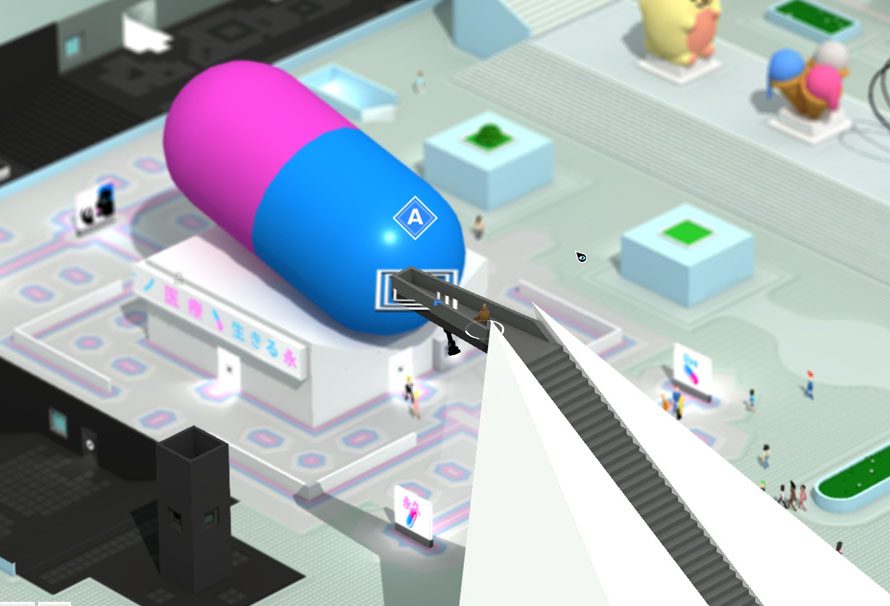 I have to admit that the first time I saw trailers for Tokyo 42, I was put off.

“It looks so tiny” I thought. “I won’t be able to tell where my character is.”

If you’re not sure what Tokyo 42 is, it’s like if GTA, Syndicate, and Monument Valley met up, had a fight, and the result is an open world physics based shooting game that constantly brings a smile to your face.

The thing that stands out for me in Tokyo 42 is how sunny it is. I know that seems fairly obvious, but it’s so refreshing to have a game have such a strong colour pallette and be playful with it, whilst also being a cyberpunk game. Most cyberpunk games are grimdark, and that’s absolutely wonderful and definitely an aesthetic I’m in to, but Tokyo 42 is different and it’s got an unnerving feeling to the world that’s all its own.

Blade Runner is beautifully dark, but at some point the sun rises, and that’s where Tokyo 42 begins.

The game’s set on the sunny rooftops of Tokyo, with you fulfilling assassin contracts with the ultimate aim of uncovering the web of conspiracy which led to you being framed for murder. The game doesn’t put much between you starting it, and you playing it. Within a couple of minutes you’re bounding your way over cyberpunk roofs and taking contracts to blast opponents in a variety of ways. The game gives you a fair amount of help, with mission/context sensitive help menus appearing to give you a hint about controls, and a little line and selection circle around you that lets you know at all times, this is where you are, even when you’re in the air.

It’s a surprisingly deep game, when you start it you might just fall into thinking it’ll be a game about hopping about, platforming, and doing some almost-bullet-hell-style fights with multiple opponents.

It soon introduces stealth, with a stealth system that’s robust enough for you to ghost your way through missions and plot your path past enemies to reach your goal. When you’re spotted a detection triangle appears, narrowing in on your character. This gives you enough time to panic, and jump off a building to your death (if you’re like me), or react appropriately and get back into cover (if you’re good at games). If you do breach stealth, you can either run away and smack a button to change skins to hide, or blast the crap out of them.

You can also take your time when approaching a situation. You’re given a set of binoculars for scoping targets out and mark enemies of interest, and it’s quite rare in the missions at least that you’re not aware of what’s coming up in a fight. You can check out what’s ahead of you before you take that first step into the arena of death, and that gives you time to plan a way in, how you’ll deal with things, and what’ll happen if it all goes wrong.

That doesn’t mean the game is a walkover though. The physics based combat system means that grenades take true arcs through the air and you’ll have to plan where they’re going as well as where your opponent’s, and if you’re engaging the enemy in open combat then you’ll see the screen quickly become a bullet hell of projectiles, any one of which is death. Just check any of the Cop Drop Dailies to see how this can end up, with cops pouring in via their cop…hover…things to blast at you, rapidly ramping up the action:

Thankfully respawning is quick and you’re back in the action in seconds, and it’s only rarely that I’ve found something too difficult where I’ve had to back out of the mission and go do something else for a bit. Even when I’ve had to do this, it’s only to learn the systems better and come back with (hopefully) enhanced skill. There’s a lot of weapons to pick up and stuff to buy, but most of what’s important in the game is learning its systems. Being better with the guns that you have is definitely always better than picking up a more powerful gun that you can barely aim in the right direction.

There’s just so much to do in Tokyo 42 and I’ve been surprised by just how much there is in there. Secrets litter the map, from new skins for your Trackacat, to new coats and just plain ol’ money. I’ve found a series of buttons and icons across the map, I’ve figured out what some of them do…but others still remain elusive. Every main mission seems to unlock loads of side missions too from a cast of characters that seems to grow the more you progress. Last night I unlocked a series of parkour-delivery missions, and another one that turned the whole map into a race course for me to bomb along on my motorbike.

I can’t bang on enough about the aesthetic, it’s so rare to see a game be so bold with colour, especially pink. The soundtrack is just sublime too, with ambient sounds and a more pumping soundtrack when you get into danger propelling you through your rooftop adventure. I mean look at it this game, LOOK AT IT.

There’s a multiplayer mode too which I haven’t really been able to dip into just yet, but it looks fascinating. Along similar lines to Watchdogs’ multiplayer or the one found in some of the Assassin’s Creed games. You spawn in an arena with a load of npcs, and you’re trying to kill the other player. The problem is you don’t know who they are, and they don’t know who you are. So you’re either watching them to slip up or you can set your Trackacat on them. Either way means there’ll probably be a gunfight at some point, but it feels like it’ll have a delicious hunt to it as you try to work out just which of the many NPCs on your screen is actually a real human.

Overall, I’ve fallen pretty hard for Tokyo 42. I’m sitting here in London writing this, but my heart, ah, my heart. It aches for the rooftops of cyberpunk, sunshine Tokyo. I shall return there soon.

Tokyo 42 is out today for Xbox One and PC, and will be coming to PS4 soon. Watch the launch trailer now!