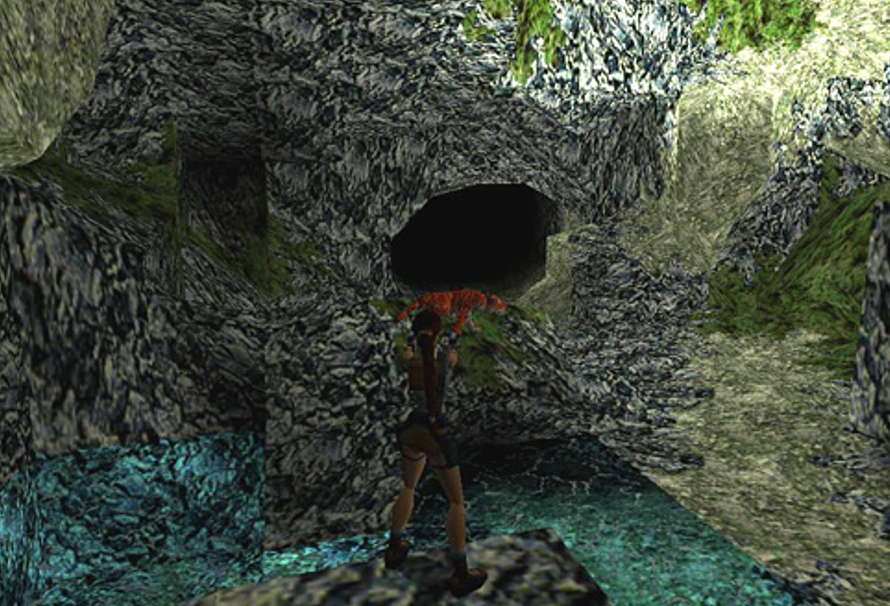 The sound of footsteps echoes around the damp cave as you approach a small opening. Rocks tumble from hidden ledges that you can’t quite reach and sharp edges of slippery paths jut out along the descent to the lush, overgrown ravine. The waterfall sinks into view, plastering the side of a craggy slope and it’s all quite peaceful. Until, you notice the tigers, sprawled along the side of the stream, their claws threatening your progression. It’ all very rigid, exposed, complete. You’re playing Tomb Raider and you love every moment.

Now, you’re sliding, you’re grabbing, smashing, pushing, wriggling in between gaps. Shooting the same enemies over and over. You’ve got a pickaxe in hand and it feels awkward and overpowered. You can upgrade it, you can upgrade everything. There are campsites everywhere and you can be anyone, with bulletproof vests and trousers that give you health, for whatever reason. It always seems to be snowing and the ice is relentless and slippery. You notice how much you’re slipping, falling between cliffs and shoving the axe right into a convenient spot. You don’t shimmy anymore, you glide, effortlessly. You’re playing Rise of the Tomb Raider, do you love every moment?

The Tomb Raider reboot had writer Rhianna Pratchett behind the script and it was a chance for Lara Croft fans to reprise the role in the epic third person action game that started on PS1. Do you remember the volume of locations you’d visit in just one game? The first Tomb Raider alone had you travelling to Peru, Greece and Egypt and different cities and towns. It became exciting in Tomb Raiders, where am I going next? The Tomb Raider reboot, you play as a young Lara and you’re thrust into the jaws of a terrifying island after your ship capsizes. It worked, stripping back Lara to her pre-tomb days when she was just a young woman out chasing dreams with friends.

The setting of just one island, filled with horrors and it reflects the naivety of young Lara well. It almost feels like a horror game, a discovery into who Lara will become with time. As you’re thrown into the deep end, struggling to survive and unearth the secrets of the island of Yamtatai, a lost and fictional place in the Dragon’s Triangle off the coast of Japan. Put an arrow through a deer to eat. Limp to the next campfire covered in blood from your enemies and a bit of your own. Go deep into the fiery caves and tread carefully over empty skulls – it’s pretty gritty and I love that.

However, the same tricks just didn’t work the second time around in Rise of the Tomb Raider and Lara became lost on me. Who is she now? A Tomb Raider, she’s not as polished, she’s still got a lot to learn, but her abilities and skills know no bounds. It felt a bit silly, launching myself around jumps I highly doubted I could make and thinking if she really landed like that on the pickaxe, her arm would rip from its socket. The locations don’t feel defined, set in Siberia, the graphics are undeniably amazing and the setting is beautiful, but it feels samey. I got a little frustrated with the way the game used the setting, with avalanches and breakable ice. It became predictable.

The original Tomb Raiders were all about the puzzles, the intrigue and the weirdness that would seep through the game gradually, revealing a bizarre fantastical twist. The baddies were believable and they sauntered through the game unscathed, whilst Lara had to tiptoe around their every move. The original Tomb Raiders were actually about tomb raiding and the treasures would be at the heart of each story. They were all about discovery and mystery. You always felt slightly unsafe, unsure. Remember turning into gold on the giant hand?

When it came down to the creatures, it would range from grizzly bears to dinosaurs. Rise of the Tomb Raider gave us wolves and humans and then these weird beings called the Deathless Ones, who defend the city, which holds the Divine Source and grants immortality. It’s fine. The story isn’t about treasure or tomb raiding, but you find out what happened to Lara’s dad, which is also a prevalent force throughout Tomb Raider games and films. The story of how he died is sad and a little weak, we know it’s Trinity, but the story falls flat when it comes to main baddy, Ana. A woman who seduced Lara’s father to extract the information she needs. I thought he’d be better than that.

Tomb Raider is all about puzzles, but that doesn’t feel like that’s the case anymore. It’s been heavily replaced by action and I kind of miss trying to solve intricate puzzles and annoying areas to progress through the game.  I love the caches in the reboots and they are a lot of fun to find and study to gain achievements. It doesn’t make it easy either and they are very hidden. Only climbing your skill tree and using your points that you achieve through the game on ‘survival’ options will let you find these easily.

Speaking of the skill tree, I’m actually a huge fan of the skill point system. Where you use skill points you earn throughout the game to advance your abilities. You can choose between Hunter, Brawler and Survivor. Hunter will allow you to strengthen your attack skills, Brawler will make you stealthier and more cunning and Survivor, as my favourite, will get you all the handy little perks that come with finding tucked away treasure and rewards.

Recently, the Tomb Raider games transitioned to semi-open world. So there are areas you can explore freely to complete missions and quests. The side missions are surprisingly fun and normally involve gathering hides or finding a unique flower buried somewhere. What I didn’t enjoy were the tombs, which I suppose defeats the point, but the optional tomb missions were lengthy and unrewarding.

I wonder what Tomb Raider would be like if it went full open world, I don’t know how I feel about that. Could be quite fun.

Saves and checkpoints, like with any older generation game, are quite punishing and the campsites in the latest games, although they are quite frequent, are the only place you can upgrade weapons and spend your skill points. I do love this about the reboots and as discussed the skill tree is a great addition.

However, the clothing that Lara can kit herself out with is a bit naff and includes random enhancements that can help you throughout the game. It does take away the raw feeling of the game that the first in the reboot got so right. Weapon upgrades are scarce and that’s good and you have to choose which weapons you want to power up. I went for the crossbow and shotgun, a nice combo of short and long range weapons that are really fun to use.

With leaks surfacing on Shadow of the Tomb Raider, it’s sort of opened up old wounds. I’m really hoping that there won’t be a hint of snow and Lara will be back trying to find herself, in amongst the abundance of accessories and countless wolves. Give me a baddy that I’m scared of, a secret that I want to uncover and a plethora of locations to hurtle myself around (with proportionally sized leaps).

Square Enix lifts lid off Shadow of the Tomb Raider