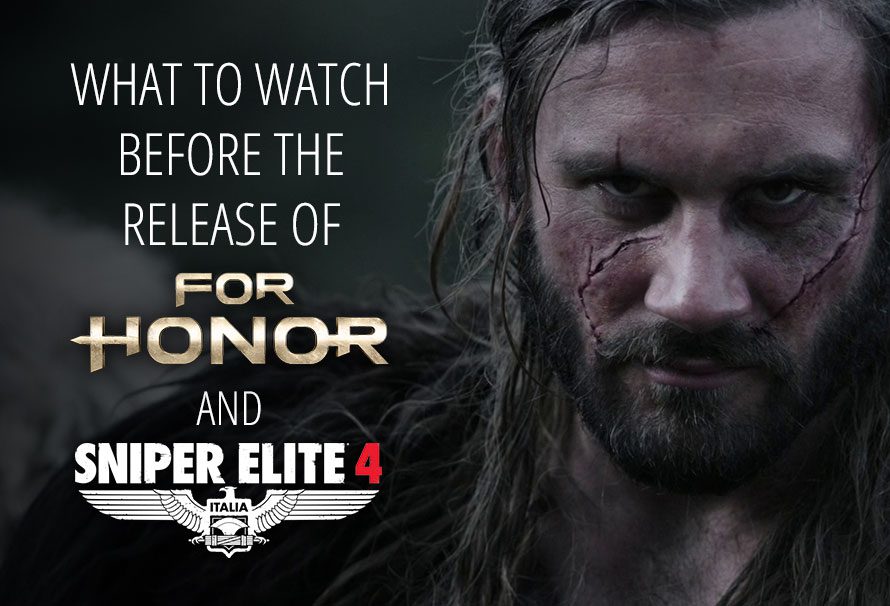 With both Sniper Elite 4 and For Honor releasing tomorrow, we thought it would be a cool idea to list some movies and TV shows you should watch before both games release tomorrow.

Please note: that this list is for entertainment purposes and will not increase your skill in for Honor and Sniper Elite 4 in any way.

If the name isn’t explanation enough already, then we are wondering why you are purchasing For Honor in the first place. Vikings a TV show about the Viking uprising which started around the 8th Century BC. It is loosely based on fact and has a fantastic cast of characters. Ever wondered how the Vikings invaded England and other countries? Well this show has the answer!

A brutal, bloody fight till the death, 300 doesn’t hold back on the gore factor, complete with head removals, shoves off ledges and spears to the chest – you can find all of these in For Honor! The epic film tells the story of 300 Spartans who marched against the Persian king, Xerxes.

The 1954 film takes place during the Sengoku Period of Japanese history. It’s about a farming village who hires 7 Ronin to combat bandits who plan to steal their crops. The story is pretty simple but the film as a whole has been considered a masterpiece by critics. Also there are Samurais in it, what more can you ever want?

Possibly one of the more light hearted films in our list. A Knight’s Tale hasn’t got as much one on one combat as one might like to get you in the mood for For Honor. But the whole Knight theme and generally great humour makes this film a pretty good watch in any case.

If you want some pretty awesome Samurai action then The Last Samurai is for you! Set in 1876, Nathan Algren (played by Tom Cruise) is a retired officer of the United States 7th Cavalry Regiment. His emotional conflict brings him into contact with Samurai warriors in the wake of the Satuma Rebellion and the westernisation of Japan.

An intense war drama, following the story of a US military marksman, based on the true story and memoir published American Sniper: The Autobiography of the Most Lethal Sniper in U.S. Military History. Taking place in the Iraq War, over four tours, the marksman Kyle, took 255 kills. The story explores military success and the toll war takes on soldiers and their families.

If anything, this film has the exactly the same setting as Sniper Elite 4. Nicholas Cage plays an Italian Army Captain during the time in 1943 where the Italian troops are massacred by the Germans. True, you probably won’t get inspired to lock and load your Sniper Rifle but the setting is pretty damn perfect.

Before you ask we are talking about the Quentin Tarantino remake of this epic war story. If you want a Nazi inspired war film with a lot more grit and violence then this is probably more for you. Set in an alternate history where two plans have been set to assassinate Nazi Germany’s political leadership. We believe the film’s story is just a typical assignment for Karl Fairburne.

Enemy At The Gates

Another great sniper movie, Enemy At The Gates is loosely based on war stories told by Soviet sniper Vasili Zaitsev. The story follows Zaitsev as he finds himself on the front lines of the battle of Stalingrad. It is a great movie with some pretty awesome sniper action, perfect really to whet your Sniper Elite whistle.

The Man In The High Castle

Just in case you were wondering what the wold would be like if the Nazi Regime won World War 2, then the Man In The High Castle has your answer. This is a great show that really gets you angry at the Nazis (just in case you weren’t angry enough already). By the end of it you’ll be wanting to enlist Karl’s help to take down the regime.

So there you have it. If you know of any other TV shows and or movies that you think would be perfect to watch before the release of For Honor and Sniper Elite 4 then let us know in the comments below.