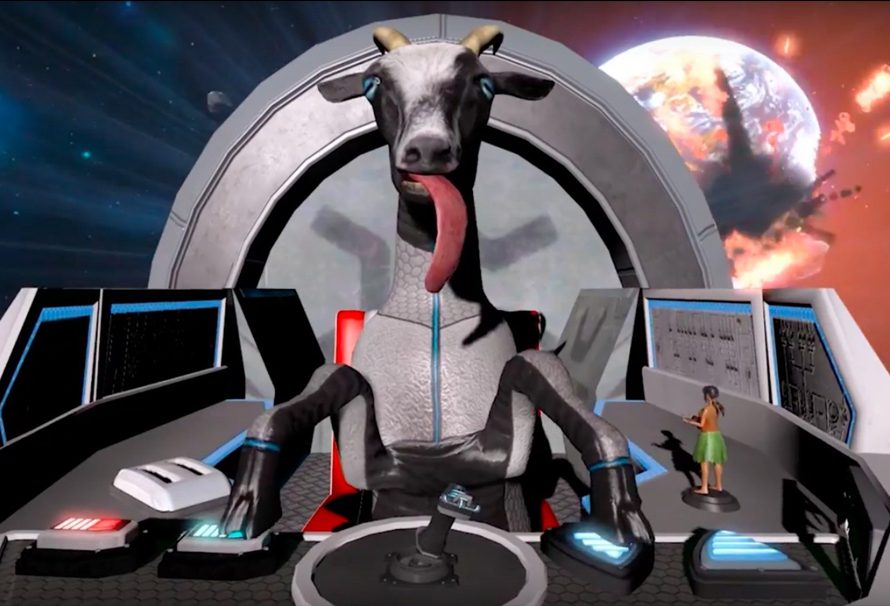 When it comes to video games there is a plethora of weird and fun titles out there. Join us as we take you through 10 strange but amazingly enjoyable games that you should be playing, and if you have, why not discuss your favourites in the comments below.

Have you ever wondered what life would be like if you were a goat? If yes, then Goat Simulator is probably the closest you are going to get to that answer… sort of. Goat Simulator puts you in the hoofs of a goat as you explore possibly one of the most buggy open worlds ever. What’s even more crazy is that the game is completely designed that way, so you will be able to blow up gas stations with your tongue, fly around in jet packs, benefit from the completely outrageous physics system and even challenge oncoming traffic to a fight. It sounds mental but it is crazy fun!

If being a goat isn’t your thing then being a slice of bread must be! In I Am Bread players take control of a slice of bread as it has to make it’s way to the toaster in order to live it’s dream as a lovely piece of toast. Players have to navigate from one side of the kitchen to the other dodging various obstacles and trying not to land on the floor. It is a pretty addictive and challenging game that will have you wishing that you were a slice of buttery toast for hours.

A local multiplayer game for up to four players. Super Kitty Boing Boing has players controlling spring loaded cats across thee various game modes such as death match, coin collection and a game mode where you have to fight over a slice of toast. If you like cats, 16 bit style graphics and your love of toast goes further than I am Bread then this is the game for you.

Golf With Your Friends

Because golf without your friends is pretty boring, Golf With Your Friends has up to 12 players playing crazy golf. Currently in early access , this is a relatively straight forward golf game that is surprisingly addictive. You will play across six levels which increase in difficulty in some crazy locations. So if you and 11 other mates fancy some virtual golf then this game should be right up your street/putting green.

If you love platforming games that are ridiculously hard then Super Meat Boy is for you! This platformer has players controlling Meat Boy as he risks life and limb in order to save his damsel in distress. You will control our meaty protagonist as he dodges seas of buzz saws, crumbling caves and countless amounts of spike filled pitfall traps. Quick reactions are needed for this game and you will die a lot, but when you do finally succeed you will be greeted by an epic wave of satisfaction.

Do you think you have what it takes in order to build the best space craft? How about a space craft that is able to fly into space without killing any crew members? It may sound straight forward but Kerbal Space Program encourages you experiment with all the parts that are supplied to you. You have to think and work out which part does what in order to make your space craft fly. Its a great concept that will have you creating some weird and wonderful flying machines.

Surgeon Simulator isn’t the most accurate game when it actually comes to accurately simulating surgery. In this game you will be given the tools available to you in order to perform surgery. It is then up to you what to do next. Perform the surgery? Start waving a scalpel wildly in the air until something happens? Remove the patience’ organs and replace them with house hold items? The choice is yours.

If you think your games library is lacking a psychic platforming game then why not give Psychonauts a bash. Players control a Raz, a psychic soldier as he journeys through peoples brains in order to become a Psychonaut. Players will be thrown into various psychedelic levels and will slowly uncover a sinister plot which is both gripping and amazing.

Escaping prison has been one of life’s great mysteries, Shawshank did a great job of it, as did Prison break. but when it comes to escaping jail in video games then one game has it nailed. The Escapists is a puzzle game like no other, which has players trying to figure out inventive and creative ways to escape prison. Players will be required to use tools and anything else they can find around them whilst carrying on with their daily routine and not raising suspicion. It is a pretty great game that will have you thinking of the ultimate escape plan for hours on end.

Halloween is the time of year where almost everyone around the globe dresses up and goes to parties or more importantly goes Trick or Treating, Costume Quest takes the idea of trick or treating and makes it into an brilliantly fun action RPG. Players choose to control Reynold or Wren who are siblings that have just moved into a new neighbourhood. It is up to Reynold or Wren to embark on a quest to save their twin from the clutches of an evil monster before they break curfew. this is a light hearted RPG that anyone and everyone should play.

Have you played any of these games? Which one is your favourite? Let us know in the comments below.