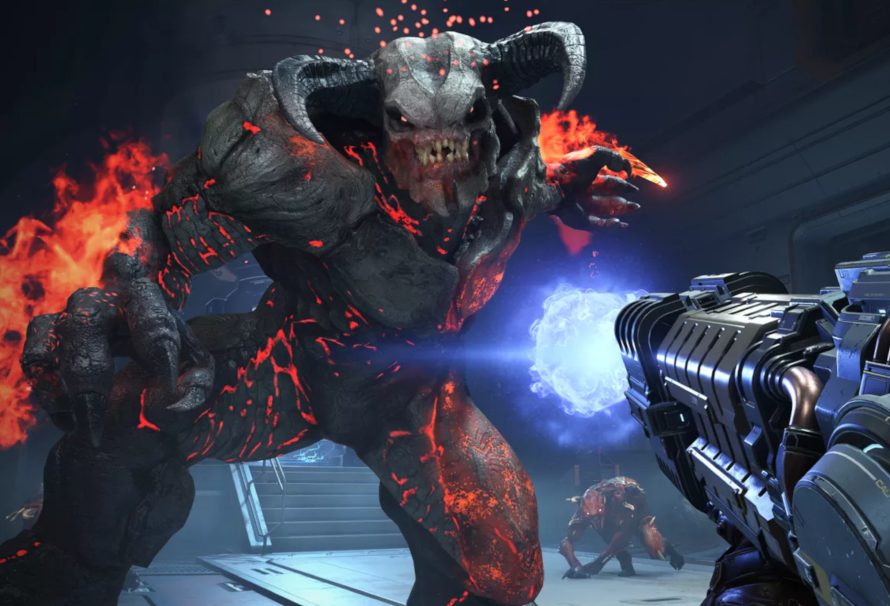 The Year of DOOM is upon us once more, and this time they’ve turned it up to 11. It’s hard not to be excited about the follow up to 2016’s smash hit reboot, but DOOM Eternal is a lot more than just a sequel, It’s a full-blown evolution of a franchise finding new popularity with modern gamers.

Last week we had a chance to attend a special event where Executive Producer Marty Stratton brought us a surprisingly honest look at the shortcomings of their 2016 smash hit, and how they approached the new game. “It’s all about keeping players in the fun zone” seemed to be the tagline, “Gamers these days are sophisticated”. This came just before a detailed outline of what they believed were the shortcomings of their 2016 outing. It was made clear that they were aware of the issues with gameplay becoming repetitive, a lack of post-launch support and a multiplayer mode absent of any innovation, as they began to detail how they addressed these issues. Two of the big headlines being resource management and difficulty scaling.

“Keeping everything within arms reach”

Though you still have the traditional difficulty levels, they have added some mechanics to allow newer players to the franchise, and players less skilled in the art of the FPS, means to keep pushing through harder fights in the game. One such mechanic is the addition of Sentinel Armor “where not gonna make you wear a ridiculous hat or anything”. If you find yourself dying repeatedly in a specific fight the game will grant you the Sentinel Armor, which simply makes your DOOM Slayer a little bit tougher and capable of taking a few more hits. Another feature is the extra life or 1Up floating helmet you can find in hard to reach places around the map. By collecting one of these your DOOM slayer will automatically regenerate all his health if it reaches zero, but only once, giving you an extra chance to keep pushing through the hordes of demons you’ll be facing.

Another key aspect is resource management which makes the game like a kind of “combat puzzle that’s worth your time to solve”. It’s simple really, need health? Glory kills, Ammo? Rip and tear with your chainsaw, extra Armor? The awesome new shoulder-mounted flamethrower has your back. These three elements combined with an aggressive need to manage each one on a continuous basis makes for a more tactical approach to your fights. You need to be smarter and more focused on your resource availability. You find yourself paying closer attention to all three and shifting more freely between weapons so that ammo reserves deplete at a more even rate. Trust us when we say those 16 shotgun rounds you can carry will disappear in no time if you’re not paying attention.

Multiplayer takes on two forms here, Invasion and Battle mode. Invasion is kind of a fun way to annoy your mates, you can jump into your friend’s campaign as a demon and just Raze Hell for him, I mean that’s what friends are for right?

The main focus though is Battle Mode, which id Software is pitching as their own competitive angle for the franchise. It’s simple, two players enter an arena as demons, one as the DOOM slayer…… FIGHT! The DOOM Slayer gets his full armory and abilities to survive with, whilst the Demons each have their own unique abilities and powers. Some will be tanks that you need to get up close and personal with, some will have ranged attacks that, for example, set an area of the ground on fire, or summon an angry horde of lesser demons. A single match comprises of 5 rounds so it’s the first to 3 wins that’ll take the crown here. It sounds great in theory but we’ll have to see how balanced it is when the game lands.

One thing is clear so far, DOOM Eternal is more, more, more. Not just of what we loved from the reboot, but everything. The game’s world has been fleshed out with not only a wider variety of collectibles, but a rich lore that reveals the origin of the DOOM Slayer through the games main story campaign and codec entries found scattered across the map, it was made clear though that all this is optional, It’s not an attempt to shift away from the games main focus, which is slaying demons in the most violent manner possible. It does, however, leave room for a wider variety of levels, including their own depiction of what Heaven looks like within this universe. You even have your own base of operations, the Fortress of DOOM, which you will visit between levels to view your collectibles, your armory and even practice your demon-slaying skills.

But wait, there is indeed, MORE. On top of all this extra content, there is also the addition of Master Levels. Master Levels are a way for DOOM Slayers to really test their mettle, it’s a chance to go back and replay levels from the campaign, but with more demons to kill, some from later in the game added in and you with all your weapons and abilities you’ve collected through later stages.

In our minds, this is where things get interesting. id Have committed to a rather extensive calendar of post-launch content. Starting off with no less than 2 campaign DLC’s, though no time frame or other details on these were given. New Master Level challenges to take on and new playable demons and maps for the Battle Mode multiplayer. In addition, we’ll also see unique skins for Battle Mode, amongst other cosmetic collectibles, to make yourself unique. Now I know what your thinking “COSMETICS, micro-transactions confirmed” but this is not the case. Cosmetics will be added via free updates and will be earnable by just playing the game, we didn’t get much more detail than that but it’s good to see a pro-consumer mentality to their post-launch content.

Overall, we were super impressed, the new idtech7 engine brings a far higher level of detail to the games visuals and we’re assured it will run at a stable 60fps on all platforms. The most ear-grabbing statement made though was their intent to make DOOM Eternal a Game of the year contender. With a pretty stacked 2020 ahead of us, they have their work cut out for them, but from what we’ve seen so far, they are definitely headed in the right direction.