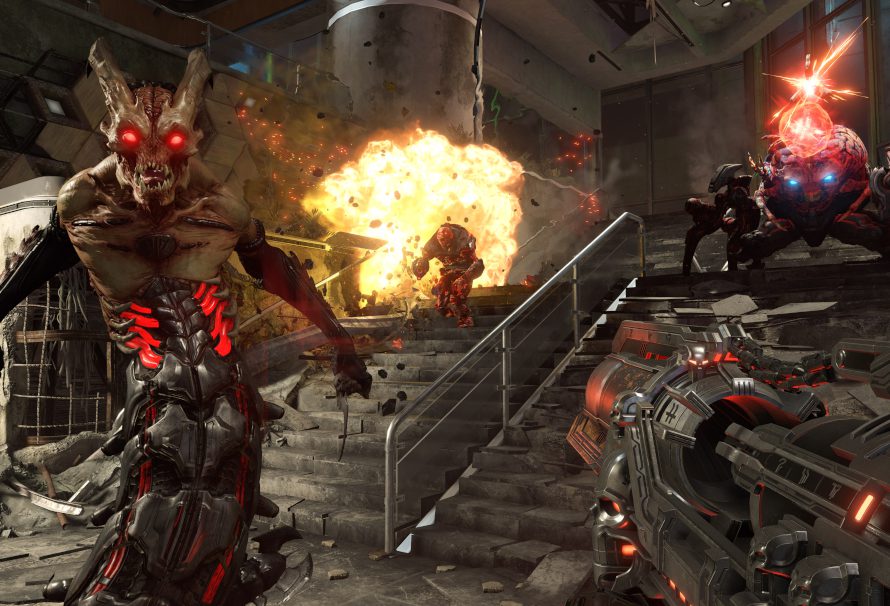 In every way that a game can be, DOOM Eternal is leagues ahead of its already excellent predecessor and nowhere is that more keenly obvious than in DOOM Eternal’s stellar multiplayer offering.

What might surprise you though is that unlike its predecessor, DOOM Eternal’s multiplayer modes are anything but traditional, so let’s take a look at what’s new in id Software’s latest shooter.

As part of developer id Software’s somewhat unorthodox approach to multiplayer this time around, DOOM Eternal sadly has no coop campaign mode. That’s right, as of right now there is no way to lay waste to the demonic masses with a friend.

Additionally, DOOM Eternal does not support traditional deathmatch multiplayer game types either, but before you get your chainsaws and shotguns at the ready, there are other neat DOOM Eternal multiplayer modes to get stuck into – namely the new Battlemode and Invasion mode – a post release multiplayer expansion that we’ll speak about in a bit.

Online Multiplayer – What Is Battlemode?

Essentially the crux of the DOOM Eternal multiplayer experience, Battlemode takes easily the most fun part of DOOM 2016’s multiplayer (namely the bit where you’re able to change into demons and wreak havoc) and basically build an entirely fresh competitive experience around it.

Absolutely epitomising the fast and white-knuckle furious shooter chaos that so well defined the series 2016 instalment, Battlemode is a neatly designed asymmetrical multiplayer mode in which two players take control of a pair of Demons in an attempt to destroy the third player, who is in control of the much more powerful Doom Slayer.

Unfolding across six different arenas at launch, Team Evil can choose from a selection of five demons (with more coming after launch) including the Pain Elemental, Revenant, Marauder, Archvile and Mancubus. Boasting far more than just cosmetic differences from one another, each demon possesses a veritable array of bespoke abilities in addition to special demonic loadouts that can be adjusted depending on your style of play.

Some of those abilities can really make life quite difficult for the murderous engine that is the Doom Slayer too. For example the airbourne, soul-spitting Pain Elemental can create a shield to absorb the Doom Slayer’s attacks, while the lumbering, guns-akimbo Mancubus can not only unleash intense firepower but can also stomp the ground too, causing a disruptive AoE attack in the process.

Beyond such baked in abilities, the various demons not only conjure various obstacles to stymie the Doom Slayer, but can also summon a range of smaller AI companions to do their dirty work too. If that wasn’t enough, the Doom Slayer must kill both player Demons within seconds of each other lest they respawn and begin the whole cycle of misery anew.

You shouldn’t feel sorry for the Doom Slayer however, not least because the mute, gun-toting maniac is horrendously powerful – boasting every weapon and mod in the game in addition to his trademark agility.  A neat dynamic which is in place is that at the end of every round, Team Demon can elect to buff themselves or increase the health of their AI buddies, while the Doom Slayer can gain perks which mirror those obtained in the story campaign.

Invasion Mode – What Can We Expect?

Taking a leaf of sorts out of the Dark Souls playbook, DOOM Eternal’s Invasion mode allows folks to invade the single-player campaigns of other players as a demon and make a whole heap of trouble for them because, well, that’s what demons do.

Envisioned by developer id Software as an endgame activity for veteran players, demons will be able to invade player campaigns at just about any point and will have access to secret traps and mechanisms to make life Hell for their human opposition. Though not confirmed, we’d assume that successful invasions award players with heaps of XP, providing ample incentive for skilled players to repeat the deed over and over.

Set to arrive as post-release content at some point after DOOM Eternal hits the shelves, we can already hear the stress-squeezing of mice and keyboards from here…