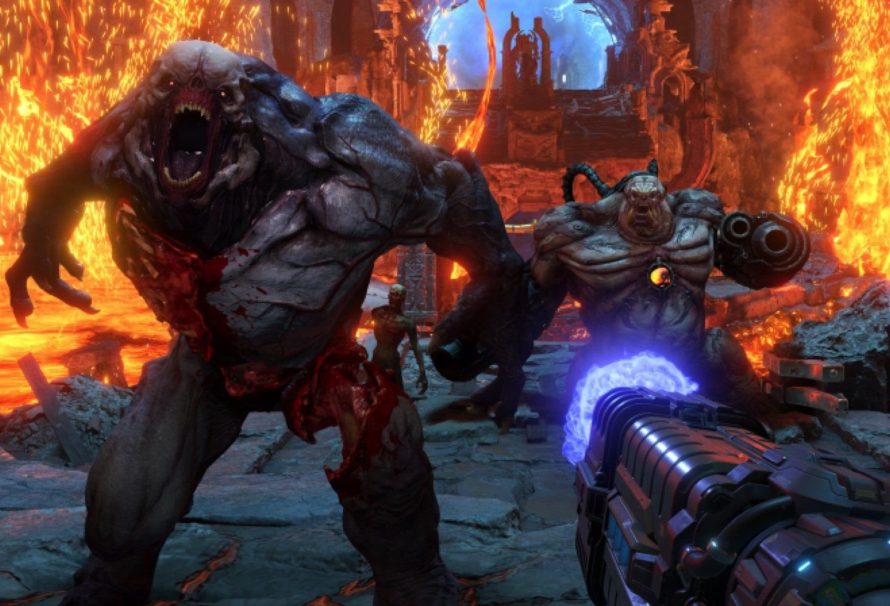 I’ll be honest – I don’t think many people play Doom for the story. It’s mostly about turning demons into gristle and mush whilst Mick Gordon’s incredible soundtrack blares in the background. However, you may not know that there’s actually quite a lot to dig into in regards to the background lore and characters that appear in Doom 2016 and its prequels. With Doom Eternal approaching at speed, we thought it’d be best to pin down the major plot elements that will inform this sequel and talk about what we can infer from the trailers so far.

As you may well know, Doom 2016 is a reboot of the franchise, but it still might be useful to know what occurred prior to the ripping and tearing until it was done. The original 90’s Doom games were lax on story but the basic premise was that you played as a security guard hired by the United Aerospace Corporation, who are performing inter-dimensional experiments behind closed doors. Naturally, the portals they create between worlds let loads of awful fleshy beasts in – bodies that you no doubt remember filling with copious rounds of buckshot.

Doom 2: Hell on Earth is fairly straightforward – Whilst the Doom Slayer fixed the mess on Mars, the demons invaded Earth, and now there’s a whole planet to save. In Doom 64 he heads back to hell to wipe out even more of the horde and stays on the Hell side of the portal to keep watch. It’s safe to say he deserves a rest, but there usually isn’t any for the eternally wicked. His poor brain!

Doom Storyline: What happened at the end of Doom 2016?

The plot of Doom 2016 adds a good bit of flavour with the extra bandwidth that a modern reboot allows. The Doom Slayer spends his time in hell surviving and murdering legions of demons which earns him the title of Doom Slayer. He killed so many demons that he’s now revered as some sort of devil himself in their world, which leads to the demons imprisoning him in a tomb so that he can’t wreak havoc anymore.

This doesn’t last too long as the UAC discovers his whereabouts and the big boffin Samuel Hayden unlocks the sarcophagus he was kept in, previously separating the Doom Slayer from his all-powerful armor. Mr. Doom Slayer esquire leaps at the chance to murder more legions of demons, ignoring explanations and flavour text in favour of creating fine red mist out of his subjects. The UAC are trying to sap energy from Hell to solve problems on Earth, as we’re running out of usable energy and have turned our home into its own version of Hell in the near future (sounds familiar!) One scientist, Olivia Pierce, turns heel and sides with the demonic forces, attempting to wrangle ultimate power with a sanguine pact. Following this, you continue through the underbelly of Hell with your arsenal of evil until the game introduces a magical blade known as The Crucible which both parties are trying to capture in order to wipe out all the demons or in Olivia Pierce’s case, create a portal to Hell that can be used as often as necessary.

The Doom Slayer doesn’t take the challenge lying down and he ventures deeper into Hell, murdering hordes of terrible monsters and finally confronting Olivia Pierce, who is now a massive spider monster (that’s what you get!)

The Doom Slayer defeats Pierce and stops her portal plan. Unfortunately, Samuel Hayden, the head honcho of the UAC and supposed friend of the Doom Slayer has other plans. He nicks The Crucible, teleports Doomguy to an unknown area and declares that it must be used to help Earth, whatever the cost. How nefarious!

Doom Eternal Plot: What could happen in the sequel?

If you remember when we were talking about the original Doom games in the 90s, you’ll know that the second game in the series is Doom 2: Hell on Earth. With the reboot it looks like iD Software is following a very similar path, and as such, Doom Eternal will see the Doom Slayer heading to Earth to liberate humanity from the thrall of the demon hordes. He’ll most likely decapitate that pesky Samuel Hayden at some point too. He’s not one for letting go of grudges.

Doom Eternal will take place on Earth soon after the events of Doom 2016 and features a closer aesthetic resemblance to the original 90s games. It’s thought that we’ll learn a lot more about the eponymous Doom Slayer throughout the course of Doom Eternal, so keep on the lookout for audio logs and diaries to read when you pick up the game later this year. The game is also set to introduce a number of new demons from Doom lore and a lot of updated models for existing creatures. This is great if you’re new to the game, arriving with the Bethesda-published reboot series. It’d be super cool to see a continuation of the inclusion of mini-games that depict older versions of Doom much like the rebooted Wolfenstein series, which toys with the nostalgia factor quite considerably.

However, as well as the doomed skyscrapers and ruined commercial districts as seen in the game’s trailers, we’ll also be headed to the moon of Mars, Phobos, for an excursion into madness. Who knows what chaos awaits us there, but let it be known that our protagonist will be ready to demolish whatever is in his way!